Superintendent: Discipline not needed for teen before Michigan school shooting 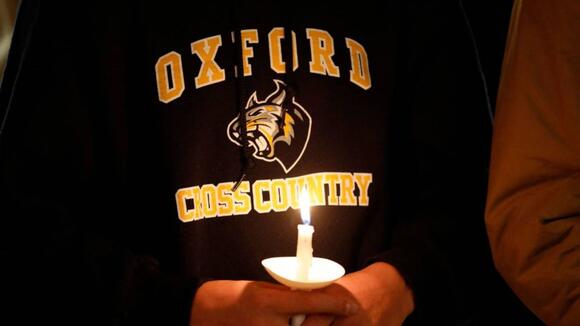 OXFORD TOWNSHIP, Mich. — The superintendent of a Michigan school district where a mass shooting claimed the lives of four students said that no discipline was necessary for the teen who was called to his high school office hours before he opened fire.

In the video, Throne said that Ethan Crumbley, 15, did not have a disciplinary record at Oxford High School, where four students were killed and seven others were injured. The video confirmed the comments of Oakland County Sheriff Michael Bouchard, who said Wednesday that the suspect had met with high school officials the day before and morning of the shooting to discuss his behavior.

“There’s just been a lot of talk about the student that was apprehended, that he was called up to the office and all that kind of stuff,” Throne said in the 12-minute message. “No discipline was warranted. There are no discipline records at the high school. Yes, this student did have contact with our front office. And yes, his parents were on campus.”

Throne added that he could not comment further about Crumbley.

Thorne also acknowledged that Crumbley’s parents were at Oxford High School on Tuesday, the day of the shooting, the Free Press reported.

Throne said Oxford High School looks like a “war zone” and will not be ready to reopen for weeks, according to the video.

“To say that I am still in shock and numb is probably an understatement,” Throne said in the video.

Crumbley pleaded not guilty on Wednesday during a virtual appearance to charges including first-degree murder and terrorism causing death. A judge ordered him held without bond ahead of his trial. Crumbley is being charged as an adult.

Earlier Thursday, Oakland County prosecutor Karen McDonald repeated her criticism of Crumbley’s parents, saying their actions went “far beyond negligence” and that a charging decision would come by Friday, The Associated Press reported.

“The parents were the only individuals in the position to know the access to weapons,” McDonald said. The gun “seems to have been just freely available to that individual.”

Throne said in the video that he was about to visit with the first of the parents of the deceased students.

“I’ll be doing that three more times,” he said.

The Oakland County Sheriff’s Office identified the slain students as Hana St. Juliana, 14; Tate Myre, 16; Madisyn Baldwin, 17; and Justin Shilling, 17. Seven other people between the ages of 14 and 47 were also injured, officials said.

PITTSBURGH — A shooting Wednesday afternoon outside Pittsburgh’s Oliver Citywide Academy left a student in critical condition, according to WPXI. The incident happened around the time classes were dismissed for the day, Pittsburgh Public Schools officials told WPXI. Two people approached a school van and shot into the van, injuring a 15-year-old boy inside, according to the news station.
PITTSBURGH, PA・33 MINUTES AGO
WFTV Channel 9 Orlando

SNOWFLAKE, Ariz. — An Arizona man was taken into custody after allegedly admitting to investigators he had a grenade, and then threatening to make another. Investigators with the Navajo County Sheriff’s Office said they were called to the house in Snowflake, Arizona, for a report about a possible explosive device at the home, The Associated Press reported.
SNOWFLAKE, AZ・5 HOURS AGO
WFTV Channel 9 Orlando

HENDERSON, Tenn. — A dog has been reunited with its owner in New York, after disappearing five years ago and traveling 1,000 miles across the country to Tennessee. The dog, Azzurra Diamante, disappeared from a home in Queens, New York, in 2016. Jen Costa, Azzurra’s owner in New York, said she spent months trying to track down her dog, and eventually assumed someone took the dog with no plans of returning her, WBBJ reported.
HENDERSON, TN・5 HOURS AGO
WFTV Channel 9 Orlando

Missouri ‘Emergency Alert’ sent out with references to Batman

A big mistake left many people confused when the Missouri State Highway Patrol accidentally sent a message to people that included references to Batman. The message was for Gotham City, Missouri, which does not exist, and for a purple-and-green 1978 Dodge, which is the car used by the Joker in the 1989 movie “Batman,” The Saint Louis Post-Dispatch reported. The license plate listed on the alert read “UKIDME.”
PUBLIC SAFETY・4 HOURS AGO
WFTV Channel 9 Orlando

MANASSAS, Va. — A former cab driver who shot a Virginia police officer in the head in 2013 — and was later released after being found not guilty by reason of insanity — pleaded guilty Tuesday to setting his therapist’s home on fire in 2019. Kashif...
MANASSAS, VA・4 HOURS AGO