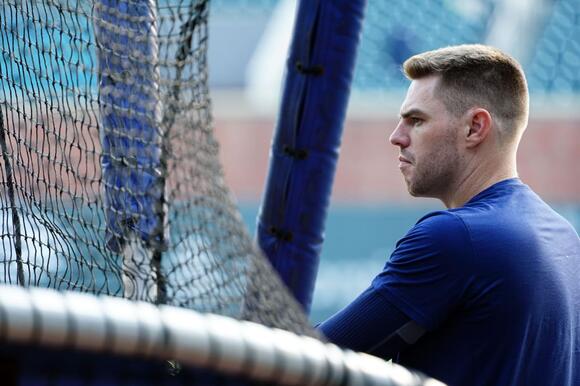 Could he be going back to Cali?

With Corey Seager going to the Rangers , many are not wasting any time in trying to find a replacement for the slugger in Los Angeles. Ken Rosenthal of The Athletic, as well as a few others, have connected the Dodgers to free-agent Freddie Freeman in recent weeks . John Heyman thinks that the Dodgers may have the best chance of luring him away from Atlanta.

AM570 host Dave Vassegh revealed that Dodger players are now focused on the 2020 MVP.

Of course, having players wanting their team to sign one of the top free agents on the market after losing a key player is nothing unusual. But this seems to be more than just wishful thinking, according to Vassegh.

“They are engaged in talks right now. And what makes this all the more interesting is, Freddie Freeman, from my understanding, talking to people close to him, he has grown very impatient with the Atlanta Braves. Because the Atlanta Braves were taking the strategy of wait and see where the market goes before offering him a contract. So, to my knowledge, the Braves have not offered Freddie Freeman any sort of contract which has made him grow very impatient. And, when a door closes, there’s another one that opens and Andrew Friedman usually steps right through it.

Adding Freeman would enable the Dodgers to get creative and potentially move Max Muncy from first base to second, while Trea Turner takes over at shortstop. That's one heck of an infield. Since making his debut in 2010, the 32-year-old has been one of the best hitters in baseball. Furthermore, his bat is as good or better than Seager's while remaining healthy more often than not. In his career so far, Freeman has played at least 147 games in 8 of 11 seasons, including the Covid shortened one.

If Andrew Friedman manages to perform some more trade magic, as he has been known to do, and land the coveted first-baseman, odds are they'll be World Series favorites again next season. The Dodgers should just hurry up with an offer and sign Freddie because $180 million over six years for such a skilled veteran is definitely a bargain.

When it comes to the 2022 campaign, one of the most asked questions for Dodgers fans is what will become of starting pitcher Trevor Bauer. He's in his second year of a three-year, $102 million contract, but he was put on paid administrative leave last season after accusations of sexual assault ...
PASADENA, CA・20 DAYS AGO
Inside The Dodgers

Tyler White agreed to terms for a minor league contract with the Milwaukee Brewers.
MLB・2 DAYS AGO
Inside The Dodgers

ESPN Buster Olney thinks Treinen is one of the bullpen arms in baseball.
MLB・2 DAYS AGO

Jonathan Papelbon joined Rob Bradford on the Live BP podcast to make it clear he has no intention of following in the footsteps of his former teammate Jon Lester, saying he will never announce his retirement.
MLB・13 HOURS AGO

The New York Mets announced their international free agent signings on Saturday, led by outfielder Simon Juan, ranked No. 16 overall by MLB Pipeline.
MLB・2 DAYS AGO
Inside The Blue Jays

Despite 609 career home runs and seven All-Star appearances, the former Cubs slugger hasn't come close to being elected in his nine years.
MLB・12 HOURS AGO

Jonathan Papelbon joined WEEI’s Live BP Show and spoke about the backstory behind why he and Bryce Harper went at it in the Washington Nationals dugout in 2015.
MLB・9 HOURS AGO
Inside The Dodgers

The Dodgers outfielder Propagate media company will be producing films, TV shows, and podcasts.
TV SHOWS・4 HOURS AGO
670 The Score

The Chicago White Sox and 23-year-old Cuban outfielder Oscar Colas have agreed to a $2.7-million deal, MLB.com reported Saturday. He was the fifth-ranked international prospect in this class.
MLB・2 DAYS AGO
The Spun

The middle of January traditionally signals the changing of the seasons in Chicago, a time to wash away the gloom of another Bears disaster and start thinking warm thoughts. In most years, the sidewalks are caked in ice, another polar vortex is plunging down from the Arctic and the Cubs and White Sox are holding their annual fan fests at a downtown hotel, celebrating the past while hyping the ...
NFL・14 HOURS AGO