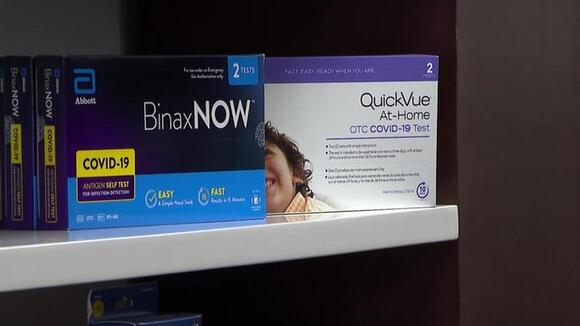 President Biden says people will soon be able to get free, at-home COVID tests as part of his plan to combat the virus, but just how reliable are those tests.

Like a lot of pharmacists, Wael Isaac offers COVID testing to customers.

Isaac also sells two brands of at-home COVID tests, which promise results in minutes, but can those results be trusted?

"Some brands of the at-home tests, they give false positive results, so we don't recommend it too much for people," says Isaac.

In late November, the FDA announced a phase one recall, the most serious kind, of two million Ellume home COVID tests.

The agency says the tests gave an unacceptable number of false positives. Only certain lots were affected, and the test is one of over a dozen home tests approved by the FDA.

Team 12 checked out three of the top selling home COVID tests. They're all pretty easy to use--you take a swab from your nostrils and the test looks for small viral proteins called antigens. The good news--you'll get results in as little as 15 minutes instead of days for a lab test. However, the lab tests are nearly 100% accurate, home tests don't come close.

In clinical trials, the best-selling home test, Abbott's Binax Now, detected the virus 84.6% of the time.

Another top seller, the Quidel Quickvue, caught 83.4% of COVID cases.

In fact, experts say we can expect home COVID tests to be about 85% accurate. That may sound good until you consider that on average, for every 100 people with COVID take a home test, 15 will wrongly get told they are not infected.

"If you are symptomatic, then that's really where the at-home tests again, which are less sensitive, aren't your best option," says Dr. Shereef Elnahal, president of University Hospital in Newark.

Elnahal says if you think you might have COVID, don't trust a home test. Go the extra mile and use a test that's processed by a lab.

"The risk of missing a positive test can be a risk to you, but also for the population. Making sure you do that PCR test when you have symptoms is really important," says Elnahal.

Team 12 also uncovered research that found that in the real world, home tests aren't as accurate as clinical trials indicate.

Isaac believes that's because getting accurate results is harder than it looks.

"The technique of taking the sample, it's not like a technician doing 100 samples every day," says Isaac. "So, I try to do it myself, from my nose, and when I stick it, I don't take the sample because I'm afraid."

"Yes, they don't take the right position for the sampling," says Isaac.

So, when are home COVID tests recommended?

Elnahal says they're great for routine screening, like before traveling, attending a large event, or visiting an elderly relative.

"In other words, it's a little bit lower of a risk," says Elnahal. "You know, the implications of missing a test wouldn't be that dire."

There's one other group of people who should be careful with home COVID tests--people with color deficient vision. With this test, the difference between a negative and inconclusive result comes down to whether this line is blue or pink.

If you could have trouble telling the difference, the test probably isn't right for you.

I'm convinced that at least half the tests are tainted with the virus and newer variants just like they where in the beginning...so changed mind!

All Democratscrats have shares interest in this companies 64 of the representatives got in business last January with the vaccine companiesso what that tells you.....

Two anti-viral pills that can fight off COVID-19 are now being offered at select pharmacies in New Jersey.
PUBLIC HEALTH・2 DAYS AGO
News 12

Advocates say there's little to no help to ease the financial burden of this debilitating condition.
WHITE PLAINS, NY・1 DAY AGO
News 12

Buy a drink, get a COVID-19 test: New Jersey restaurant encouraging diners to get tested

Buy a drink and get a COVID-19 test -- that's how Cenzino Ristorante in Oakland is encouraging diners to get tested.
OAKLAND, NJ・2 DAYS AGO
AZFamily

PHOENIX (3TV/CBS 5) -- At-home COVID-19 tests are becoming pricey and hard to find, but it seems like a lot of people are turning to this testing method, and now, there is some good news if you have. You could be getting reimbursed for the cost as early as next week.
PHOENIX, AZ・9 DAYS AGO

Tested positive for COVID-19, but have mild symptoms? Here's how to recover at home

SAN ANGELO, Texas — With the rise in COVID-19 cases, many people are experiencing symptoms that are not severe enough for a trip to the emergency room. Health professionals shared different ways people who have tested positive to COVID-19 can recover at home from the virus. “Tylenol or Motrin...
PUBLIC HEALTH・12 DAYS AGO
Complex

The Biden administration is sending at-home COVID-19 tests starting next week, and will allow Americans to redeem tests at no cost through their insurance, too. Starting Saturday, Jan. 15, Americans with private insurance will be able to purchase at-home testing kits online or in stores, and get them reimbursed through a simple claim with their insurer. In order to do so, a receipt must be provided, and tests will not be subject to deductibles. Insurers have since detailed a list of the preferred storefronts and pharmacies through which to purchase these tests, as they will only reimburse up to $12 per test.
PUBLIC HEALTH・1 DAY AGO
FOX 17 News West Michigan

An online trend of using COVID tests to swab the throat instead of the nose is causing concern among health experts.
KENT COUNTY, MI・2 DAYS AGO
CBS News

COVID-19 testing kit tracker: How and where to find at-home coronavirus tests

CBS Essentials is created independently from the CBS News staff. We may receive commissions from some links to products on this page. Promotions are subject to availability and retailer terms. If you're reading this, then chances are you already know that COVID-19 antigen tests are hard to find on store...
PUBLIC HEALTH・1 DAY AGO

SAN FRANCISCO -- The recent outbreak of the omicron variant has many people running for the store for an over-the-counter rapid test. But simply taking the test once isn't enough to tell you if you have contracted COVID-19. So you think you've been exposed to COVID-19? You run to the store and pick up a rapid test. It comes up negative. You're in the clear...right?
PUBLIC HEALTH・10 DAYS AGO
keranews.org

As the omicron variant of the coronavirus continues to spread, more people are using at-home, rapid antigen tests to determine whether it’s safe to interact with people without spreading the virus. These antigen tests are pretty accurate — a recent study found they correctly identify 79% of negative COVID-19...
PUBLIC HEALTH・3 DAYS AGO
tucson.com

How to Get Free At-Home COVID-19 Tests: 5 Key Details About the Government’s New Plan

Starting Jan. 15, you can get certain at-home coronavirus tests for free — or get reimbursed if you pay upfront — so long as you have private health insurance. President Joe Biden unveiled the at-home testing program in early December as part of his administration’s winter COVID-19 agenda, but the administration was tight-lipped about the details for more than a month. The White House provided more specifics Monday.
U.S. POLITICS・4 DAYS AGO
erienewsnow.com

Home COVID-19 Rapid Tests Will be Free To Insured Americans Starting Saturday, But How Exactly Will the Program Work?

Starting January 15, most at home COVID-19 tests that consumers buy online or at their local drug store or pharmacy will be free under a new Biden administration police outlines January 10. Over the holidays, finding home test kits locally was difficult, but Erie News Now found today, that tests...
ERIE, PA・3 DAYS AGO

How to report your positive at-home COVID-19 test result

As COVID-19 infections surge across Ohio to levels not seen since last winter, many residents are using at-home self-administered tests to determine whether it's safe to go to work or gather for holiday celebrations. The results of many of those at-home tests are not reported to health authorities to be...
PUBLIC HEALTH・12 DAYS AGO
beckershospitalreview.com

Amid surging demand for rapid COVID-19 antigen tests, a small real-world study suggests they may not be a reliable tool to curb transmission. Preliminary results published Jan. 5 in MedRxiv indicated people infected with the omicron variant were contagious for several days before rapid antigen tests detected a positive result. Researchers conducted a retrospective study among 30 people diagnosed with COVID-19 between Dec. 1 and Dec. 31 in what were likely omicron outbreaks across five workplaces in New York, Los Angeles and San Francisco. The participants underwent both polymerase chain reaction testing — considered the gold standard of COVID-19 diagnostics — and rapid antigen testing.
PUBLIC HEALTH・9 DAYS AGO
theridgewoodblog.net

Ridgewood NJ, as the SARS-CoV-2 virus mutates over time, changes in its genetic makeup could impact the ability of certain tests to recognize and detect viral antigens. A preprint study posted to medRxiv this week raises questions about the reliability of at-home rapid antigen tests in the early days of infection with the highly mutated Omicron variant of concern (VOC). The small real-world study, which is not yet peer-reviewed, examined test results from 30 people who, because of their workplace rules, were undergoing both rapid antigen and polymerase chain reaction (PCR) tests on a daily basis. On days 0 and 1 following a positive PCR test, both of the at-home rapid antigen tests in use—Abbott BinaxNOW and Quidel QuickVue—produced false-negative results despite the presence of viral loads high enough for transmission. The researchers confirmed that 4 cases transmitted the virus between false-negative test results and noted there likely were more transmissions that were unconfirmed. On average, it took 3 days for people to test positive on a rapid antigen test after testing positive on a PCR test. The researchers shared their results with US CDC and US FDA officials and called for the real-world performance of rapid antigen tests to be reassessed for each new VOC.
RIDGEWOOD, NJ・6 DAYS AGO
Houston Chronicle

Is your at-home COVID-19 test real? Know how to spot the fakes

AUSTIN—Before you buy an over-the-counter COVID-19 test, how do you now if it’s the real deal?. The Federal Trade Commission issued guidance after the FDA started seeing fake or not FDA-authorized tests floating around; these were mainly tests people bought online. Here is the commission’s guidance as well...
PUBLIC HEALTH・2 DAYS AGO
WGME

Ask the I-Team: Are at-home COVID-19 tests reimbursable through insurance?

At-home COVID-19 tests have been flying off the shelves over the past month, especially as families gathered together for the holidays. “I thought I was understanding on various news programs that COVID home tests are reimbursable through private insurance. I called my insurance company, Martin's Point, and was told they are not. Can you clarify this information? Are home tests reimbursable?”
TRAVEL・12 DAYS AGO
inquirer.com

As people continue to struggle to find COVID-19 tests, President Joe Biden’s administration announced that patients can have their health insurance pay for at-home tests they purchase. On Monday, the White House announced that starting Jan. 15, anyone who purchases an FDA-approved at-home COVID-19 test will be able to...
PUBLIC HEALTH・3 DAYS AGO
NBC San Diego

More and more parents are testing their children for coronavirus at home, whether schools handed them at-home testing kits or if it’s because they want to visit other family members. Many parents are always concerned to know if their children are positive for COVID-19, and many are unsure if...
NATIONAL CITY, CA・14 HOURS AGO