Why Antonio Brown Was Suspended But Aaron Rodgers Plays on 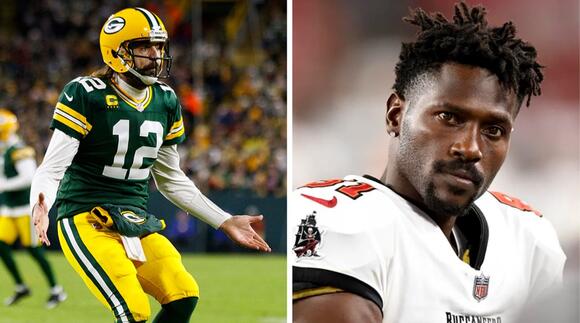 The Bucs wide receiver is out due to a fake COVID-19 vaccine card while the Packers quarterback faced a fine for attending a Halloween party.

As news broke that Antonio Brown had been suspended three games for misrepresenting his vaccination status , it left people wondering why Aaron Rodgers did not face the same fate.

Last month, the Bucs wide receiver was accused by a former live-in chef of obtaining a fake vaccination card in an apparent attempt to duck the NFL's vaccine protocols. As Sports Illustrated 's Conor Orr wrote , "this is a felony offense in certain states as the falsifying of the document would have to include the forging of government seals."

"Tampa Bay's Antonio Brown and Mike Edwards have each been suspended without pay for the next three games," the NFL's announcement says . "Free agent John Franklin III, if signed by a club, is also ineligible to play in the next three games. All three players have accepted the discipline and waived their right of appeal. The suspensions are effective immediately."

Meanwhile, Packers quarterback Rodgers tested positive for COVID-19 , but during the offseason, he told reporters he was “immunized.” Throughout the season, he did attend press conferences maskless, saying on The Pat McAfee Show , "Some of the rules to me are not based in science at all. They're based purely in trying to out and shame people. Like needing to wear a mask at a podium when every person in the room is vaccinated and wearing a mask makes no sense to me."

In response to claims he did not follow protocols for unvaccinated players, Rodgers said: "I have followed every single protocol to a T, minus the one I just mentioned, which makes absolutely no sense to me."

As Orr previously reported , it was not entirely clear if Rodgers broke league protocols in those instances.

Rodgers reportedly only received a $14,650 fine, along with wide receiver Allen Lazard, because the pair attended a Halloween party, per Mark Maske of The Washington Post . The league also reportedly issued a $300,000 fine to the Packers for violating the COVID-19 protocols established by the NFL and the NFL Players Association, according to ESPN's Rob Demovsky.

One of the major sticking points between the two cases is whether they operated under their given COVID-19 vaccination status. Rodgers largely did, as he mentioned on The Pat McAfee Show , while Brown operated as a vaccinated player. Although his lawyer says the wide receiver is vaccinated, it's unknown when that occurred.

For more news on the Tampa Bay Buccaneers, head over to All Bucs .

"It’s a big story. You’ve got to just focus on what you've got to focus on." Even for Rob Gronkowski, who has experienced his fair share of wild scenarios in the NFL, Antonio Brown’s dramatic departure from the team seemed like a big deal. “When things like...
NFL・2 DAYS AGO
NESN

In wake of the Broncos landing their new head coach, many already are banking on Aaron Rodgers taking his talents to Denver. Denver on Wednesday night reportedly hired Nathaniel Hackett, who served as the Green Bay Packers offensive coordinator the last three seasons. Rodgers on several occasions has vocalized how highly he thinks of Hackett and the Mile High City should be an attractive quarterback destination for a variety of reasons.
NFL・1 DAY AGO
The Spun

Late Tuesday night, a report emerged suggesting Aaron Rodgers and Davante Adams “would love” to team up on one NFL team. According to a report from NFL insider Jordan Schultz, Rodgers and Adams are looking into taking their talents to Denver to play for the Broncos. That, of course, would have to be approved by the Packers.
NFL・2 DAYS AGO
USA TODAY Sports Media Group

The Baltimore Ravens ended their 2021 season on a six-game losing streak and now turn their attention to the 2022 offseason. They will have many opportunities to improve their roster over the coming months, as they have a few big needs that need to be taken care of. One position...
NFL・2 DAYS AGO

NFL star Antonio Brown said his team tried to pay him to go to a mental health facility after he left the team during a game.
NFL・2 DAYS AGO
Sportsnaut

Super Bowl 2022: The Tampa Bay Buccaneers are the reigning NFL champions, but who'll make the playoffs — and lift the Lombardi Trophy at the end of this season?
NFL・2 DAYS AGO
CowboyMaven

The Denver Broncos sifted through 10 candidates, then whittled down to three their list, all along thinking Dallas Cowboys defensive coordinator Dan Quinn was the guy worthy of being "zeroed in on.''. But early Thursday morning, the decision was made that separated Quinn and the third candidate, Los Angeles Rams...
NFL・2 DAYS AGO
Popculture

Aaron Rodgers knows NFL fans were happy to see him and the Green Bay Packers lose in the playoffs. On Tuesday, the Packers quarterback appeared on The Pat McAfee Show and said NFL fans wanted him to lose because of his "divisive" status on the COVID-19 vaccine. "There was a...
NFL・2 DAYS AGO

The Broncos became the first of the nine NFL teams with coaching openings to hire a head coach. On Thursday morning, it was reported that the team agreed to bring Packers offensive coordinator Nathaniel Hackett on board to replace Vic Fangio. Hackett has 13 years of NFL experience and has...
NFL・1 DAY AGO
The Spun

With Aaron Rodgers’ future on the Green Bay Packers more in doubt than ever before and many calling for the two sides to move on, ESPN’s Mike Greenberg has weighed in. On Wednesday’s edition of Get Up, Greenberg advocated for Rodgers to take his talents to the Bay Area and join the San Francisco 49ers. He argued that Rodgers should have gone No. 1 overall to the 49ers in the 2005 NFL Draft, and this is a chance for them to correct that mistake.
NFL・2 DAYS AGO
Sports Illustrated

Report: Aaron Rodgers ‘Would Be Interested’ in Playing for Broncos in 2022

Denver has been attached to Rodgers as a potential destination since last spring.
NFL・2 DAYS AGO
The Spun

The Professional Football Writers of America have announced their MVP for the 2021 NFL season. For the second season in a row, the title is being awarded to Green Bay Packers quarterback Aaron Rodgers. In his 17th NFL season, Rodgers continued to show why he’s considered one of the league’s...
NFL・2 DAYS AGO

Antonio Brown appeared on HBO’s “Real Sports” Tuesday to clear the air about his departure from the Tampa Bay Buccaneers, including whether he has beef with Tom Brady.
NFL・2 DAYS AGO
BIN: Black Information Network

'There's no reason I'm in this position at this point,' the former Tampa Bay receiver said.
NFL・2 DAYS AGO
Insider

With just two games left before Super Bowl LVI, there's still plenty to bet on this weekend, from first touchdown scorer to a slew of prop bets.
NFL・2 DAYS AGO
CBS Sports

I haven't talked to anyone at the NFL yet, but I feel like someone needs to ask the league if we can push the conference title games back a week because I think we all need some extra time to recover from the divisional round. If this picks column is completely incoherent, it's because my brain is still trying to process everything that happened.
NFL・2 DAYS AGO
Audacy

Aaron Rodgers: Fans rooted against us because I'm unvaccinated

Packers quarterback Aaron Rodgers says fans tuned in specifically to watch him lose Saturday against the 49ers, rooting against him because he’s unvaccinated.
NFL・2 DAYS AGO
NBC Sports

Aaron Rodgers is the PFWA MVP

The woke mob apparently has not infiltrated the Pro Football Writers of America. The PFWA has named Packers quarterback Aaron Rodgers the 2021 MVP. Rodgers has from time to time blamed the media for whatever it is that he happens to be complaining about at any given time. He primarily believes fans and media hold a grudge against him because of his vaccination status.
NFL・2 DAYS AGO
blackchronicle.com

GREEN BAY, Wis. — In the NFL, the grass isn’t always greener on the other side. Sometimes, however, it is softer. Chances are no one has that on their list of things quarterback Aaron Rodgers might consider when he decides whether to return to the Green Bay Packers for an 18th season or try to win another Super Bowl in a different uniform — assuming he doesn’t retire.
NFL・2 DAYS AGO
The Spun

Not many NFL quarterbacks can say they played for just one team for their entire professional career. The two-time Super Bowl-winning quarterback spent his entire career with the New York Giants before retiring. He believes Aaron Rodgers should do the same. With speculation growing regarding Rodgers’ future in Green Bay,...
NFL・2 DAYS AGO