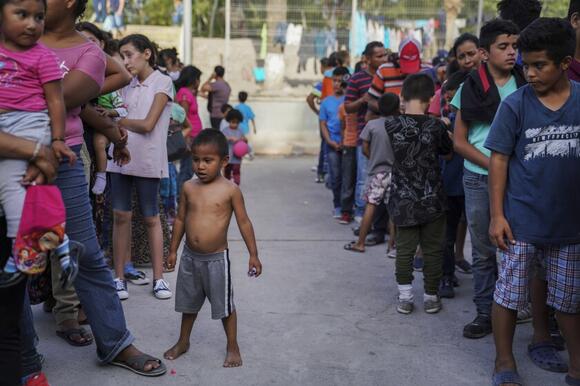 The editorial board operates independently from the U-T newsroom but holds itself to similar ethical standards. We base our editorials and endorsements on reporting, interviews and rigorous debate, and strive for accuracy, fairness and civility in our section. Disagree? Let us know .

The Biden administration’s announcement Wednesday that it had reached an agreement with Mexico — on a resumption of the Trump administration’s policy of requiring migrants looking to enter the United States to stay in Mexico while they wait for immigration hearings — was not a decision it wanted. President Joe Biden has called the policy cruel and inhumane. But a federal judge in Texas, acting at the behest of Texas and Missouri, held that the “Remain in Mexico” policy was canceled in a capricious fashion on Biden’s first day in office, and the majority of the U.S. Supreme Court agreed.

The president should take the formal steps needed to cancel the policy in a way that courts accept. But in the meantime, Biden must follow through on pledges made to Mexico to improve the safety of asylum-seekers waiting near the border for their hearings, to ensure their access to attorneys and to protect them from COVID-19 by administering the one-shot Johnson & Johnson vaccine.

In the longer term, the president and Congress need to allocate significantly more resources to the asylum process and fully reverse course from the callous policies of Donald Trump, who opposed the entry of any asylum-seeker, including those with legitimate fears for their safety if returned to their home countries. He ignored the clear intent of the Refugee Act of 1980 . Biden, thankfully, will not.

While Biden has said he plans to seek another White House term, Trump has not confirmed that he'll enter the race.
PRESIDENTIAL ELECTION・1 DAY AGO
Fox News

Charlamagne Tha God blames Biden, Sinema, Manchin for 'the death of the Democratic Party as we know it'

Liberal radio personality Charlamagne Tha God took aim at President Biden and Sens. Kyrsten Sinema, D-Ariz., and Joe Manchin, D-W.V., declaring the three of them as "responsible" for the "death of the Democratic Party as we know it." "People are asking if we are witnessing the death of democracy in...
PRESIDENTIAL ELECTION・1 DAY AGO
The Guardian

Romney, Cheney and others were hailed as the conscience of the party but their deeds in the Senate have provoked accusations of hypocrisy
PRESIDENTIAL ELECTION・1 DAY AGO
Wyoming News

(The Center Square) – The Laredo, Texas, home and campaign office of Democratic U.S. Rep. Henry Cuellar, a vocal critic of the president, was raided by the FBI on Wednesday. More than a dozen federal agents were seen entering and leaving Cuellar’s Laredo residence removing bags, bins and at least one computer, The Monitor of McAllen first reported. Local news reports also show agents at his campaign office. "The FBI...
LAREDO, TX・2 DAYS AGO

Pence has previously said that the decision in Roe v. Wade should be thrown on "the ash heap of history."
PRESIDENTIAL ELECTION・20 HOURS AGO
POLITICO

The judge ruled that opponents of Biden's vaccination mandate for federal employees were likely to succeed at trial and blocked the government from enforcing the requirement.
PRESIDENTIAL ELECTION・1 DAY AGO
Newsweek

After a Year in Office, How Biden's Approval Rating Stacks Up Against Trump's

Joe Biden is going into his second year in office with a low approval rating that's only a few points higher than Donald Trump's, a historically unpopular president.
PRESIDENTIAL ELECTION・2 DAYS AGO
The Guardian

FIRST ON FOX: Dozens of Republican lawmakers in the House and Senate are requesting the Department of Homeland Security’s Office of Inspector General (DHS OIG) launch an investigation into the actions taken by the Biden administration in relation to the crisis at the southern border. More than 100 lawmakers,...
PRESIDENTIAL ELECTION・2 DAYS AGO
The Guardian

How should one feel about the first year of the Biden presidency?. I can’t really say I’m disappointed, since I didn’t have high hopes going into it. But I do feel dread. This last year has felt a bit like being trapped in a nail-biting intermission between two horror films. The opening instalment consisted of Donald Trump’s first four years in office – it ended with the cliffhanger of a deadly plague and a surreal, poorly executed, but still terrifying ransacking of the Capitol. The sequel practically writes itself, as the man ascends to power a second time, even more emboldened and determined to hold on to power.
PRESIDENTIAL ELECTION・2 DAYS AGO

President Joe Biden is signaling that monthly payouts for an expanded child tax credit probably won't make a comeback, even as he aims to get Congress to pass other parts of his social-spending and climate package.
PRESIDENTIAL ELECTION・2 DAYS AGO
Newsweek

Trump wouldn't commit to a 2024 run but seems to think Biden's presidency would help him in an election.
PRESIDENTIAL ELECTION・2 DAYS AGO
The Independent

Donald Trump has tried to twist President Joe Biden’s words to falsely argue that the 2020 election was fraudulent, despite having no evidence to support the repeated claims. “President Biden admitted yesterday, in his own very different way, that the 2020 election may very well have been a fraud, which I know it was,” the former president said in a statement on 20 January, the anniversary of his last day in office. “I’m sure his representatives, who work so hard to make it look legit, are not happy.”During his first press conference of 2022 on Wednesday, Mr Biden was...
PRESIDENTIAL ELECTION・2 DAYS AGO

The most successful line of attack against a potential Trump 2024 candidacy will likely come from the populist right.
FLORIDA STATE・2 DAYS AGO
Fox News

The New York Times suggests President Biden should take a note out of his predecessor’s playbook and loosen up on coronavirus restrictions to appeal to voters, based on a new focus group. The study made up of 14 independent voters revealed that most participants don’t obsess over COVID-19 and...
PRESIDENTIAL ELECTION・2 DAYS AGO
USA TODAY

A 'brutal crosscurrent': Why Biden's immigration policies are making everyone mad

Immigration advocates' frustrations with President Joe Biden have ballooned as he continues Title 42 and "Remain in Mexico" policies along the border.
PRESIDENTIAL ELECTION・1 DAY AGO
Newsweek

"He absolutely is not predicting that the 2022 elections would be illegitimate," the White House press secretary said after the president declined to say the elections would be fair without voting rights reform.
PRESIDENTIAL ELECTION・2 DAYS AGO