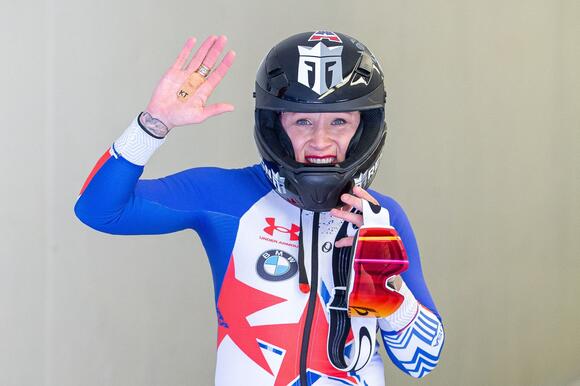 Now that Kaillie Humphries can wear the red, white and blue in Beijing, she’d like to top it with some gold, silver or bronze.

The two-time Olympic gold medalist in bobsled became an American citizen Thursday, making her eligible to represent her adopted country at the Beijing Olympics in February. Humphries had been stateless in the eyes of the International Olympic Committee since asking for her release from Canada in August 2019, a year after she filed a formal complaint alleging verbal and emotional abuse by the Canadian team coach.

“I’m more emotional than I thought I would be,” Humphries said in a statement. “Even though you believe in your application and you know it meets the requirements, you don’t know. When she came back in and said ‘Yes, I’m approving your application for citizenship,’ then it was real.”

Humphries has lived in the United States since 2016, and been married to an American, former bobsledder Travis Armbruster, since 2019. That’s the same year she began representing the United States on the World Cup circuit and at the world championships, where she has won the last two titles in two-man as well as the inaugural title in monobob.

But the IOC has more stringent rules than individual sport federations, requiring athletes to be citizens of the countries they represent. While Humphries was eligible for U.S. citizenship, she had to undergo the same laborious process as everyone else, a process made even longer because of a backlog created during COVID-19 shutdowns.

Initially told she might not be granted citizenship in time for Beijing, Humphries’ cause was bolstered by the U.S. Olympic and Paralympic Committee and USA Bobsled, as well as Congressional representatives from both parties.

2022 OLYMPICS: Will the omicron variant impact Beijing Games? Here's what we know.

CHASING GOLD: Stay up to date on the latest news and features ahead of 2022 Olympics

Humphries never asked for special treatment, said her immigration attorney, John Exner. They instead made the case that she qualified for the process by which approval for citizenship can be expedited.

“I strongly believed in the legal basis for her application. I knew we had an approvable case,” Exner told USA TODAY Sports. “Nothing in immigration is a guarantee, and you always know there’s a possibility things can get denied and things can not go your way. But I was fairly optimistic from the get-go.”

Humphries is in Europe for the World Cup circuit, but posted on Instagram on Wednesday night that she was flying back to San Diego for “24 hours.” She had to do an interview with U.S. Citizenship and Immigration Services before her application was granted final approval.

Now that it has been, Humphries can focus on Beijing -- and bringing some hardware home to her new country.

“This is a country that I very much love and have grown accustomed to. It's where I have chosen to raise my family and where I choose to live and the community I choose to be a part of,” Humphries told USA TODAY Sports last month. “To be able to give back to the country as a whole, to sing the Star-Spangled Banner and wear the red, white and blue, it's very empowering for me, and I am so excited to do everything I can to live out that dream.”

Beijing 2022 Olympics have confirmed 72 COVID-19 cases among the 2,586 personnel brought in for the Games, and that total is expected to rise.
WORLD・1 DAY AGO
The Independent

Great Britain will take a squad of 50 athletes to the Winter Olympics in Beijing next month after speed-skater Ellia Smeding was confirmed as the final member of the team on Monday.The team, featuring three returning medallists in Izzy Atkin, Laura Deas and Eve Muirhead is Britain’s smallest for a Winter Games since 2010 in Vancouver, when Amy Williams won the only medal in women’s skeleton.The 23-year-old Smeding, whose boyfriend Cornelius Kersten is also in the team, is the first British long-track speed-skater to qualify for a Games since Kim Ferran and Mandy Horsepool in 1980.Smeding said: “Being part of...
WORLD・23 HOURS AGO
San Diego Union-Tribune

Germany's Natalie Geisenberger is a World Cup winner once again, just in time for the Olympics
1 DAY AGO

Australia will send 44 athletes to the Winter Olympics beginning Feb. 4 in Beijing — 23 women and 21 men in 10 disciplines
SPORTS・1 DAY AGO
San Diego Union-Tribune

Lasitskene among 22 Russians given neutral status for 2022

The U.S. Olympic team for the 2022 Winter Games in Beijing will consist of 223 athletes, including 108 women, its second-largest number ever.
SPORTS・18 HOURS AGO
MarketWatch

All the best ways to watch the 2022 Beijing Winter Olympics

Here's how to watch, even if you've cut the cord.
SPORTS・1 DAY AGO

Team GB head to Beijing 2022 hoping to win a record medal tally. Having secured five medals at Sochi 2014, Great Britain matched that total four years later in Pyeongchang. While lacking the overall cross-sport competitiveness, they will travel to China with more than a handful of viable medal contenders. Great Britain have named a 50-athlete team for the event, hoping to better a performance of a sole gold and four bronzes last time around.Here are five of Team GB’s best hopes of a medal at Beijing 2022:Dave Ryding, men’s slalom (alpine skiing)Fresh from becoming the British winner of and...
SPORTS・19 HOURS AGO
NBC San Diego

Ramona Snowboarder to Compete For Team Ireland at 2022 Winter Olympics

Ramona native Seamus O'Connor announced in a Instagram post Monday that he was officially named to Team Ireland for the 2022 Winter Olympics, making him the first Irish athlete to qualify and compete for three winter games. "To everyone that’s had my back and helped get me here - I...
WORLD・14 HOURS AGO
The Guardian

Three years ago, Sylvia Hoffman tried out for NBC’s second season of The Next Olympic Hopeful for one last shot at becoming an Olympic athlete. After tryouts, she laid on a foam roller, stretching out, when she heard two other athletes next to her talking: “The show last year was so great,” they said to each other.
SOCCER・2 DAYS AGO
Fox News

The U.S. Olympics and Paralympic Committee announced its 222-member team that will represent the Stars and Stripes at the Winter Games in China next month. The Olympics are set to begin on Feb. 3 with the opening ceremony set for Feb. 4. The competition ends on Feb. 20. "The Olympic...
SPORTS・6 HOURS AGO

BLAINE, Minn. (WCCO) — Nearly four years ago, the United States Women’s Hockey Team won gold in South Korea. Monday, they’re ready to head back to the Olympics to defend that title, this time in China. Six members of the team are from Minnesota, so it only makes sense the sendoff happened in “the State of Hockey.” There was so much energy and excitement Monday at the National Sports Center in Blaine as fans showed up to show their support for the player. They got a great sendoff as they left the center in a bus. They are heading to Los Angeles before...
BLAINE, MN・11 HOURS AGO