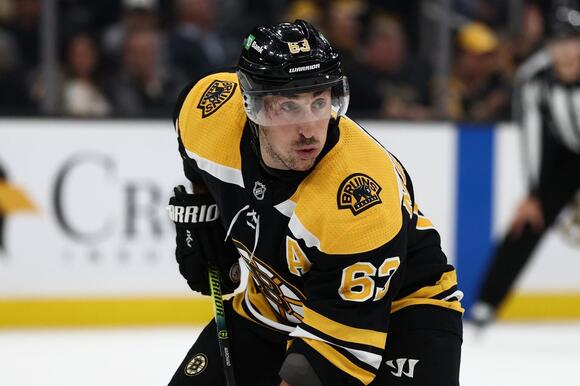 Jack Edwards had some stuff to get off his chest when he joined Merloni & Fauria for his weekly appearance on Thursday.

Asked what he thought about Brad Marchand being suspended three games for slew-footing, NESN’s Bruins play-by-play voice launched into a rant explaining why he thought the suspension was “rubbish.”

“I happen to think the suspension is rubbish,” Edwards began. “I take exception to the way the voiceover was done by the Department of Player Safety, because in slow motion, George Parros seems to be able to read guys’ minds, or he thinks he has that power.

“Because if you look at it in real-time, Marchand is engaging a much taller man in Oliver Ekman-Larsson, he lifts his stick, they both go off-balance, Marchand is trying to balance on the outside edge of his left skate, the contact is on the right side, and naturally he uses his right leg as balance. He follows through with the stick lift and Ekman-Larsson goes down in a backward fashion. But Marchand -- and feel free to disagree -- is no longer that type of player. He doesn’t seek cheap shots. He was trying to get the puck and dislodge Oliver Ekman-Larsson for it.”

Edwards then ripped the NHL’s Department of Player Safety for its inconsistency, pointing out that in the Bruins’ next game against the Red Wings on Tuesday, Detroit’s Michael Rasmussen slew-footed Mike Reilly, did not get a penalty, and did not face any supplemental discipline.

“Two nights ago, against the Red Wings, Mike Reilly gets nailed for a retaliatory crosscheck. Yeah, crosscheck because he got slew-footed!,” Edwards exclaimed. “Did you hear of Rasmussen getting suspended for slew-footing? Rasmussen -- I had our truck replay it -- he aims at Reilly’s heel with the toe of his skate. It was a classic slew-foot! You kick out a guy’s skates from under him. You don’t, as Marchand did, lift your leg to try to balance and flip the guy over your leg. I totally disagree with the suspension.

“Look up slew-footing, and you don’t find the kind of illustrative language that Marchand carried out. You find the sort of language that Michael Rasmussen executed on Mike Reilly. You kick a guy’s skate out from under him, that’s slew-footing. George Parros has turned it into dart-board justice once again. … The DOPS has just been so haphazard in its punishment of players in the last two and a half years that it’s a black box. When you get a call from them, you know they have an agenda.”

Listen to the rant and the rest of the interview with Edwards below:

Brad Marchand and Carolina Hurricanes forward Vincent Trocheck exchanged barbs last week with the Boston Bruins winger comically shutting down what started when Trocheck was asked about an on-ice comparison of the two players. “This is like comparing a Lambo to a Prius,” Marchand wrote in a since-deleted Instagram with...
NHL・1 DAY AGO
NBC Sports

When someone like Ray Bourque talked, Brad Marchand listened. Speaking with reporters on Tuesday, the current Boston Bruins star recalled advice he got from Bourque upon entering pro hockey when he was only 19 years old, words of wisdom which have stuck with Marchand to this day when it comes to interacting with fans.
NHL・2 DAYS AGO
NESN

The Arizona Coyotes reportedly have found a solution to their arena troubles and are finalizing a multi-year agreement with Arizona State University to use the school’s nearly completed, 5,000-seat arena as their home facility. Yes, a 5,000-seat arena would be pretty small in NHL terms. But Boston Bruins winger...
NHL・4 HOURS AGO
NBC Sports

Boston Bruins star Brad Marchand isn't afraid to speak his mind, and he's been doing a lot of that lately. Whether it's voicing his displeasure over NHL players not going to the 2022 Winter Olympics or taking a shot at the Carolina Hurricanes over Twitter, Marchand is a straight shooter.
NHL・9 HOURS AGO

The Boston Bruins had a second period for the ages Wednesday. Well, it was more like an incredible six-minute stretch. First, Jake DeBrusk tied the game between Boston and the Colorado Avalanche at 1-1 with his seventh goal of the season 7:10 into the second period. Charlie Coyle then handed the Bruins the 2-1 lead with an impressive 5-on-3 goal right on the doorstep past Avalanche netminder Darcy Kuemper 12:16 into the period.
NHL・1 DAY AGO
NESN

Brad Marchand was the focal point of a lasting memory for a young Bruins fan Thursday when the Boston forward took the phone of Aiden Smith and recorded a selfie video on the 12-year-old’s phone that since has gone viral. Marchand, upon walking off the ice after pregame warmups,...
NHL・2 DAYS AGO
Sportsnaut

37-year-old center Jeff Carter came to the Pens in April, he’s made such an impression, he received a contract extension after 12 goals & 14 assists this year
NHL・1 DAY AGO

He said it initially it was a head-shot and after having time to watch it, Pens head coach Mike Sullivan questions why the league won’t punish the hit on Teddy Blueger
NHL・2 DAYS AGO
WGR550

The Buffalo Sabres and Senators are back at it again in Ottawa, just a week after a 3-1 win for the blue and gold also inside Canadian Tire Centre. Making their returns to the lineup for Buffalo are Casey Mittelstadt and Zemgus Girgensons.
NHL・2 DAYS AGO

Erik Haula has played well centering Taylor Hall and David Pastrnak so far, but the Boston Bruins could still be in the market for a second-line center upgrade before the trade deadline. Here are five potential targets.
NHL・1 DAY AGO
iheart.com

Ronnie & TKras w/ Zac Blobner This Morning: The Bucs have a lot on their plate to deal with, despite being out of the NFL Playoffs after losing to the Rams last Sunday. From Tom Brady on Instagram saying "Thank You", to OC Byron Leftwich unofficially heading to Jacksonville to coach the Jags, to Antonio Brown going on HBO and threatening to sue the team... it's, A LOT. Bucs Radio Voice Dave Moore & Pewter Report's Jon Ledyard help us break it all down, oh AND Saints HC Sean Payton stepping away from New Orleans in there too. Plus, the Bolts back home vs the Devils tomorrow, as Bally Sports Lightning TV Voice Dave Randorf calls the show w/ a bone to pick about Jon Cooper getting shafted by the NHL. Zac handles What's Up Tampa Bay w/ Wacky Turtle News & a game of Would You Rather on the MLB Hall of Fame ONLY inducting Red Sox Legend David Ortiz while shelving Barry Bonds' chances for the final time...
NFL・1 DAY AGO
WFAN Sports Radio

WATCH: Devils former first-round pick Mike McLeod was dropped to the ice by Dallas’ Luke Glendening in a lopsided fight at The Rock on Tuesday night.
NHL・1 DAY AGO
WFAN Sports Radio

With only eight games remaining between Thursday and the end of February, the Tampa Bay Lightning will look to get
NHL・1 DAY AGO
93.7 The Fan

It’s the worst team in the Western Conference & even though they’ve played better of late, can the Pens keep their focus tonight against Phil Kessel and mates
NHL・2 DAYS AGO
Sportsnaut

The Columbus Blue Jackets activated defenseman Adam Boqvist from the NHL’s COVID-19 protocol Wednesday. Boqvist, who has missed the past
NHL・1 DAY AGO