No proof yet from Sen. Amanda Chase showing Democrats were ‘cheating’ in 2021 election 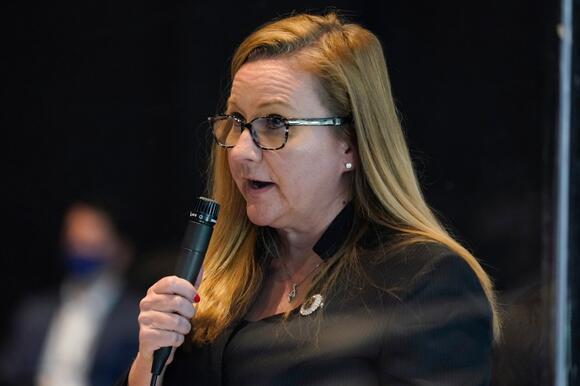 RICHMOND, Va. (WRIC) – Days before Virginia’s 2021 gubernatorial election, state Sen. Amanda Chase (R-Chesterfield) claimed she knew how Democrats were “cheating” and that the information had been shared with Glenn Youngkin’s campaign.

Attorney General Mark Herring asked Chase to hand over any evidence of election fraud she claimed to have with his office, saying in an Oct. 28 statement that she was required to provide it to the authorities “rather than secretively sharing” it with political allies.

In a text message on Nov. 4, Chase told 8News “the right people already have the information” and she would be releasing a full election report.

Now, a month after Youngkin’s victory, the report Chase said she would make public after the election has not been presented to the governor-elect, Virginia’s next attorney general, Jason Miyares or Herring’s office.

“As Attorney General Herring said when he first requested she [Chase] produce the evidence, she has an obligation to share any information she may have about illegal conduct with the authorities who can do something about it,” a spokeswoman for Herring, Charlotte Gomer, wrote in an email Wednesday.

Chase said Thursday that she has brought together a coalition of experts, including “data engineers and scientists,” to work on the election report but it won’t be ready until after Youngkin and Miyares are inaugurated next month.

“It’s pretty comprehensive. It’s very technical in nature,” Chase said of the report. “It’s a lot of information to digest.”

But Chase refused to provide specifics on whether the report has found any evidence of election fraud or cheating ahead of the Nov. 2 elections, saying that trying to prove fraud “is a really difficult feat.” She also declined to answer which member of Youngkin’s campaign she shared information with before the election and what exactly was provided.

While she said Youngkin did appear eager to listen to the alleged findings when they spoke after the election, Chase said she has not yet shared details with him or Miyares because they have been focusing on the ongoing transition process. Chase added she’s also busy with the transition, telling 8News Youngkin asked her to be part of his education transition team.

Spokespeople for Youngkin did not respond to 8News’ multiple requests for comment.

Chase did, however, say some of the findings were presented to the staff of Senate Minority Leader Tommy Norment (R-James City) during a meeting that lasted roughly 90 minutes.

“I can confirm that I received a briefing from Senator Chase’s office regarding election integrity,” a spokesman for Norment, Jeff Ryer, wrote in an email late Thursday. “However, that briefing occurred before the November 2 elections.”

Chase, who lost out on the GOP nomination for governor but eventually campaigned for Youngkin across the commonwealth, mentioned the “cheating” allegations against Democrats during an interview with John Fredericks on the conservative media outlet Real America’s Voice.

“I know how Democrats are cheating, and that information has been given to the Youngkin campaign,” she told Fredericks on Oct. 27.

“I’m already getting reports today that people are going to vote, and they have never done a mail-in ballot ever and yet when they went to cast their ballot, they were told that no we have already mailed you a mail-in ballot. And so we are already looking into that,” she added.

This potential scenario brought up by Chase, who has announced a congressional bid challenging Virginia Rep. Abigail Spanberger (D-7th), would not prevent a voter from using a provisional ballot at a polling location.

8News reached out to the state’s Department of Elections for an interview with Commissioner Christopher Piper but a spokeswoman for the department did not respond after acknowledging the request.

This story was updated with Mr. Ryer’s statement, which was sent to 8News after publication.

There’s a mental health crisis in Virginia emergency rooms — Will anything be done?

New data has shed light on an emerging crisis in Virginia Hospitals. The cost of an emergency room visit has risen dramatically since the start of the COVID-19 pandemic, even as the emergency room increasingly becomes a place of last resort for those struggling with serious mental illnesses.
VIRGINIA STATE・14 HOURS AGO
WRIC - ABC 8News

Not Guilty, Sentenced to Life: Attorney for ‘Waverly Two’ submits petition for clemency to White House

The attorney for Terrence Richardson and Ferrone Claiborne, two men sentenced to life in prison for the 1998 murder of a Waverly police officer despite being acquitted by a federal jury, filed a petition for commutation of sentence in the Supreme Court of Virginia.
WAVERLY, VA・2 DAYS AGO
WRIC - ABC 8News

Local leaders across Central Virginia and members of the state's congressional delegation are hoping that a $52.9 million investment in biotech will spur economic growth and lead to lower prescription drug prices.
VIRGINIA STATE・2 DAYS AGO
WRIC - ABC 8News

The FBI has joined Chesterfield County Police Department in seeking a suspect wanted for an armed bank robbery in North Chesterfield.
CHESTERFIELD COUNTY, VA・12 HOURS AGO

Federal prosecutors say they should be able to use evidence found during the search of the home where two men accused by Richmond police of plotting a mass shooting were living because "officers had a reasonable concern for their safety" to conduct a sweep.
RICHMOND, VA・2 DAYS AGO
WRIC - ABC 8News

Could the Henrico County Police Division be getting a brand new South Precinct in the near future? The department just received an unsolicited bid from a small veteran-owned business firm to build an expansive, state-of-the-art facility on Airport Drive.
HENRICO COUNTY, VA・15 HOURS AGO
WRIC - ABC 8News

The Richmond SPCA welcomed ten dogs from Puerto Rico on Thursday, Oct. 6. Through the organization Wings of Rescue, the dogs arrived in a group of about 100 animals that were rescued from the aftermath of Hurricane Fiona.
RICHMOND, VA・10 HOURS AGO

When he first moved to Chesterfield, Adam Guilbeaux said he had no trouble scaring coyotes away from his home. However, over the years, he's noticed that the wild animals are becoming increasingly comfortable encroaching on his property.
CHESTERFIELD, VA・1 DAY AGO
WRIC - ABC 8News

The white specks that can be found on some of the flowering trees are insects called bark scale. Peggy Singlemann, a horticulture consultant and the founder of RVA Gardeners, said bark scale feed on the sap out of the trees. This eventually weakens the trees and shortens their longevity.
RICHMOND, VA・1 DAY AGO
WRIC - ABC 8News

Enough is enough: Chesterfield residents speak out against new development

After a recent proposal for a new housing development near 288 and Hull Street Road, residents are expressing their concerns.
CHESTERFIELD COUNTY, VA・1 DAY AGO

A Caroline County man and one of his co-conspirators pleaded guilty to federal wire fraud charges, following an investigation into Walmart gift card schemes involving hundreds of fraud victims across the country.
RUTHER GLEN, VA・2 DAYS AGO
WRIC - ABC 8News

The enforcement will begin on Saturday, Oct 15, but there will be a two-week grace period during which violators will get a warning instead of a ticket. According to the city, the new rule is intended to make it easier for drivers to find street parking.
RICHMOND, VA・1 DAY AGO
WRIC - ABC 8News

According to TSA, the man was going through the security checkpoint at the airport on Monday, Oct. 3 when the bag triggered an alarm as it went through the x-ray machine. TSA officers found the gun and called police, who confiscated it and cited the man with a weapons violation.
RICHMOND, VA・1 DAY AGO
WRIC - ABC 8News

According to police, 51-year-old Sabrina Denise Bruce Simmons of the 1500 block of North 31st Street in Richmond was last seen by family on Saturday, Sept. 17. She is possibly driving a blue Ford Mustang with Virginia tags 82770H.
RICHMOND, VA・1 DAY AGO
WRIC - ABC 8News

The Fredericksburg Police Department is asking for help identifying and locating a pair they say shoplifted from a Kohl's in the Central Park area.
FREDERICKSBURG, VA・19 HOURS AGO