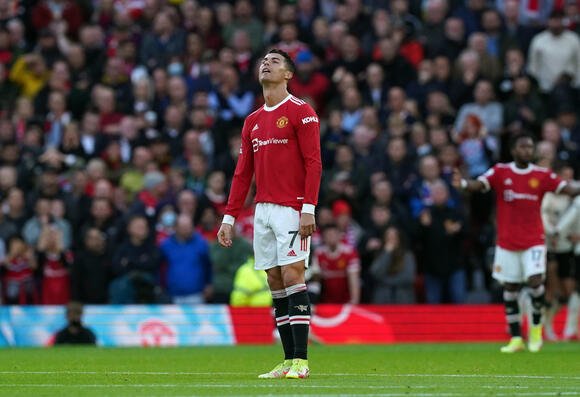 Cristiano Ronaldo has given Manchester United a 3-2 lead at Old Trafford against Arsenal from the penalty spot after a crazy challenge from Martin Odegaard and you can watch it here.

It was a well taken penalty driven straight down the middle.

A very similar goal to Ronaldo's as a cross from the right from Gabriel Martinelli was steered home by the Norwegian.

Manchester United have taken a 2-1 lead at Old Trafford against Arsenal through Cristiano Ronaldo and you can see the goal here.

It was a well made and well finished as Ronaldo swept home Marcus Rashford's cross.

Manchester United have equalised at Old Trafford against Arsenal through Portugal international Bruno Fernandes and you can watch the goal here.

United trailed through a bizarre goal scored by Emile Smith Rowe with David De Gea laying injured on the turf.

Fernandes' equaliser was a good goal created by Brazilian Fred on the left where he cut the ball back for the Portuguese to finish sharply past Aaron Ramsdale.

Arsenal have taken the lead with a bizarre goal from Emile Smith Rowe in the match with Manchester United at Old Trafford and you can watch the goal here.

A corner was swung in from the right and De Gea was caught by his own player, Brazilian Fred.

De Gea clearly in some discomfort was laying down facing away from the action when the ball found it's way to Smith Rowe outside the box.

As the midfielder volleys the ball towards goal with his left foot De Gea remains prone on the turf and the ball flies into the back of the net.

It looked like referee Martin Atkinson had blown to stop play but when the replay was slowed down, it was clear that he hadn't.

After a few minutes of confusion, the goal was eventually given after a VAR review and Arsenal are currently one goal to the good.

It is another example of where football never ceases to amaze as these bizarre incidents occur.

Manchester United's Cristiano Ronaldo was presented with a special award at the FIFA Best Awards held in Switzerland on Monday evening. The Portuguese superstar was handed the award by FIFA president Gianni Infantino for becoming the top International goalscorer of all time. The 36 year old has now scored a...
PREMIER LEAGUE・15 HOURS AGO
The Independent

What the papers sayDonny van de Beek has rejected his reported loan deal to Newcastle from Manchester United, according to the Telegraph. The 24-year-old midfielder had been in the sights of the Magpies as they battle against relegation, but the club’s unstable position was also said to be what caused Van de Beek to turn the deal down.Newcastle have struggled with other transfer prospects too but, according to the Daily Express, the club is optimistic a deal for Sevilla defender Diego Carlos can be closed this week. The 28-year-old Brazilian reportedly wants to move to the Premier League and seems...
PREMIER LEAGUE・1 DAY AGO
The Guardian

Aston Villa rescued a 2-2 draw in the Premier League against Manchester United after mistakes led to both of the visitors goals.It was an awful start from Villa. Bruno Fernandes took a soft free kick and took his time to strike. When he did, it was a deft touch and goalkeeper Emiliano Martínez looked to have caught it. But he dropped it through his legs to put United ahead.Mason Greenwood had a few chances and Villa threw all they had at United in the closing minutes of the first half but heading into the break the visitors were still 1-0...
PREMIER LEAGUE・2 DAYS AGO

Cristiano Ronaldo and Lionel Messi were both included in the men’s world XI team of the year alongside Erling Haaland and Robert Lewandowski – winner of the men’s individual prize – in a front four.Fifpro’s 2021 team crowbarred in the attacking quartet, with a back three of Manchester City’s Ruben Dias alongside Bayern Munich’s David Alaba and Euro 2020 winner Leonardo Bonucci. Dias’s City teammate Kevin De Bruyne was named in midfield alongside Jorginho and N’Golo Kante. Meanwhile Barcelona players were surprisingly omitted from the women’s team, despite Barca and Spain midfielder Alexia Putellas winning the women’s player of the...
FIFA・14 HOURS AGO
The Independent

Manchester United denied Birmingham City two wins on the bounce as they claimed a dominant 5-0 win in the Women’s Super League on Saturday. Birmingham came into the match off the back of a huge upset over league leaders Arsenal, but United made sure they didn’t have the same fate and came out firing.Marc Skinner’s side were 3-0 up after 20 minutes thanks to goals from captain Katie Zelem and Leah Galton, before the afternoon went from bad to worse for the visitors as Emily Ramsey hit in an own goal and Alessia Russo added a fifth with a strike...
SOCCER・2 DAYS AGO
goal.com

Scored by Bruno Fernandes. Scored by Bruno Fernandes. De Gea, Dalot, Lindelof, Varane, Alex Telles, Fred, Matic, Greenwood, Bruno Fernandes, Elanga, Cavani. For the match against Manchester, the home team will also have confirmed absences such as: Bertrand Traoré, Trezeguet, Marvelous Nakamba and John McGinn, the latter due to accumulation of cards and the others due to injury. Doubts for this match are Leon Bailey, Ashley Young and Philippe Coutinho.
PREMIER LEAGUE・2 DAYS AGO
The Independent

Aston Villa host Manchester United in the Premier League this afternoon. United left victorious when the two sides met just a few days ago in the FA Cup third round after Scott McTominay struck the game’s only goal inside eight minutes. Ralf Rangnick’s side still have plenty of ground to make up in the league, though, with the club six points adrift of the top four heading into the weekend as Cristiano Ronaldo publicly urged his teammates to improve their attitudes. Follow Aston Villa vs Manchester United LIVEVilla have been showing their own intent in the transfer window with the...
PREMIER LEAGUE・2 DAYS AGO
The Independent

Aston Villa welcome Manchester United to Villa Park in the Premier League this afternoon. The fixture comes just days after the two teams met in the third round of the FA Cup, with Ralf Rangnick’s side holding on to a 1-0 victory after Scott McTominay stuck early. After a tumultuous first half of the season, United entered the weekend six points adrift of the top four, although Rangnick’s side do also have two games in hand. Follow Aston Villa vs Manchester United LIVEMeanwhile, Aston Villa have made an early statement of intent in the transfer market after completing the signings...
PREMIER LEAGUE・2 DAYS AGO
ClutchPoints

A Cristiano Ronaldo-less Manchester United side fell short once again on Saturday after conceding two second-half goals to settle for a 2-2 draw with Aston Villa, who were inspired by brand-new signing Philippe Coutinho. The Red Devils quickly got on the scoresheet as Bruno Fernandes fired in a shot from...
PREMIER LEAGUE・2 DAYS AGO

Manchester United throw a 2-0 lead away agaisnt Steven Gerrard's Aston Villa and rival fans are loving it. LFCTR take a look at the reactions of rival fans, as former Liverpool player Philippe Coutinho is the man of the moment. Although Manchester United's ability to bottle matches is becoming the...
PREMIER LEAGUE・2 DAYS AGO
LFCTransferRoom

Manchester United’s reputation for winning penalties remains intact with a new study showing they benefit more often than any team in Europe’s ‘big five’ leagues.Across the current season and the previous three, the Red Devils have been given a penalty every 299 minutes – pipping Paris St Germain to top spot in England, France Spain, Germany and Italy and 10th in the 31 European leagues surveyed overall by the CIES Football Observatory.Here, the PA news agency looks at how the Old Trafford club compare to their Premier League rivals and the rest of the continent.It’s a fair KloppLiverpool manager...
PREMIER LEAGUE・18 HOURS AGO
LFCTransferRoom

Anthony Martial has hit back at claims from interim Manchester United manager Ralf Rangnick that he didn't want to be in the squad for his team's 2-2 draw against Aston Villa on Saturday. The Red Devils threw away a two goal lead given to them by Bruno Fernandes as Villa...
PREMIER LEAGUE・1 DAY AGO
The Guardian

The title race is over now, apparently. You know, the one that ended a few weeks ago. Manchester City already looked like being crowned champions for a fourth time in five years before this twelfth consecutive league win. After it, it seems a nailed-on certainty. There is a faint and remote possibility of a challenge from Liverpool, now 14 points back but with two games in hand. This was a meeting of the top two, though, and it only reinforced the theory that there is in fact only a top one.That was demonstrated not so much by the result, a...
PREMIER LEAGUE・2 DAYS AGO