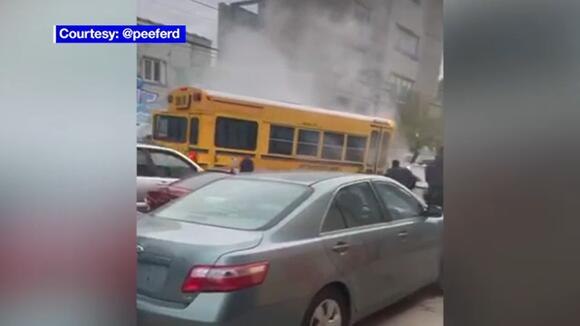 Police are investigating after they say a man stole an unoccupied school bus in East New York and struck 15-20 parked vehicles before he was stopped. The incident was reported Thursday afternoon around 3 p.m. when the man stole the bus at East 51st Street between Linden Blvd and Lenox Road. Authorities tracked the bus through multiple precincts, eventually taking the suspect into custody in Brownsville at Jamaica and Sheffield avenues. Anthony Reyes, 43, was later charged with grand larceny, reckless endangerment, unauthorized use of a vehicle, forgery, criminal possession of stolen property, obstruction of a governmental authority, resisting arrest, leaving the scene of an accident and fleeing an officer in a motor vehicle. Before he was stopped, Reyes struck multiple vehicles along the way as well as a building on East New York Avenue. One witness said he struck every single car on a block. "One of those cars that was right here, there was a lady inside, and if that cop did not take that lady out, she would've been dead by that time," witness Ali Sulimanalmaweri said. "So he pulled her out and he hit the car again, he kept hitting the car so he could run away." At first witnesses said they feared there were children on the bus, but fortunately that was not the case. However, countless vehicles were destroyed. One car was even rammed back and forth by the bus with a man inside. That man, Raymond Johnson, said he doesn't think he was hurt, but the adrenaline hasn't worn off yet. "He had me banging me back reverse trying to get away, and when he saw he could've pull over he kept pushing forward again," Johnson said. Police attempted to Taser Reyes but he was only struck with one prong. He was taken to an area hospital. One officer suffered a minor hand injury and three other people reported minor injuries. Police say Reyes has at least 12 prior arrests, including robbery. His last arrest for robbery was in 2017. He was released in March 2020 and is currently on parole until March 2025. The investigation is ongoing. ALSO READ | Cops explain how new DNA technology led to arrest in 1999 cold case

A 17-year-old was caught with a gun on a subway train in Times Square Wednesday afternoon.
MANHATTAN, NY・1 HOUR AGO
ABCNY

The 25-year-old gunman wrote his name in the sign-in book before the shooting.
BRONX, NY・11 HOURS AGO
ABCNY

A college student from the Bronx has been indicted for selling 73 weapons and high-capacity magazines to an undercover NYPD officer.
BRONX, NY・3 HOURS AGO

Two juveniles are facing charges for a fire that shut down part of the Garden State Parkway for several hours.
OCEAN COUNTY, NJ・2 HOURS AGO
ABCNY

A 13-year-old boy was charged with arson, reckless endangerment and criminal mischief for allegedly setting the fire that burned through an East Village card shop earlier this month.
PUBLIC SAFETY・1 DAY AGO

Police are searching for an NYU professor who has been missing for several days.
MANHATTAN, NY・1 HOUR AGO
ABCNY

A 35-year-old man was shot in the arm in the waiting room at Jacobi Hospital in the Bronx Tuesday.
NEW YORK CITY, NY・1 DAY AGO

A mother and her new son reunited Wednesday with a Suffolk County police officer who, with the help of a paramedic, helped deliver and save the baby born on Christmas Eve.
SUFFOLK COUNTY, NY・3 HOURS AGO
ABCNY

NYPD officer Wilbert Mora, who was shot and his partner killed while responding to a domestic call in Harlem, has died from his injuries, NYPD Commissioner Keechant Sewell announced Tuesday.
MANHATTAN, NY・1 DAY AGO

Police in Maplewood and Irvington are investigating a rash of at least nine armed robberies that all occurred on the same day.
MAPLEWOOD, NJ・2 DAYS AGO
ABCNY

They worked diligently to inform desperate families of their loved ones' fates, in the hopes that the confirmation of a parent's, sibling's or child's passing can somehow help start the grieving process.
BRONX, NY・5 HOURS AGO
ABCNY

The 27-year-old officer, a four-year veteran of the NYPD, suffered life-threatening injuries after being shot in the head Friday night in Harlem. His partner did not survive.
MANHATTAN, NY・1 DAY AGO