Blues have 'beer league' goalie on bench in tonight's game 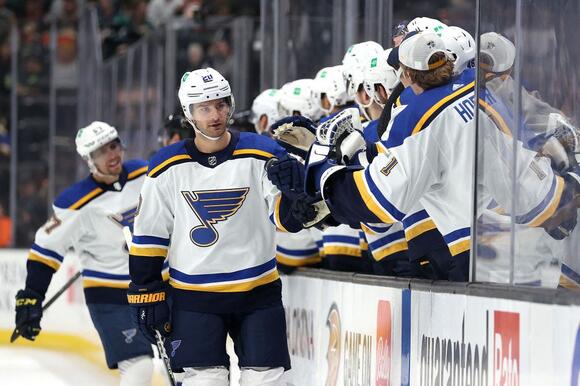 ST. LOUIS (KMOX) - The St. Louis Blues are really hoping they won't have to use their backup goalie in Thursday's game. But if needed, emergency backup goalie Kyle Konin will be dressed and ready to go.

Blues goaltender Jordan Binnington entered the NHL’s COVID-19 protocol Thursday after testing positive for the virus. It put the team in a difficult situation, because of salary-cap constraints, they can't call up another goalie for tonight's game in Tampa Bay.

League rules stipulate that because the Blues don’t have the cap room to add another player to the roster, they have to get through one game with an emergency backup.

Konin, 23, will be backing up Ville Husso. He played two seasons of junior hockey for the New Hampshire Avalanche and the Vermont Lumberjacks of the Eastern Hockey League. Most recently, he played club hockey at Grand Valley State University and now works as a mask painter. He also apparently plays rec-league hockey still.

“He had a morning skate today with his beer league guys and he said he was on fire and ready to go, so we’re excited to have him in here,” Blues General manager Doug Armstrong said Thursday afternoon. “Knock on wood that he’ll remain a 60-minute cheerleader.”

Binnington, who backstopped the Blues to their first Stanley Cup title in 2019, is 8-5-3 with a 2.80 goals-against average and .912 save percentage in 16 starts this season. The 28-year-old is also a leading candidate to be one of Canada’s goalies at the upcoming Olympics in Beijing, assuming the NHL does not withdraw.

Husso is expected to get the lion’s share of duties in net while Binnington is out. The 26-year-old Finn is 3-1-0 with a 1.76 GAA and .936 save percentage in limited action this season.

“I believe he’s in a better place,” head coach Craig Berube said. “It’s obviously new for him to handle the load. But I’m going off his play this year so far and he’s played extremely well.”

The NHL season officially started back on October 12. In this article, we track all the NHL games today as
NFL・23 HOURS AGO
San Diego Union-Tribune

Josh Norris scored twice, including the tiebreaking goal as the Ottawa Senators tallied five times in the third period to rally past the Edmonton Oilers 6-4
NHL・2 DAYS AGO
Sportsnaut

For a team that has won five of its past seven games, with the only losses coming to a couple elite teams, Pittsburgh and Toronto, and is 10-3-1 since Dec. 7 despite having a revolving door of players passing through the lineup, the Blues’ 6-5 loss to the Maple Leafs on Saturday brought no small amount of recriminations.
NHL・19 HOURS AGO
Sportsnaut

After the first 20 minutes, it seemed as if the Vegas Golden Knights were going to coast to victory in
NHL・4 HOURS AGO
St. Louis Post-Dispatch

Hochman: 'Huuuuus!' Backup goalie Ville Husso makes a name for himself in Blues' win against Nashville

Blues backup goalie Ville Husso continues to make St. Louis his town — and the goal crease his, too. This is not to knock Jordan Binnington. He still is equipped to win at a high level, and he’s still the team's No. 1 goalie. But Husso has to play more. And here’s thinking he will.
NHL・8 HOURS AGO

The National Hockey League turned 104 back on November 26th, and on Thursday, a new record was set for the most goaltenders to ever appear in a regular season with 100. The previous record was set during the 2020-21 season when 98 goalies played at least one game. When Tuukka...
NHL・2 DAYS AGO
San Diego Union-Tribune

The Buffalo Sabres were no match for the Red Wings on Saturday night at Little Caesars Arena, as Detroit defended their home ice to the tune of a 4-0 shutout win. Kyle Powell has a complete game recap:
NHL・2 DAYS AGO
Sportsnaut

While their struggles on the road continue, the Dallas Stars will try to maintain their dominance on home ice when
NHL・9 HOURS AGO
Sportsnaut

In their latest game, the Vancouver Canucks received a jolt from both Elias Pettersson and their sputtering power play in
NHL・4 HOURS AGO
NewsOne

The jersey retirement ceremony will take place on the anniversary of his NHL debut.
NHL・1 DAY AGO
Mavs Moneyball

Mavericks Odds: How to bet tonight’s game against the OKC Thunder

The game against the Orlando Magic was uncomfortably close for most of the game. The actual result never was but Dallas’s lead hovered between 10 and 12 points for most of the game. If you, like I, had the Mavericks, the game had a ton of intrigue considering it wasn’t an aesthetically pleasing game. Thankfully, a 4th quarter push blew the game open and those of us that struggle to stay up late were able to go to bed at a reasonable time. Tonight, however, they have a much livelier opponent in the OKC Thunder.
NBA・18 HOURS AGO