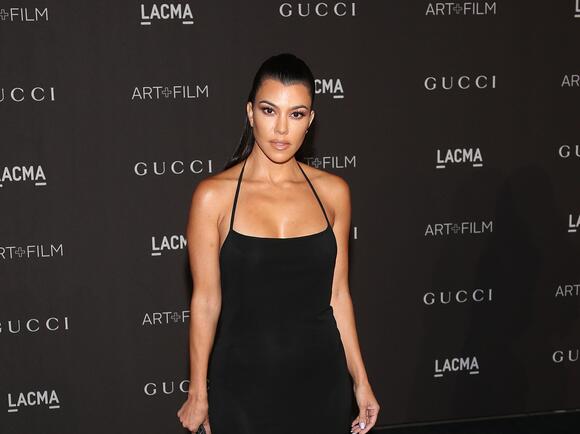 Kourtney Kardashian is facing mom-shaming from TikTok users who are criticising her for allowing her nine-year-old daughter to wear fake nails .

The criticism arose after the Keeping Up With The Kardashians star and her daughter Penelope Disick, nine, recently created a joint TikTok account together, where they post videos under the username @ pandkourt .

In a recent video , uploaded on Wednesday, the nine year old can be seen pouring herself a drink from a can before taking a sip, while the TikTok ends with Kardashian taking a sip from the same can.

While many TikTok users were excited by Penelope’s increasing usage of the app, others found issue with her nails, as the Poosh founder’s daughter appears to have fake almond-shaped nails on in the video.

In the comments under the clip, which has been viewed more than 1.3m times, some viewers questioned why Kardashian allowed her daughter to have the nails applied, with one person commenting: “That child has acrylics.”

“She’s a kid. Imagine the bag of problems this poor girl is going to have… Protect her and let her be a kid,” another person wrote, while someone else commented: “She’s like six and she has nails.”

However, in response to the criticism, many viewers took the opportunity to defend the nine-year-old’s nails, and Kardashian’s parenting.

“My daughter would love it when I would take her to the salon and let her get her nails done along with her hair. That’s being a good mom,” one fan claimed, while another person added: “Her nails are so cute, I would have died for that at her age.”

This is not the first time that Penelope has shown off her lengthy nails on the mother-daughter duo’s TikTok account, as she previously posted a video to the platform in which she’d shown off the colourful nail designs she’d had applied to each finger.

While some of the comments were critical, most of the responses were positive, with one viewer joking that they would be taking the video to their own nail salon as inspiration.

As of now, Kardashian has not addressed the comments, however, she recently defended herself from mom-shaming after a social media troll suggested that she doesn’t spend enough time with her three children, who she shares with ex Scott Disick.

Since posting their first video in October, the reality star and her daughter have accumulated more than 2.3m followers on the TikTok.

These people would rather be friends with there children than a parent. Next they’ll get “ mommy make overs “ together

Scott Disick has hashed out a deal with a paparazzi agency who slapped him with a federal lawsuit to avoid a costly court trial. According to court documents obtained by Radar, the 38-year-old one-time reality star has informed the court of a settlement with a popular Hollywood-based photo company. Article...
CELEBRITIES・8 DAYS AGO
Hypebae

Kourtney Kardashian Is Rumored To Be Pregnant

Kourtney Kardashian and fiancé Travis Barker are rumored to be expecting a baby. The reality TV star and Blink-182 drummer are madly in love, with the rockstar proposing to the eldest Kardashian on a beach surrounded by roses. Fans have been speculating and grasping at the social media breadcrumbs...
CELEBRITIES・11 DAYS AGO
HollywoodLife

Megan Fox and Machine Gun Kelly were showered with love on social media after their engagement, including comments from Kim and Kourtney Kardashian!. The supportive messages came rolling in for Megan Fox and Machine Gun Kelly after they announced their engagement on Jan. 12. Megan posted a video of MGK’s proposal on her Instagram page, and it received thousands of likes and comments. “So happy for u guys!!!!” Kim Kardashian wrote, along with an engagement ring emoji, red heart emoji and heart eye emojis. Kourtney Kardashian also showed Megan some love by commenting with five red heart emojis. Meanwhile, Kourtney’s fiance, Travis Barker, commented on MGK’s post, “F*** YESSSSS,” along with a black heart.
CELEBRITIES・10 DAYS AGO
ETOnline.com

Love is in the air as we enter Valentine's Day season, and celebs are already putting a ring on the finger! Megan Fox and Machine Gun Kelly are the latest celebs to get engaged. The musician shared a close-up of the stunning two-stone engagement ring he gave to the actress.
CELEBRITIES・9 DAYS AGO

Kourtney Kardashian is the ✨ main character ✨. Seriously, we’re so here for the chic rock chick vibe she channels in every one of her Instagram posts nowadays. And we cannot WAIT to see how she translates that into her upcoming wedding to Travis Barker. To match...
CELEBRITIES・6 DAYS AGO
HipHopDX.com

Kanye West may have gotten a few laughs from the general public with his verse on The Game’s “Eazy” but on Saturday (January 15), the mogul/rapper temporarily found himself an outlier at his own daughter Chicago’s fourth birthday party. The drama began when Kanye wished his...
CELEBRITIES・7 DAYS AGO
Radar Online.com

Khloé Kardashian can't catch a break. After years of selling her clothes for profit on Kardashian Kloset, trolls are taking offense after she added her daughter True's wardrobe to the lot. Article continues below advertisement. The clothing resell site got extra clicks when Khloé announced her four-year-old daughter's staples...
RETAIL・2 DAYS AGO
Elle

Kourtney Kardashian Launches New Charity 'This Is About Humanity'

Kourtney Kardashian often lets us in on her family life. After all, the mother-of-three knows all to well what it means to have a close-knit unit given she's the eldest sibling of the Kardashian family. In keeping with her strong family values, the 42-year-old is now using her fame and...
CHARITIES・12 DAYS AGO

Red to Green to Rainbow! See Kourtney Kardashian’s Best Manicures Over the Years

Kourtney Kardashian is known for her fun and confident personality and it shows in her edgy and bold style — including through the manicures she gets every now and then. Whether it be a rainbow set of nails or a simple sleek black manicure, the former Keeping Up With the Kardashians star doesn’t hesitate to push the boundaries when it comes to new looks.
BEAUTY & FASHION・10 DAYS AGO
CinemaBlend

On the one hand, it could be said that 2021 was a year of booty-grabbing PDA pics – for Kourtney Kardashian and Travis Barker, that is. It was also a year of widely speculated engagement rumors about the couple. That eyebrow-raising Vegas trip? Barker's cryptic allusions to popping the question? He finally did propose in October (she said yes) but, now, he and Kardashian are shifting their focus to the wedding itself. Last we heard, it might be a destination wedding. New reports, however, suggest something else.
RELATIONSHIPS・7 DAYS AGO
HollywoodLife

Sources close to the KarJenner clan are EXCLUSIVELY sharing with HL the details of Kourtney Kardashian’s upcoming nuptials!. Now that Kourtney Kardashian, 42, and Travis Barker, 45, are gearing up to walk down the aisle, Kourt is beginning to think of how she wants the big day to play out. According to a few KarJenner sources, the Poosh founder is ready to rely on mom Kris Jenner and sisters Khloe Kardashian and Kim Kardashian for a little advice!
CELEBRITIES・10 DAYS AGO
Popculture

Khloe Kardashian is facing fresh criticism, this time for selling her daughter True Thompson's used clothes for eye-popping prices. The clothes were listed on Kardashian Kloset, a website the Kardashian-Jenner family launched to sell some of their luxury designer clothes. One of the most expensive items fans noticed was an Aristocrat Kids dress with a $556 price tag, reduced from $695.
CELEBRITIES・2 DAYS AGO

It's safe to say that we're living in a very strange era of celebrity couples. Perhaps due to our obsession with social media, there is rarely a day that goes by where we don't hear of an absurd quote or see an eye-brow raising Instagram post from the most talked about celebrity couples in 2022.
BEAUTY & FASHION・1 DAY AGO
E! News

We independently selected these deals and products because we love them, and we think you might like them at these prices. E! has affiliate relationships, so we may get a commission if you purchase something through our links. Items are sold by the retailer, not E!. Prices are accurate as of publish time.
BEHIND VIRAL VIDEOS・4 DAYS AGO
Business Times

Kourtney Kardashian is set to get married to Travis Barker and as early as now, there are rumors they are already expecting their first child. There are theories the "Keeping Up with the Kardashians" alum has been dropping hints about her pregnancy on Instagram, so is there really a bun in the oven?
CELEBRITIES・12 DAYS AGO
StyleCaster

There are sooo many sculpting face tools out there that it can be daunting to make a decision on which one to try out. There are those odd-looking ice globes, vibrating face massagers, blue light pens and the list goes on. Sometimes, simple is better. Gua shas are nothing new to the beauty scene and go through waves of popularity, but I found one I plan to keep on-hand through thick and thin. Sacheu Beauty’s Stainless Steel Gua Sha, first and foremost, has Kourtney Kardashian’s stamp of approval, which is a huge deal. Whenever a Kardashian or Jenner mentions a product...
CELEBRITIES・12 DAYS AGO
HOLAUSA

Tristan Thomson is reflecting. The serial cheater took to his Instagram stories where he opened up about “weakness” and hiding from “your demons. “Sometimes you don‘t realize your own strength until you face your greatest weakness,” the 30-year-old wrote. “Hide from your demons and they’ll slowly destroy your potential. Face them and they can potentially become your greatest asset,” he continued.
CELEBRITIES・1 DAY AGO
iHeartRadio

Tristan Thompson recently confirmed he fathered a child with another woman while in a relationship with Khloe Kardashian.
CELEBRITIES・2 DAYS AGO