Here’s How Ford, Tesla and These Other Major Car Brands Fared During a Very Tumultuous Year 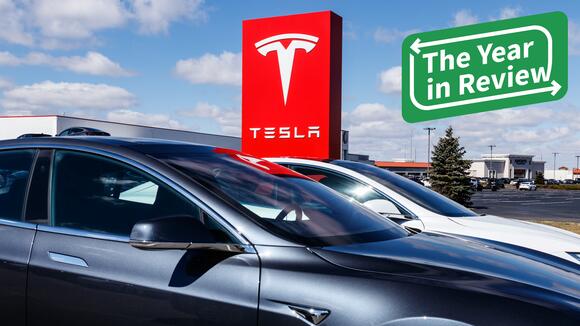 Throughout 2021, an industry-wide chip shortage forced automakers to ration their short supplies of these critical components in favor of their best-selling and most profitable vehicles. Despite their efforts, according to Forbes, U.S. auto sales fell hard in the third quarter — and not from lack of demand.

As the chip shortage slowed production of some makes and models to a crawl, and rising inflation sent the price of vehicles skyward, frustrated buyers had to make difficult compromises. Some had to switch from new to used, move down to lower trims, settle for less desirable models or colors, or simply pay more.

All of that has taken an axe to brand loyalty and put countless new customers up for grabs. Here’s how some of the top automakers fared in this most unusual year.

Find Out: 30 Biggest Do’s and Don’ts When Buying a Car
Read: 25 Tips and Tricks for Buying a Car Online

When chip supplies got really tight, automakers steered the lion’s share to their top performers. In most cases, that meant large SUVs and full-size trucks, like America’s best-selling vehicle for more than 40-years, the Ford F-150.

The Ford F-Series is still No. 1, according to Forbes, but its lead dwindled by 8.4% on the year as the Ram Pickup and Chevy Silverado gained ground.

All the drama made for an exciting race that was neck-and-neck all year.

The Ram 1500 and Silverado actually outsold the F-Series in Q2, according to Kelley Blue Book (KBB), but the king regained its crown in the third quarter. The trio is battling not only for quarterly sales, but for the future. The long-awaited and highly impressive fully electric F-150 Lightning debuts in 2022. It will be followed closely by an EV Ram 1500 and an electric Silverado.

Despite a 6.2% drop in sales over last year, Ford holds a market share of 11.2% and sold more vehicles in 2020 than every automaker except Toyota. Its Q3 results were strong enough for the company to revise its full-year guidance upward and year-to-date, Ford stock is up an extraordinary 130%.

Remember: 20 Questions You Should Always Ask the Dealer

Unlike Ford, however, Honda shareholders were not rewarded — the company’s stock is just shy of breaking even on the year. Shares peaked above $33 in mid-August but had fallen sharply by the end of the month — and the slide continues today.

Japan’s No. 2 automaker, Honda was hit hard by the chip shortage, not to mention soaring production costs thanks to the rising price of steel and other critical materials. It was forced to cut its profit outlook twice between August and early November, according to Reuters, with its most recent revision scaling back estimates by 15%.

See: 23 Car Upgrades That Are Worth the Price

Toyota stock is up more than 16% year to date, adding about $25 per share since January 1. The company showed incredible resilience amid the pandemic right out of the gate in 2021. Its first-quarter results wowed investors with a 73% increase in sales for a profit of $8.2 billion.

Don’t Miss: 25 Freebies You Should Ask For When Buying a New Car

In a lot of ways, 2021 was the year of Tesla. The company’s stock is up 50% year to date, with the price of a single share breaking the $1,000 mark in the days leading up to Halloween. In the closing days of 2020, Tesla’s $631 billion market cap meant the company was worth more than the next six most valuable automakers combined, according to TheDrive. In October 2021, Fortune reported that Tesla had breached $1 trillion in market cap, representing growth of more than 40% since January.

Tesla sold 62% more cars in 2021 than it did in 2020. Only a few luxury brands like Bentley and Genesis had higher percentage increases, according to Forbes, which reports that Tesla “outsells virtually every premium brand, including Audi, Acura, Cadillac, Volvo, Lincoln, Land Rover, Porsche, Infiniti, Alfa Romeo, Jaguar and eight other premiums with sales under 1,000 a month.”

In fact, the only three premiums that outsold Elon Musk and Co. were Lexus, Mercedes-Benz, and BMW, by not by much — and seemingly, not for long.

This article originally appeared on GOBankingRates.com : Here’s How Ford, Tesla and These Other Major Car Brands Fared During a Very Tumultuous Year

Elon Musk, whose Tesla company reported fourth-quarter earnings beating expectations on Thursday, Jan. 26, said that the humanoid robot the company is developing will be the most important product...
ECONOMY・16 HOURS AGO
GOBankingRates

We can all use a simpler, more efficient way to manage expenses and save money. Putting your bills on autopay can ensure never forgetting a due date, which minimizes the risk of late fees and...
CREDITS & LOANS・15 HOURS AGO
GOBankingRates

Earning extra money on the side can be easy when you know what types of opportunities to look for. Whether you want to pay off student loan debt, start saving for a big-ticket purchase or build up a fund for the future, finding one of the best side jobs out there is a great way to reach your goal.
JOBS・7 HOURS AGO
NBC Chicago

The "Tesla Bot" is the "most important product" that Tesla is developing this year, CEO Elon Musk said Wednesday on a fourth-quarter earnings call, putting it ahead of the Cybertruck and other vehicles, including the Semi and the Roadster. The robot, code-named Optimus, "has the potential to be more significant...
CARS・15 HOURS AGO

Both EV stocks are up over the last year but have slipped in recent weeks along with the broader market.
ECONOMY・1 DAY AGO
fox5ny.com

These three EV stocks all show long-term promise, but which one looks best as a near-term investment?
ECONOMY・1 DAY AGO
MotorTrend Magazine

Here's How Much the 2022 Ford Bronco Raptor Will Cost

Now that we know the mechanical specifications of the 2022 Ford Bronco Raptor, details about its twin-turbo V-6, and how its suspension is upgraded, what about its price? If you figured "somewhere close to the 470-hp Jeep Wrangler Rubicon 392," pat yourself on the back—the Bronco Raptor starts at $69,995, a few thousand bucks shy of the V-8-powered Jeep. Now, let's see how it stacks up with that SUV and its other competitors. For fun, we'll also include the Bronco's bigger brother, the F-150 Raptor, just to get a sense of how the two Blue Oval-built, high-speed off-roaders compare. Especially since both utilize high-output, turbocharged V-6 engines under their hoods and Ford says the Bronco can do everything the F-150 can.
BUYING CARS・2 DAYS AGO

Tesla’s Factory Makes More Cars Than Any Other American Plant

There’s a funny irony that a factory basically given up on by Toyota and GM is now out-performing them. All that and more in The Morning Shift for January 24, 2022. 1st Gear: More Cars Per Week In 2021 Than Toyota, BMW, Or Ford. This comes from new analysis...
CARS・3 DAYS AGO
just-auto.com

Ford is growing sales in China on the back of more electrified models and a particularly strong performance from its premium Lincoln brand in 2021. Ford says it has laid the groundwork for its electrification push in China with the inauguration of its first 25 direct-to-customer battery electric vehicle stores. In addition, local production of Mustang Mach-E began in October with the first customers taking delivery in December.
ECONOMY・13 DAYS AGO
The Motley Fool

It's the Fed, but it's not just the Fed.
ECONOMY・2 DAYS AGO
WXYZ Detroit - 7 Action News

The Detroit automaker is looking for software, computer, mechanical and electrical engineers, as well as battery engineers, cyber security experts and others. The automaker plans to fill them during a hiring spree this year.
DETROIT, MI・1 DAY AGO
AFP

VW and Bosch join forces to rev up automated driving

Car giant Volkswagen and parts supplier Bosch have embarked on an "extensive partnership" to bring automated driving to the mass market by next year, the German companies said on Tuesday. Bosch and VW software subsidiary Cariad are aiming to "make functions available that will allow drivers to temporarily take their hands off the steering wheel" in vehicles sold under the Volkswagen Group brand, according to a statement. These will range from so-called "hands-free" systems for urban and motorway driving to a system that takes over all driving functions on the motorway, the companies said. The first of these functions are to be installed in 2023.
BUSINESS・2 DAYS AGO
Robb Report

Lamborghini Will Not Make Pure Gas-Powered Cars After This Year

The Raging Bull is waving the checkered flag on combustion engines. If you missed out on grabbing one of Lamborghini’s last pure gas-powered V-12s last year, chances are it won’t get any easier in the future. The Italian marque is set to make the complete switch to plug-in hybrid models after 2022, as part of its nearly $2 billion investment in electrification. “It will be the last time that we only offer combustion engines,” president and CEO Stephan Winkelmann said in an interview with Bloomberg. Lamborghini’s “Cor Tauri” blueprint for an electrified future was first announced last May when Winkelmann said the automaker...
CARS・2 DAYS AGO
GOBankingRates

Costco is known as a low-price leader, but as the big-box and warehouse store landscape becomes more and more competitive, it's getting harder to find unbeatable deals. Despite this, Costco still has...
RETAIL・15 HOURS AGO
GOBankingRates

Avoid Buying These 25 Grocery Items That Are Now More Expensive

If inflation was once just a concept you vaguely remember reading about in economics class, chances are you're now very familiar with it -- in your wallet. As a result of the pandemic and other...
LIFESTYLE・17 HOURS AGO
GOBankingRates

California's Supplemental Nutrition Assistance Program, SNAP, known as CalFresh, is the largest food program in California and is federally mandated and state-supervised and country-operated. The...
CALIFORNIA STATE・13 HOURS AGO
GOBankingRates

Social Security Schedule: When the First COLA Checks Will Arrive in January 2022

The Social Security Administration has released the schedule of Social Security payments for 2022. These payments will include the cost-of-living adjustment.
PERSONAL FINANCE・16 HOURS AGO
GOBankingRates

With housing prices on the rise, it might seem like a tall order to find a place to live that has both affordable housing and good weather -- but such places do exist. PropertyShark analyzed U.S....
REAL ESTATE・1 DAY AGO