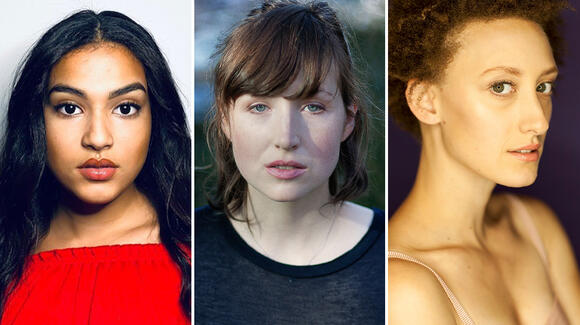 The hourlong drama series, which is currently in production, centers on a self-help guru and sect leader who develops a complicated relationship with a rising pop idol. Gonzales will be a regular in the cast, while the five announced additions will be recurring stars on the show.

“The Idol” is executive produced and written by The Weeknd, Fahim and Levinson, as well as Joe Epstein. Also executive producing are Kevin Turen, Aaron Gilbert for BRON, Ashley Levinson, Nick Hall, Sara E. White and Amy Seimetz, who directs. The project is from A24.

Jeff Garlin’s sudden depature from “The Goldbergs” over multiple misconduct allegations — which resulted last week in a mutual agreement to leave the Sony Pictures Television-produced ABC sitcom — has left the show in an unusual bind. How should Garlin’s character, Murray Goldberg, be dealt with on the show, given that Season 9 of “The Goldbergs” is in full swing and his sudden disappearance would be noticeable? While there could be a number of options for the creative team to address the situation, Variety has learned that the plan for now is that Garlin will indeed appear in the rest of...
TV SERIES・26 DAYS AGO
Variety

The Amazon Prime Video competition series “LOL: Last One Laughing” will launch a Canadian edition Feb. 18. “Last One Laughing Canada” competitors include Caroline Rhea, Dave Foley, Debra DiGiovanni, Jon Lajoie, Tom Green, Colin Mochrie, Mae Martin, Brandon Ash Mohammed, Andrew Phung and K. Trevor Wilson. Hosted by Jay Baruchel, the six-part series follows the 10 comedians as they try to eliminate others by making each other laugh (through stand-up, musical performance, improvisational and more), while not laughing themselves. The comedian who outlasts their competitors wins the grand prize of $100,000 for their charity of choice. Executive Producers are John Brunton, Erin...
TV SERIES・2 DAYS AGO
Variety

SPOILER ALERT: This piece contains major spoilers for the first three episodes of “Peacemaker,” which premiered January 13 on HBO Max. Even after re-watching James Gunn’s “The Suicide Squad” in anticipation of “Peacemaker,” it was hard to see why Peacemaker, of all the movie’s antiheroes, merited a series of his own beyond the fact that he was played by John Cena. In a story that otherwise leans on agents of chaos like Margot Robbie’s Harley Quinn, Daniela Melchior’s endearing Ratcatcher 2, and conflicted journeymen like Idris Elba’s Bloodsport or Joel Kinnaman’s Rick Flag, Cena’s stickler of a killer was far from...
TV SERIES・3 DAYS AGO
The Hollywood Reporter

Life Goes On is inching a step further toward a return to primetime. NBC has handed out a put-pilot commitment to a sequel to the former ABC drama, with original star Kellie Martin attached to reprise her role. The potential series hails from writer/exec producer Nkechi Okoro Carroll and is set up at Warner Bros. Television, where the All American showrunner is based with a rich overall deal. Described as a sequel to the four-season drama that ran from 1989 to 1993, Martin will reprise her role as Becca Thatcher, who is now an accomplished doctor, and her extended family as she...
TV SERIES・4 DAYS AGO

Iain Armitage does not need to rely on Young Sheldon to boost his fortune. The 13-year-old actor, who shot to fame on HBO's Big Little Lies, is the voice of Chase, the main character in PAW Patrol: The Movie, one of the biggest animated hits of 2021. Armitage's contract for the film reportedly guaranteed at least a $100,000 paycheck.
MOVIES・13 DAYS AGO
Popculture

Sandra Bullock scored another Netflix hit with The Unforgiveable, three years after the surprising success of Bird Box. The success of The Unforgiveable surprisingly did not revive interest in Bird Box though. Instead, another of Bullock's movies on Netflix, Premonition, reached the ninth spot on Netflix's Top 10 Movies in the U.S. chart this week.
MOVIES・17 DAYS AGO
Deadline

Keanu Reeves In Talks To Star In Hulu’s Series Adaptation Of ‘The Devil In The White City’ From Martin Scorsese, Leonardo DiCaprio, Todd Field & Sam Shaw

EXCLUSIVE: Keanu Reeves is in talks to head to the World’s Fair in 1893. Deadline understands that The Matrix star is in negotiations to star in Hulu’s series adaptation of The Devil In The White City, the big-budget take on Erik Larson’s 2003 book. The Devil in the White City tells the true story of two men, an architect and a serial killer, whose fates were forever linked by The Chicago World’s Fair of 1893. It follows Daniel H. Burnham, a brilliant and fastidious architect racing to make his mark on the world and Henry H. Holmes, a handsome and cunning doctor who...
TV & VIDEOS・12 DAYS AGO

When discussing the fortunes of HBO (or HBO Max) in 2022, one series inevitably comes up. Yes, “House of the Dragon” — the network’s first follow-up to juggernaut fantasy series “Game of Thrones” — is debuting this year, and yes, its performance (in the ratings, on streaming, in the culture) will be studied by far more than just the executives paid to make sure the profitable franchise succeeds. But HBO has never tied its sterling reputation to a single series. After “The Sopranos” and “Sex and the City” came “True Blood” and “Boardwalk Empire,” “Girls” and “Veep,” “Band of Brothers” and...
TV SERIES・10 DAYS AGO
The Hollywood Reporter

Alison Brie is set to star opposite John Cena in Freelance, an action-comedy directed by Taken helmer Pierre Morel. AGC Studios, run by Stuart Ford, is behind the project, which has Steve Richards of Endurance Media, Sentient’s Renee Tab and Christopher Tuffin producing. The script by Jacob Lentz centers on an ex-special forces operator who, desperate to escape his humdrum life, takes a job providing security for a journalist who is hoping to salvage her career by interviewing a dictator. Things go sideways when a military coup breaks out in the middle of the interview, and the mismatched duo, along with the...
MOVIES・1 DAY AGO
ComicBook

The cast of Disney's National Treasure TV series is growing significantly as the start of production approaches. A new era of National Treasure is heading to Disney+ in the near future, with the popular film franchise being given the TV treatment, along with a new story for another generation. With the series set to begin filming early this year, Disney is finally putting the core cast together, finding the folks that will surround star Lisette Alexis.
TV & VIDEOS・3 DAYS AGO
Deadline

EXCLUSIVE: Actor and filmmaker Mark O’Brien is set to star in season 2 of HBO’s Perry Mason in the recurring guest star role of Thomas Milligan. Thomas is Los Angeles’ ambitious Deputy District Attorney. He’s described as an aggressive attack dog in court as he strives to make his mark and ascend to greater heights, no matter whose blood he has to spill to get there. Season 2 will be eight episodes long with Matthew Rhys returning to the title role in the Emmy-nominated series. Season 2 of Perry Mason takes place months after the end of the Dodson trial. Perry (Rhys) has moved off the...
TV SERIES・2 DAYS AGO

Who Stars In 'Naomi'? Meet The Cast of The CW's New Series Here!

Naomi is premiering TONIGHT (January 11) on The CW, and we’re taking a look at who stars in the new show!. The new DC Comics series follows Naomi McDuffie, who is living her best life as a top student, skateboarder and Superman-stan, when a “stunt” in the middle of her hometown of Port Oswego turns her world upside down.
TV SERIES・4 DAYS AGO
flickeringmyth.com

HBO Max has released another featurette for the new DC series Peacemaker which sees John Cena giving viewers some background on his titular character and what’s ahead for Christopher Smith following the events of James Gunn’s The Suicide Squad; check it out here…. Peacemaker sees John Cena reprising...
TV SERIES・9 DAYS AGO
IGN

Batgirl: Every Cast Member So Far for the HBO Max Movie

Filmgoers will recognize Leslie Grace as Nina Rosario, star of Jon M. Chu and Lin Manuel Miranda's In the Heights. Prior to In the Heights, her career largely focused on songwriting and music video performance, earning her three Latin Grammy Award nominations. You can watch her perform in music videos like Bachatica, Will You Still Love Me Tomorrow, and Duro y Suave. Image credit: Lesliegrace.net.
MOVIES・1 DAY AGO
TheDailyBeast

The devil works hard, but HBO’s casting department works harder. Aubrey Plaza is set to star in the sophomore outing of The White Lotus, HBO’s hit series about tourists in Hawaii and the resort employees tasked with dealing with them. Plaza’s casting was announced by HBO on Monday,...
TV SERIES・5 DAYS AGO
COMICBOOKMOVIE.com

Batgirl is currently shooting in Glasgow, Scotland, and several photos from the set have found their way online over the past few days. Most were fairly unrevealing, but we did get a look at a mural featuring Batman and Robin, which could suggest that a version of the Boy Wonder will soon make his DCEU debut.
MOVIES・3 DAYS AGO
Variety

Although Bridget Everett has a number of impressive screen credits on her résumé — from films “Trainwreck” and “Patti Cake$” to such television shows as “Inside Amy Schumer,” “Lady Dynamite” and “Unbelievable” — she is also known for work on stage. Touring with her band, The Tender Moments, and starring in several comedy cabaret shows has allowed her to show off her musical talents, and now she is getting the chance to do that on a larger scale with “Somebody Somewhere.” In the HBO series launching Jan. 16 at 10:30 p.m., her character, Sam, finds new purpose in a community...
TV & VIDEOS・2 DAYS AGO
GeekTyrant

Domhnall Gleeson (About Time, Ex Machina, Star Wars: The Rise of Skywalker) is among the actors who have joined the cast of the limited thriller series titled The Patient at FX. Gleeson is joined by Linda Emond (The Big Sick), Laura Niemi (This is Us), and Andrew Leeds (A Million Little Things) have also joined the show’s cast. They join Steve Carell (The Office, The Morning Show), who will star in the series.
MOVIES・1 DAY AGO
Newsweek