Fraudster, 55, who died after swallowing ACID when he appeared in court to be sentenced was allowed to bring flask into dock by custody officer, inquest hears

A serial fraudster who swallowed acid after being sentenced in court had been allowed to bring his flask into the dock.

Mark Marshall, 55, was being sentenced in Inner London Crown Court on April 29, 2019 for purchasing £77,000 worth of photography equipment with fake cheques and selling it to cash converters.

Shortly after he received a two and a half year prison sentence, he downed the corrosive substance.

He died in hospital two months later from his injuries.

A post-mortem investigation ruled that Marshall had died from multiple organ failure and damage to his oesophagus due to acid ingestion. 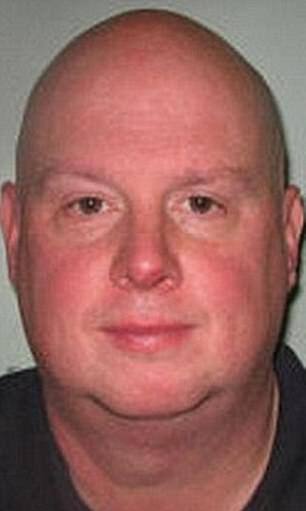 During the inquest, the conman has been described as a 'repeat offender' by his wife, as he had previously scammed high-profile sports figures, including Olympic athletes.

In 2016, he posed as an MI6 spy to dupe disgraced footballer Adam Johnson's family out of £170,000 after her was jailed for six years for intimately touching a girl of 15.

The family of the former Premier League star, who has now been released, allegedly made a stream of payments to a him - he then used the name Mark Hill-Wood - who promised he could unearth vital evidence in his favour.

The inquest jury have also been made aware of Marshall's previous mental health issues. He was known to have a personality disorder and had stabbed himself in the neck after being admitted to police custody in 2016.

The inquest at Southwark Coroner's Court has seen officers from SERCO, the contractor that supplies custody staff, face difficult questions over safety and security.

It is understood that Marshall had been allowed to bring his dark-coloured flask into the dock whilst awaiting sentencing, and had been handed it by a female dock officer.

According to the incident report form, the officer had 'placed this to one side and hadn't thought anything of it'.

Shortly after the sentencing, he had asked for the flask and was then 'screaming in pain' after ingesting the substance.

Pete Masters, the Head of Professional Standards at SERCO, had been present at the court at the time of the incident, and explained to the jury that possessions of the defendants were checked before they were admitted to the dock.

When asked by Senior Coroner Andrew Harris if the annual refresher training provided to custody staff had included liquid and food, he said: 'The sheer complexity of the detail from the standing operating procedure, it wouldn't be possible to cover every single element.'

He explained that at the time of the 'unfortunate incident', the policy had been to remove a defendant's possessions.

He said: 'Officers are trained to deal with any scenario with the deployment of interpersonal skills, communicating with the defendant or escalating the matter to bring other officers into the scene.'

The inquest is due to conclude on December 17.

Well at least we don’t have to pay for his imprisonment! All hard criminals should follow suit!

A convicted criminal has admitted killing a prison security officer by kicking her in the head as she was escorting him from his cell following a court appearance. Humphrey Burke, 28, who was described as “unpredictable and dangerous”, left Lorraine Barwell, 54, with catastrophic brain injuries when he attacked her at Blackfriars Crown Court in 2015.
PUBLIC SAFETY・24 DAYS AGO
Daily Mail

Husband of mother-of-five, 35, found drowned in a lake is released from custody and walks free from court after prosecutors dropped murder charge against him

Prosecutors have today dropped a murder charge against the husband of a mother-of-five who was found drowned in a lake. Andrius Vengalis, 46, was accused of killing Lithuanian-born Egle Vengaliene, 35, by holding her under the water at Brandon Country Park, Suffolk, in April last year. A court heard a...
MENTAL HEALTH・10 DAYS AGO
Daily Mail

'Fraudster' accused of conning £200,000 out of a retired lecturer, 74, before he was murdered with crossbow was a 'confidence trickster' who tried to 'manipulate' his grieving partner after he was shot, court hears

An alleged fraudster accused of conning £200,000 out of a retired lecturer before he was murdered was described as a 'confidence trickster, a court has heard. Gerald Corrigan, 74, and his partner Marie Bailey, 67, befriended Richard Wyn Lewis in 2015 and were allegedly conned out of more than £200,000 in the next four years, which they believed was for property developments, land sales and horses.
PUBLIC SAFETY・5 DAYS AGO
The Independent

A father whose 12-day-old baby was killed by the family pet has admitted to being in charge of a dangerously out-of-control dog.Elon Jase Ellis-Joynes was mauled to death by the Chow Chow cross at his home in Doncaster in September 2020.Dad Stephen Joynes, 36, admitted the offence under the Dangerous Dogs Act during a hearing at Sheffield Crown Court on Thursday.Mother Abigail Ellis, 28, has denied the same charge and will appear at court again on 11 February when prosecutors will make a further decision on the case. A trial is provisionally set for July.The couple were both released on...
PUBLIC SAFETY・24 DAYS AGO

Mohamud Hassan, 24, died hours after being released without charge from Cardiff Bay police station
LAW ENFORCEMENT・7 DAYS AGO
The Independent

A violent ex-partner travelled 28 miles on foot to stab a mother and her young autistic son to death in front of a distressed baby before leading police on a 24-hour manhunt, a court was told.Daniel Boulton, 30, is alleged to have knifed his former girlfriend Bethany Vincent and her nine-year-old son Darren Henson, also known as DJ, “numerous times” while the subject of a restraining order at around 8pm on May 31 last year.Boulton developed a “hatred” for Darren and walked from his address in Skegness to Ms Vincent’s home in High Holme Road in Louth Lincolnshire ...
PUBLIC SAFETY・3 DAYS AGO
The Independent

A mother jailed for killing her five-year-old son in 1991 has had her 2016 conviction thrown out after a review found there was not enough evidence to uphold it.Michelle Lodzinski was convicted of killing her son, Timothy Wiltsey, 25 years after he was last seen alive, after a breakthrough in the cold case in 2014 led to her arrest.Despite a jury finding her guilty two years later, New Jersey’s Supreme Court has now found that prosecutors failed to present enough evidence to prove that she deliberately caused his death.Ms Lodzinski was considered a prime suspect from the outset, due to...
ACCIDENTS・18 DAYS AGO
The Independent

A police constable accused of having inappropriate relationships with multiple women while on duty has been charged with three counts of misconduct in public office and two counts of computer misuse.Oliver Perry-Smith, 38, a Thames Valley Police (TVP) officer, was charged following an investigation by the Independent Office for Police Conduct (IOPC.)He will appear at Reading Magistrates’ Court on Tuesday, 11 January.The IOPC said in a statement: “Following a referral from TVP in November 2019, we began an investigation which was completed in June 2021. “We referred a file of evidence to the Crown Prosecution Service, which has taken the decision to authorise a charge against the officer.”
PUBLIC SAFETY・10 DAYS AGO

A Canadian court has halved the sentence of a woman who killed her husband, revisiting a controversial case that revealed the legal system’s “outdated thinking” of the realities of domestic abuse. In a 2-1 ruling released on Wednesday, Alberta’s court of appeal determined that Helen Naslund’s 18-year...
PUBLIC SAFETY・3 DAYS AGO
whdh.com

STONEHAM, MASS. (WHDH) - A man was told to stay away from a Stoneham liquor store after he allegedly crashed his car through it Saturday morning and then drank beer and smoked a cigar before he was arrested. John Bacigalupo, 54, of Revere, pleaded not guilty to charges of breaking...
STONEHAM, MA・6 DAYS AGO
The Independent

A man who had been due to stand trial for the murder of missing Diane Douglas has been found dead in his prison cell.Stuart Williamson, 56, was accused of killing Ms Douglas between December 1 and December 31 2018, when she would have been aged 55 or 56.Ms Douglas, from Colton, a village west of Norwich, was reported missing by family members on October 21 last year.Norfolk Police launched a “no-body” murder investigation after inquiries found Ms Douglas had not been seen for a “significant period”.The force said Ms Douglas’s remains were found in the garden of a house in...
PUBLIC SAFETY・2 DAYS AGO

A "cowardly" woman beater with a history of attacks has avoided jail despite committing "one of the worst domestic assaults" a police officer had ever seen. Aaron McCormick, aged 30, was given a suspended sentence after his latest attack, in which he punched his former partner in the face and ribs.
PUBLIC SAFETY・6 DAYS AGO
TheInterMountain.com

Man who escaped from court back in custody

Man who was shot by uncle appears in court

A man who was shot by his uncle after he allegedly attacked the relative appeared by video hookup in Baxter County Circuit Court Monday. Forty-three-year-old Jeremy Allen Woods of Calico Rock faces charges of third-degree domestic battering and violating a no contact order. While entering his not guilty plea, Woods...
BAXTER COUNTY, AR・4 DAYS AGO
The Independent

The Metropolitan Police says it will not change its position on investigating Downing Street parties after allegations over two new gatherings.A spokesperson for the force told The Independent that two reported leaving events for Boris Johnson’s then-director of communications and a personal photographer on the eve of Prince Philip’s funeral would not be investigated before a Cabinet Office inquiry ends.They pointed to a statement released on Thursday, which police “do not normally investigate breaches of coronavirus regulations when they are reported long after they are said to have taken place”.“However, if significant evidence suggesting a breach of the regulations becomes...
POLITICS・2 DAYS AGO
mynewsla.com

Three suspected members and an associate of a street gang are expected to make their initial federal court appearances Friday in downtown Los Angeles in connection with the fatal shooting of a 27-year-old off-duty Los Angeles Police Department officer. The three men and the 18-year-old girlfriend of one of them...
LOS ANGELES, CA・2 DAYS AGO
Daily Mail

Police pull over woman motorist, 55, for a 'routine check' only to discover she's been driving for 38 YEARS without a full licence

Traffic police in Wiltshire who pulled over a 55-year-old woman motorist in a routine check were shocked to find she had been driving without a full licence since 1983. The woman had been travelling on the A350 near Melksham when she was stopped by officers who were carrying out checks in the area.
PUBLIC SAFETY・19 DAYS AGO
Telegraph

A police officer who was jailed for assaulting two black members of the public while on duty has been found dead at his home. Declan Jones, a former constable with West Midlands Police, was said to have caused a public relations “disaster” for police with the assaults on consecutive days in April 2020.
LAW ENFORCEMENT・18 DAYS AGO
MyArkLaMiss

Man sentenced to 1,823 years in prison to be set free

Lawrence Stephens was a homeless restaurant worker and only 18 years old in 2001 when he and several others pulled off a home invasion robbery in the Seaford section of York County. According to his attorney, no one was home, no shots were fired and no one was injured.
PUBLIC SAFETY・26 DAYS AGO