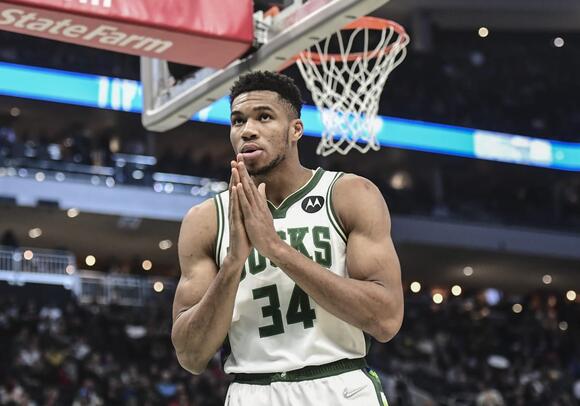 Giannis Antetokounmpo sent out a tweet after the Bucks beat the Hornets.

Giannis Antetokounmpo and the Milwaukee Bucks won their eighth game in a row when they beat the Charlotte Hornets 127-125 on Wednesday night.

Antetokounmpo went off for 40 points, 12 rebounds and nine assists.

The Bucks are coming off of a season where they won the NBA title, and Antetokounmpo won the Finals MVP.

After several seasons of coming up short in the playoffs, they finally broke through and won it all.

As for the Hornets, they are led by rising star LaMelo Ball, who was the 2021 Rookie of The Year.

They have not been to the playoffs since 2016, but that appears as if it will change soon.

More on the Charlotte Hornets can be read here.

For the tenth time this season, the Milwaukee Bucks will have to take to the court without their two-time MVP. Eric Nehm confirmed that Giannis Antetokounmpo would remain out against the Sacramento Kings. Nehm also noted that starting shooting guard Grayson Allen is out on Saturday night. The Greek Freak...
NBA・2 DAYS AGO
Chicago Tribune

The Chicago Bulls came inches from claiming the first round of battles with the Milwaukee Bucks this season, falling short by four points in a 94-90 loss Friday night at Fiserv Forum. It wasn’t the prettiest game for either team — both shot under 20% from 3-point rangein a vintage Midwestern slugfest as the Bucks and Bulls jockey for position at the top of the Eastern Conference. The Bulls ...
NBA・2 DAYS AGO
Sportsnaut

With the 2021-22 NBA season in full swing, basketball fans are putting on their jerseys and filling up arenas around
NBA・1 DAY AGO
San Diego Union-Tribune

Khris Middleton scored 34 points and Jrue Holiday added 26 to lead the Milwaukee Bucks to a 133-127 victory over the Sacramento Kings on Saturday night, making up for the absence of Giannis Antetokounmpo.
NBA・2 DAYS AGO

Milwaukee Bucks guard Jrue Holiday is starting in Saturday's game against the Sacramento Kings. Holiday will return to Milwaukee's starting lineup after Giannis Antetokounmpo was ruled out. In a matchup against a Sacramento unit allowing a 113.4 defensive rating, Holiday's FanDuel salary stands at $7,900. Per Rotogrinders' Court IQ in...
NBA・2 DAYS AGO
FastBreak on FanNation

Grayson Allen has been ruled out for the game between the Kings and Bucks on Friday night in Milwaukee.
NBA・2 DAYS AGO
FastBreak on FanNation

The Milwaukee Bucks are hosting the Sacramento Kings on Saturday night in Wisconsin.
NBA・2 DAYS AGO
FastBreak on FanNation

Kings Starting Lineup Against The Bucks

The Sacramento Kings have announced their starting lineup for their game against the Milwaukee Bucks.
NBA・2 DAYS AGO

The Atlanta Hawks look like they’re ready to make a move. The Charlotte Hornets are still a few steps ahead
NBA・2 DAYS AGO
FastBreak on FanNation

De'Aaron Fox has been ruled out for Saturday's game between the Sacramento Kings and Milwaukee Bucks.
NBA・2 DAYS AGO
Sportsnaut

Two of the most exciting point guards face each other in Charlotte.
NBA・1 DAY AGO

The wife of NBA legend Steph Curry has called the gossip 'ridiculous'. The wife of Golden State Warriors star Steph Curry, Ayesha, has addressed rumors that the couple is in an open relationship, labeling the speculation 'disrespectful'. Claims circled on gossip blogs in recent weeks and cited an anonymous tip...
CHARLOTTE, NC・14 DAYS AGO
fadeawayworld.net

Despite being brought in to help the Los Angeles Lakers compete for an NBA Championship, Russell Westbrook has had a seemingly negative impact on the franchise. So much so that he has been deemed as arguably the biggest flaw in the Lakers' roster this year. Moreover, against the Lakers' loss...
NBA・2 DAYS AGO
ClutchPoints

The Phoenix Suns are steamrolling the NBA once again. They became the first team to win 30 games this season due to their elite offense and even better defense. It’s not a matter of if, but who on Phoenix’s roster gets named an All-Star. Devin Booker has been...
PHOENIX, AZ・17 DAYS AGO
FastBreak on FanNation

The Golden State Warriors beat the Houston Rockets on a buzzer beater from Steph Curry, and after the game Curry spoke to the media.
NBA・2 DAYS AGO
fadeawayworld.net

Denzel Washington On Who Is The Greatest Basketball Player Of All Time: "I Was At The Chicago Bulls Game... When Michael Jordan Made That Famous Shot, And We Went Out To Dinner That Night..."

When it comes to the debate for being regarded as the greatest player of all time, usually people tend to choose either LeBron James or Michael Jordan. Even among them, the majority of people tend to tilt towards Jordan. After all, MJ achieved a lot of things in the NBA....
NBA・1 DAY AGO
fadeawayworld.net

Russell Westbrook has been underwhelming since he joined the Los Angeles Lakers before the start of this season. The former MVP has received a lot of the blame for the Lakers underperforming, with fans and analysts naming his inefficient play and careless turnovers for the Lakers' struggles. Considering all of that, there have been rumors that the Lakers are already willing to trade Westbrook.
NBA・19 HOURS AGO
FastBreak on FanNation

Steph Curry and the Golden State Warriors beat the Houston Rockets on Friday night, and Curry hit the first buzzer beater of his career.
NBA・2 DAYS AGO
FastBreak on FanNation