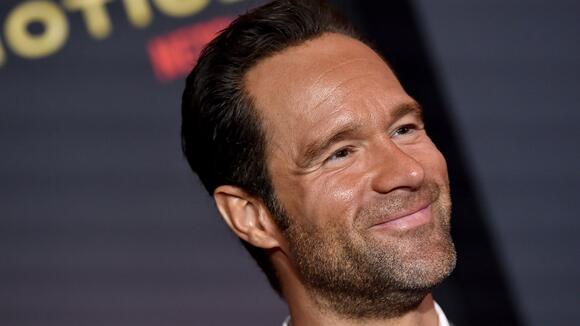 Actor Chris Diamantopolous joined Cheddar's "Between Bells" to talk about his new Netflix movie "Red Notice," starring alongside Ryan Reynolds, Dwayne Johnson, and Gal Gadot, and the massive success it has seen since its release. Diamantopoulos discussed what it was like stepping into the role of the villain, being able to play a character so different from himself in real life. He also talked about playing a heavy in another hit Netflix production, "True Story," and what it was like working with Kevin Hart and Wesley Snipes.

Another Television Character Dies by Peloton, This Time on 'Billions'

Coming off of a horrible week for Peloton on the stock market, another character from a TV series died after riding the stationary bike. Mike Wagner on "Billions" was the latest fictional tragedy, just a month after "Mr. Big" suffered a similar fate on the "Sex and the City" reboot "And Just Like That." Peloton tweeted it had not worked with the Showtime series on the episode.
TV & VIDEOS・3 DAYS AGO
Cheddar News

M&M's is rebranding its iconic chocolate candy characters with new looks and storylines highlighting the "progressive world" we live in today. Jane Hwang, global vice president of M&M's, joined Cheddar to talk about the company's rebrand. "M&M's is on a mission to create a world where everyone feels they belong," she said. The multi-colored, anthropomorphized candies will be getting an updated look and tone, according to Hwang, such as Green receiving a makeover that reflects more female empowerment and confidence.
FOOD & DRINKS・7 DAYS AGO
Cheddar News

The drama surrounding tennis star Novak Djokovic continues after he was deported from Australia over the weekend due to the nation's COVID-19 vaccine requirements. Djokovic was forced to leave the country on the eve of what was to be his first match in defense of his Australian Open title after three judges ruled in favor of his removal and revealed their reasoning for doing so. Adding to his woes, a law recently passed in France is putting his chances of defending his French Open title in jeopardy. The director of Marist's Center for Sports Communication, Jane McManus, joined Cheddar to discuss the ongoing fallout.
TENNIS・7 DAYS AGO
Variety

For the first time since leaving Dunder Mifflin, “The Office” co-stars Steve Carell and John Krasinski will reunite on-screen in Paramount’s new family movie “If.” Krasinski will write, direct and star in the film. Along with Carell, “An Officer and a Gentleman” and “Roots” star Louis Gossett Jr., “Minari” breakout Alan Kim, and “The Walking Dead” actor Cailey Fleming have also been added to the call sheet. They will join previously announced cast members Ryan Reynolds, Phoebe Waller-Bridge and Fiona Shaw. The official logline has yet to be revealed, but the story is based on Krasinski’s original idea about a child’s journey...
MOVIES・2 DAYS AGO

Sony Pictures has acquired “Father Stu,” a true-life drama starring Mark Wahlberg and Mel Gibson. Rosalind Ross wrote and directed the faith-based movie, which will be released in theaters on Good Friday, April 15. Written and directed by Rosalind Ross, “Father Stu” tells the story of boxer-turned-priest Father Stuart Long and his inspiring journey from self-destruction to redemption. Along with Wahlberg, who plays the title character, and Gibson, the film features Jacki Weaver and Teresa Ruiz. “Father’s Stu’s journey from troublemaker to clergyman was inspiring to many, including me,” said Wahlberg. “Rosey has done an incredible job capturing the essence of who he...
MOVIES・2 DAYS AGO
Variety

Ron Perlman is hitting back against critics of Adam McKay’s Netflix satire “Don’t Look Up,” in which the “Hellboy” favorite stars opposite an ensemble cast that includes Leonardo DiCaprio, Jennifer Lawrence, Meryl Streep, Jonah Hill, Timothee Chalamet, Joe Morgan and Mark Rylance. Perlman stars in the movie as Colonel Benedict Drask, a war veteran tasked with flying to space to destroy a comet that’s heading toward the planet. “Don’t Look Up” has become one of Netflix’s biggest original films to date since debuting on Dec. 24 on the streamer. “Fuck you and your self-importance and this self-perpetuating need to say everything...
MOVIES・1 DAY AGO
Deadline

Peter Dinklage, the Game of Thrones actor currently starring in the feature film Cyrano, slammed plans for a Disney live-action remake of Snow White and the Seven Dwarfs, telling podcaster Marc Maron that the project is “f*cking backwards.” Disney’s latest adaptation of the classic 1938 animated film is set to star West Side Story actror Rachel Zegler as Snow White, Gal Gadot as the Evil Queen and Andrew Burnap as a newly created male lead character. “I was a little taken aback when they were very proud to cast a Latina actress as Snow White,” Dinklage said on Maron’s WTF podcast yesterday. “You’re still telling the story of Snow White and the Seven Dwarfs. Take a step back and look at what you’re doing there. It makes no sense to me. You’re progressive in one way and you’re still making that f*cking backwards story about seven dwarfs living in a cave together. What the f*ck are you doing man? Have I done nothing to advance the cause from my soapbox?” The planned remake will feature original songs from Benj Pasek and Justin Paul, and is expected to go into production in the UK this spring.
MOVIES・2 DAYS AGO
celebritypage.com

According to Deadline, Netflix plans to shoot two more sequels to Red Notice. Red Notice is officially coming back! The beloved action comedy follows two agents as they hunt down a wanted art thief. Dwayne, "The Rock" Johnson and Ryan Reynolds star, alongside Gal Gadot. With its action-packed scenes and hilarious one-liners, it's safe to say that these sequels have a lot to live up to.
TV & VIDEOS・14 DAYS AGO

Netflix's Latest Hit Horror Thriller Is Based on a True Story

Netflix recently added Aileen Wuornos: American Boogeywoman to its roster of horror movies. Like many new-to-Netflix movies, the film shot straight to the Top 10 Movies in the U.S. chart and now holds the number three spot on the chart. The movie was written and directed by Daniel Farrands, who is also responsible for The Haunting of Sharon Tate, The Murder of Nicole Brown Simpson and Ted Bundy: American Boogeyman.
MOVIES・19 HOURS AGO
film-book.com

A Couple of RED NOTICE Sequels Have Been Planned for Netflix

Two Red Notice Sequels Are Being Developed for Netflix. Not one but two sequels to the hit 2021 Netflix film, Red Notice, are being developed and will most likely be filmed together. When the 2021 audience pleasing success Red Notice premiered on Netflix, it scored some of the best viewing...
TV & VIDEOS・14 DAYS AGO
Decider.com

Is ‘American Boogeywoman’ Based on a True Story? What to Know About the Aileen Wournos Netflix Film

Netflix is delving into true crime once again, but this time, it’s not just a docuseries. Peyton List stars as the lead of Aileen Wuornos: American Boogeywoman, following a notorious serial killer as she rises to infamy in Florida. It feels like a true story, but really, how much is American Boogeywoman telling us the truth about Wuornos? Let’s investigate.
MOVIES・2 HOURS AGO

1984’s “Karate Kid” is known for having one of the most iconic bullies in cinema. Johnny Lawrence, star student of the violent and aggressive Cobra Kai Karate dojo, relentlessly picks on the underdog, Daniel LaRusso. For nearly 40 years, this was the only narrative set forth by the franchise: Underdogs always win, bullies lose and they deserve it.
TV SERIES・8 DAYS AGO
GeekTyrant

Netflix has released a new trailer for its upcoming series Inventing Anna, which tells the fascinating true story of fake heiress Anna Sorokin. The series stars Julia Garner (Ozark, Dirty John) in the role of Anna, who infiltrated the world of the super-rich and conned them out of a lot of money.
TV SERIES・10 DAYS AGO
Insider

In a statement sent to The Hollywood Reporter, the company said the live-action movie is "taking a different approach" to the seven dwarf characters.
MOVIES・2 DAYS AGO
GeekTyrant

It was recently announced that Peter Billingsley will be teaming up with Legendary and Warner Bros. to bring us a sequel to the 1983 classic, dare I say masterpiece, A Christmas Story. Billingsley and Vince Vaughn’s Wild West Picture Show will be producing the film that is set to film in late February in Bulgaria. Bulgaria? Well, I guess we will roll with that one.
MOVIES・6 DAYS AGO
The Tab

The Puppet Master on Netflix: The true story of Robert Hendy-Freegard and where he is now

Netflix has just released a new true crime documentary series all about the life and crimes of Robert Hendy-Freegard. The series is called The Puppet Master: Hunting The Ultimate Conman and explores his crimes from when they first started, right into modern day. Robert Hendy-Freegard conned at least seven women...
TV SERIES・9 DAYS AGO
First Showing

"Pinocchio is not just a puppet, he's a miracle!" Lionsgate has unveiled an official US trailer for an 3D CG animated movie called Pinocchio: A True Story, originally made in Russia by a Russian filmmaker. This is not the same as the upcoming Guillermo del Toro stop-motion animated Pinocchio movie that was also teased this week. It's the third new Pinocchio movie in the last few years, along with the Italian live-action version recently. This release will be available with an English-language voice cast, featuring Pauly Shore, Jon Heder, and Tom Kenny (of "SpongeBob" fame). Young Pinocchio runs away from his genius creator Jepetto accompanied by the horse Tibalt to see the world and joins the traveling circus run by the hustler Modjafocco. No surprise, this looks awful, with bad animation, a bad story, and bad voice work. Stay away.
MOVIES・1 DAY AGO
Deadline

EXCLUSIVE: Musician and filmmaker Flying Lotus has set the sci-fi horror film Ash as his second feature, on the heels of his body horror anthology Kuso, which made its world premiere at the 2017 Sundance Film Festival. The new film, for which the multi-hyphenate will also compose an original score, watches as a woman wakes up on a distant planet and finds the crew of her space station viciously killed, her investigation into what happened setting in motion a terrifying chain of events. Jonni Remmler penned the original screenplay. XYZ Films and GFC Films will produce, with Echo Lake on board as exec...
MOVIES・1 DAY AGO
epicstream.com

One of the upcoming MCU shows that are currently in the works right now is Secret Invasion which will star Samuel L. Jackson's Nick Fury and Ben Mendelsohn's Talos as they navigate the Skrulls who have infiltrated all aspects of life on Earth. Filming for the series is currently underway as evidenced by numerous set photos that have been surfacing online recently. Now, thanks to them, we finally have our first look at the series' villain.
TV & VIDEOS・2 DAYS AGO