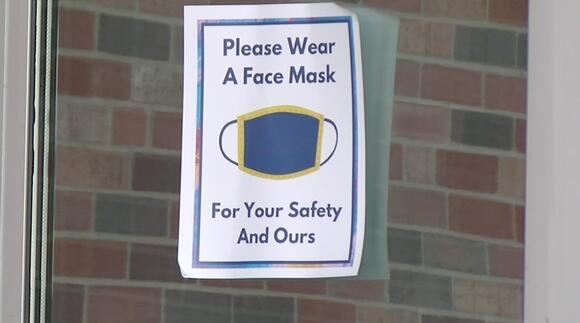 Counties where mask mandates were implemented experienced a lower number of COVID-19 cases and deaths, according to a data analysis conducted by the Department of Health and Senior Services and obtained through an open records request by the Missouri Independent and the Documenting COVID-19 project. However, state officials say the information shared was taken out of context.

By comparing the seven-day averages of cases in Missouri counties with and without mask mandates in place, the graphs show that both case and death numbers were lower during the peak of the delta variant in counties that enforced mask-wearing.

The Independent reported that the analysis was conducted at the request of Gov. Mike Parson's office on Nov. 1, but not shared publicly. However, Parson took to Twitter Thursday evening to say the article was "misleading" and "[the reporter] left out important information that provides context for the whole story."

Rudi Keller, the Missouri Independent deputy editor that worked on the report, spoke with ABC 17 about how the emails were uncovered.

"The Documenting COVID project regularly submits Sunshine Requests to the Department of Health and Senior Services as part of its ongoing work to review how states are handling the COVID pandemic around the country," Keller said.

The graph was obtained through the Missouri Independent's work with Documenting COVID-19 project at The Brown Institute for Media Innovation.

In emails obtained by the Missouri Independent, Donald Kauerauf, DHSS director, said "with great confidence" that the data proved there was lower transmission in counties with mask mandates.

Lisa Cox, spokesperson for DHSS, shared the emails with ABC 17, but said, "We do not have any official studies drawing conclusions solely from mask mandates being in place."

Four Missouri counties have mask mandates in place — St. Louis, St. Louis County, Kansas City and Jackson County -- and the Missouri attorney general's office has active or pending lawsuits against each of them. The attorney general has also sued Columbia Public Schools over its mask mandate.

Chris Nuelle, Attorney General Eric Schmitt's press secretary, said the attorney general's office finds the conclusion of the study inaccurate because case rates were higher in masked counties before the time period shown in the graphs.

"We’ve been clear that Missourians should have the right to make their own decisions, and that government bureaucrats shouldn’t be mandating masks or vaccines," Nuelle said. "We will continue to fiercely litigate our lawsuits against mask mandates in Missouri."

A hearing in the St. Louis County lawsuit was rescheduled from Tuesday to next Thursday, Dec. 9, to provide time for attorneys to consider the impact of a recent Cole County ruling barring local health officials from issuing health mandates.

Check back for updates to this developing story and watch ABC 17 News at 6.

Check back for updates related to the coronavirus pandemic in Missouri. The post MONDAY UPDATES: Boone County reports no coronavirus updates due to increased workload for staff appeared first on ABC17NEWS.
BOONE COUNTY, MO・15 HOURS AGO
KMIZ ABC 17 News

Check back for updates related to the coronavirus pandemic in Missouri. The post MONDAY UPDATES: State of Missouri reports hospital and ICU capacity trending down appeared first on ABC17NEWS.
MISSOURI STATE・15 HOURS AGO
KMIZ ABC 17 News

Check back for updates related to the coronavirus pandemic in Missouri. The post MONDAY UPDATES: Cole County continues to report large numbers due to data backlog appeared first on ABC17NEWS.
COLE COUNTY, MO・15 HOURS AGO

COLUMBIA, Mo. (KMIZ) Health care leaders are asking Missourians to only use emergency departments when it is an emergency in the few weeks as emergency rooms are overcrowded at most hospitals. The Missouri Hospital Association and Missouri Department of Health and Senior Services encourage patients experiencing severe illness or a life-threatening condition to continue to The post Missouri warns against overusing emergency departments as locals say they are struggling the keep up appeared first on ABC17NEWS.
COLUMBIA, MO・8 HOURS AGO

Check back for updates related to the coronavirus pandemic in Missouri. The post MONDAY UPDATES: Hospitals urge Missourians to use emergency rooms for emergencies amid COVID-19 surge appeared first on ABC17NEWS.
MISSOURI STATE・15 HOURS AGO
KMIZ ABC 17 News

QUESTION OF THE DAY: Should state employees get a pay raise?

Gov. Mike Parson has made raising pay for Missouri state workers a priority for the current legislative session. The post QUESTION OF THE DAY: Should state employees get a pay raise? appeared first on ABC17NEWS.
MISSOURI STATE・1 HOUR AGO
KMIZ ABC 17 News

State of Missouri reports no flu cases in Boone County

The Missouri State Health Department shows the start of a decline of influenza cases across the state for the second week. The post State of Missouri reports no flu cases in Boone County appeared first on ABC17NEWS.
BOONE COUNTY, MO・3 DAYS AGO

COLUMBIA, Mo. (KMIZ) Columbia police will resume traffic law enforcement after stopping it due to the coronavirus in 2020, according to Police Chief Geoff Jones. Under a special order, Columbia police were authorized to stop drivers only for hazardous moving violations and indicated for criminal investigation purposes. "The health emergency called for clear action to The post Columbia police to resume full enforcement of traffic laws appeared first on ABC17NEWS.
COLUMBIA, MO・10 HOURS AGO
KMIZ ABC 17 News

Check back for updates related to the coronavirus pandemic in Mid-Missouri. The post THURSDAY UPDATES: State of Missouri nears one million confirmed COVID cases appeared first on ABC17NEWS.
MISSOURI STATE・4 DAYS AGO

According to Missouri's Department of Health and Senior Services, unvaccinated or partially unvaccinated people account for 88% of COVID-19 deaths in Missouri. Just 0.03% percent of people who are fully vaccinated have died from the virus in Missouri. The post Hospitals seeing worst cases of COVID-19 in unvaccinated as omicron surge presses on appeared first on ABC17NEWS.
COLUMBIA, MO・3 DAYS AGO
KMIZ ABC 17 News