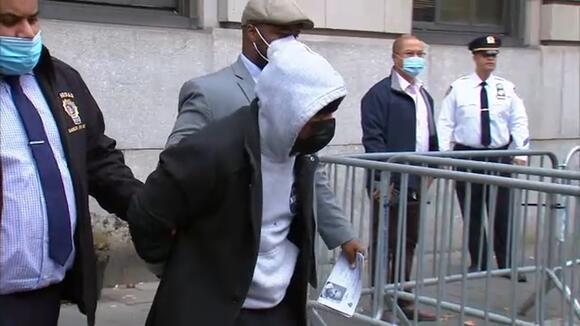 Police have arrested a suspect in a shooting that killed an Uber driver in September in Harlem. Authorities say 23-year-old Joselito Domena was arrested Thursday on charges of murder, attempted murder, criminal possession of a weapon and reckless endangerment. Domena is accused of opening fire in the back of the Uber, hitting 21-year-old Kuldip Singh in the head with a stray bullet. Authorities say Singh was shot during an apparent robbery attempt on street just before 10 p.m. on Saturday, September 4. It happened in the vicinity of West 131st Street and Eighth Avenue, and a 15-year-old boy was also critically wounded. Police say the gunman got into the Uber, which had a passenger at the time, in the ill-fated robbery attempt. It's unclear whom the shooter was firing at, but video shows a muzzle flash inside the car and the teenager drop outside on the sidewalk. A second flash is presumed to be the shot that killed Singh. The passenger was uninjured and cooperated with police. "Our hearts are with Mr. Singh, his passengers, and their loved ones after this horrific and senseless act of violence," an Uber spokesperson said at the time of the shooting. ALSO READ | Cops explain how new DNA technology led to arrest in 1999 cold case

NEW YORK (CBSNewYork) — Lashawn McNeil, the man police say opened fire on NYPD officers in Harlem late last week, killing one and gravely injuring another, died at the hospital Monday, police sources told CBS2. McNeil, 47, was shot in the head and right arm as he tried to flee the scene, police said. Officers Jason Rivera and Wilbert Mora responded to a 911 call from a woman who said she was having a dispute with her son at around 6:30 p.m. Friday on West 135th Street between Lenox Avenue and Adam Clayton Powell Boulevard. The woman told police she recently had a medical...
NEW YORK CITY, NY・2 DAYS AGO
The Independent

The man who shot two New York City police officers in a Harlem apartment, killing one of them and putting another in critical condition, died Monday of injuries sustained when a third officer shot him, Mayor Eric Adams said.Lashawn J. McNeil, 47, had swung open a bedroom door and opened fire at the officers Friday as they responded to a domestic call, authorities said. Officer Sumit Sulan, a rookie who was shadowing the two wounded officers, shot McNeil as he tried to flee, striking him in the head and arm, police said.A law enforcement official told The Associated Press...
PUBLIC SAFETY・2 DAYS AGO
Newsweek

Mother Stabbed Repeatedly by Her Own Children, Police Say

The victim was able to call the police and tell them to come to her home after the attack.
SAN ANTONIO, TX・11 HOURS AGO
WXYZ

ATLANTA (AP) — Atlanta police have arrested a 22-year-old man in the shooting of a 6-month-old baby's death. Police said Grayson Fleming-Gray was shot just after 2:30 p.m. Monday while riding in a vehicle. Mayor Andre Dickens announced the arrest during a news conference Tuesday afternoon, praising police for...
ATLANTA, MI・1 DAY AGO

Man knocked to the ground, punched repeatedly during robbery in Bronx apartment lobby

A 66-year-old man was knocked to the ground and punched repeatedly during a startling robbery inside an apartment building lobby in the Bronx.
BRONX, NY・4 DAYS AGO
ABCNY

NYPD officer Wilbert Mora, who was shot and his partner killed while responding to a domestic call in Harlem, has died from his injuries, NYPD Commissioner Keechant Sewell announced Tuesday.
MANHATTAN, NY・1 DAY AGO

Police in Newark say two men and a 15-year-old have been arrested while sleeping in a stolen vehicle.
NEWARK, NJ・18 HOURS AGO
CBS New York

New Video In Search For Gunman Who Shot 11-Month-Old With Stray Bullet; Reward Up To $10,000

NEW YORK (CBSNewYork) — The search continues for the gunman who struck a baby girl with a stray bullet last week in the Bronx. Police released new surveillance video showing the suspect running from the scene, and the gray Nissan sedan he used to get away. (Credit: NYPD) The girl was hit in the cheek while sitting in a parked car with her mother last Wednesday in Bedford Park — just days shy of her first birthday. She underwent surgery last week. A reward in the case is now up to $10,000. Anyone with information about the shooting is asked to call the NYPD’s Crime Stoppers hotline at 1-800-577-TIPS (8477), or for Spanish, 1-888-57-PISTA (74782). You can also submit a tip via their website or via DM on Twitter, @NYPDTips. All calls are kept confidential.
BRONX, NY・1 DAY AGO
ABCNY

A 16-year-old was shot in the back of the head and is in critical condition at the hospital.
BROOKLYN, NY・3 DAYS AGO
CBS Sacramento

YUBA CITY (CBS13) — Two Yuba City police officers suffered minor injuries in a violent crash that occurred during a chase, authorities said Monday. (credit: California Highway Patrol Yuba-Sutter) According to California Highway Patrol Yuba-Sutter press release Monday afternoon, the officers responded to a pursuit of a stolen truck. The driver of the truck reportedly tried to ram another patrol car that also responded. At some point during the chase the front-end of the two injured officers’ vehicle collided with an uninvolved car, the CHP said. The driver of that car also suffered minor injuries despite the severity of the vehicles’ damage. Authorities have not yet released further information on the stolen truck and following events.
YUBA CITY, CA・2 DAYS AGO

OAKLAND (CBS SF) — Police in Oakland on Monday confirmed the recent arrest of a suspect who was wanted for shoving an elderly Asian woman to the ground earlier this month. The assault that was captured on video happened on January 10 on the 300 block of 9th Street near Franklin. The woman who was attacked can be seen walking westbound on 9th toward Franklin when a man came up behind her and pushed her, causing her to fall on the ground. The man kept walking northbound on Franklin Street and was not located. Police said a witness saw the victim had minor...
OAKLAND, CA・2 DAYS AGO
ABCNY

The NYPD says the 38-year-old woman walked into the lobby of the building when the man slapped her backside.
QUEENS, NY・1 DAY AGO
CBS Pittsburgh

CORAOPOLIS, Pa. (KDKA) – People gathered outside of Magisterial District Court in Coraopolis to show their support for a 9-year-old girl named Dezi who fought back when a stranger tried to drag her from her bus stop. Forty-year-old William Gorring was inside Magisterial District Judge Michele K. Santicola’s courtroom for his preliminary hearing on Tuesday. Gorring entered a not guilty plea on all six charges and the charges were held for court. He had nothing to say as he left the courtroom. “We’re just here to bring awareness to the issue and to support Dezi because she is an amazing little girl...
CORAOPOLIS, PA・1 DAY AGO
ABCNY

BALTIMORE (WJZ) — Police in New York City are still trying to trace a Glock 45 handgun with an extended 40-round magazine, which they said LaShawn McNeil obtained in Baltimore and used to shoot two officers in Harlem on Friday night. Police believe the weapon was stolen in 2017. Below is a picture of the gun used to shoot our officers. pic.twitter.com/TkcMR2tr83 — NYPD NEWS (@NYPDnews) January 22, 2022 Investigators later located an AR-15 assault rifle under McNeil’s mattress. A day after Officers Rivera and Mora were shot in Harlem, your NYPD detectives were still on the scene executing a court-authorized search which lead to...
BALTIMORE, MD・2 DAYS AGO
ABCNY

Detectives believe the victim was shot by a person in the other vehicle, which then fled the scene.
BRONX, NY・6 HOURS AGO
ABCNY

The 22-year-old NYPD police officer who was shot to death in Harlem Friday night, joined the force to make a difference in the "chaotic city," he once wrote.
NEW YORK CITY, NY・4 DAYS AGO