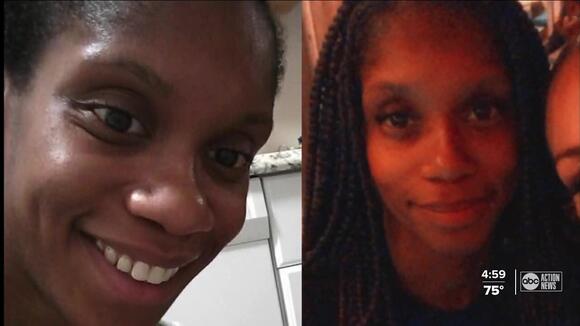 PASCO COUNTY, Fla — The Pasco County Sheriff's Department continues to follow every lead as they search for Kathleen Moore. She has been missing since November 29 when she was seen in New Port Richey near Carmel Avenue around 1 a.m.

On Monday, Dec. 6, Pasco deputies said they made an arrest related to the missing person case.

Since then, friends and family of Moore have been joining the search trying to find the missing woman. Investigators said they have found her phone and the forensic team searched the home she visited last.

Below, ABC Action News will publish the latest development on the search from the Pasco County Sheriff's Office as they become available.

Kathleen Moore's manager, Jaime Poe, is speaking out, asking for anyone who has information to let authorities know.

Pasco deputies have made an arrest related to the missing person case for Kathleen Moore.

In a press release, the Pasco County Sheriff's Office said the case for Kathleen Moore remains a missing person case and not a criminal case.

"There are no 'persons of interest' or 'suspects' at this time. We continue to speak with Moore's family and friends to gain any additional information we can."

Pasco Sheriff's deputies left a search area behind 7-Eleven on Seven Springs Boulevard in New Port Richey with what appeared to be a bag of evidence.

Close friends of Moore's told ABC Action News they first searched the woods behind the gas station and found, what they believe to be, Moore's clothes she was reportedly last seen wearing. Friends said they alerted detectives after discovering the clothes.

A Pasco Sheriff spokesperson did not confirm if the discovered clothes belong to Moore. The spokesperson told an ABC Action News reporter in a text message:

"For the integrity of the investigation, no factual information such as that is available at this time."

"I miss her. I miss her so much," Faith Zessin, Moore's goddaughter told ABC Action News. "She was my God mom, but more like my best friend. She's been there for everything."

That is why, Zessin said, it was unlike Moore to stop responding to calls or texts.

"When I found out that her phone had been found in a dumpster, I was like, 'Okay, this is serious.'" she said. "We all have a bad gut feeling about it because we know what she's a fighter, but there's only so much that...you know."

Zessin's confidence waivers, but her memories with Moore do not. Her godmother stays with her through old pictures and videos of cherished times together.

Friday night, close friends of Moore's joined together at Whiskey Wings in St. Petersburg where Moore is a bartender.

Nikki Wallen is Moore's best friend of 20 years. Wallen says Moore left her vehicle at Wallen's house, Sunday, November 28, before leaving in her boyfriend's vehicle. Wallen helped file a missing person report after Moore never showed up to get her vehicle on Monday or Tuesday.

"Sunday, when she walked out my front door and took her heels off that were hurting her feet, they are still by my front door, I never heard from her again," Wallen said.

Moore's friends lit candles at a memorial set up in the corner of the sports bar. Tim McGoff, a regular at Whiskey Wings, says Moore is his favorite bartender.

"Not to say the other ones aren't great," he said.

After years of getting to know Moore, McGoff considers her not only a friend, but a happy-hour family.

"It's been very hard for everybody. I would like to think that she's okay," McGoff said. "I hope that, but I don't know."

Pasco Sheriff's deputies and the forensics team are set up at a home on Carmel Avenue in New Port Richey where a missing Largo woman was last seen.

Pasco deputies are searching for Kathleen Moore. She was last seen in New Port Richey on November 29.

The sheriff's office said her phone was also found in New Port Richey.

If you have any information on Moore’s whereabouts, you can call the Pasco Sheriff’s Non-Emergency Line at 727-847-8102, option 7.

Beijing — China on Monday canceled plans to sell tickets to the public for the Winter Olympics in Beijing, as the number of COVID-19 cases in the country reached its highest since March 2020. Organizers said last year there would be no international spectators at the Games — partly due to China's weeks-long quarantine requirements — but they had promised to allow domestic audiences. Those plans were scrapped on Monday as China reported 223 new infections just three weeks before the Winter Olympics are set to open.
SPORTS・18 HOURS AGO
The Associated Press

DUBAI, United Arab Emirates (AP) — Satellite photos obtained by The Associated Press on Tuesday appear to show the aftermath of a fatal attack on an oil facility in the capital of the United Arab Emirates claimed by Yemen’s Houthi rebels. The images by Planet Labs PBC analyzed...
ENERGY INDUSTRY・2 HOURS AGO

(CNN) — A thick layer of ash covering entire island communities can be seen in the first images of disaster-hit Tonga to emerge following what experts believe to be the world's biggest volcanic eruption in more than 30 years. Aerial photos released by the New Zealand Defense Force from...
ENVIRONMENT・1 HOUR AGO
The Associated Press

COLLEYVILLE, Texas (AP) — An armed man who took four people hostage during a 10-hour standoff at a Texas synagogue had spent time in area homeless shelters in the two weeks leading up to the attack, and was dropped off at one by someone he appeared to know. Malik...
TEXAS STATE・2 HOURS AGO
CBS News

BEIJING (AP) — Beijing’s first reported case of the omicron variant has prompted stepped-up measures in the nation’s capital, just weeks before it hosts the Winter Olympic Games. Following the positive test announced Saturday, more than 13,000 people and all places visited by the patient over the...
PUBLIC HEALTH・1 DAY AGO

Seven bipartisan senators are in Ukraine to meet with President Zelenskyy and officials to reaffirm the U.S.' commitment to Ukraine as Russian troops amass at the border.
CONGRESS & COURTS・12 HOURS AGO
Reuters

ZURICH/FRANKFURT/HONG KONG, Jan 17 (Reuters) - After taking over as chairman of Credit Suisse, Antonio Horta-Osorio pledged to develop a culture of personal accountability at the Swiss bank following a string of scandals. That promise ultimately sealed his fate as he was forced to resign after barely eight months in...
WORLD・15 HOURS AGO