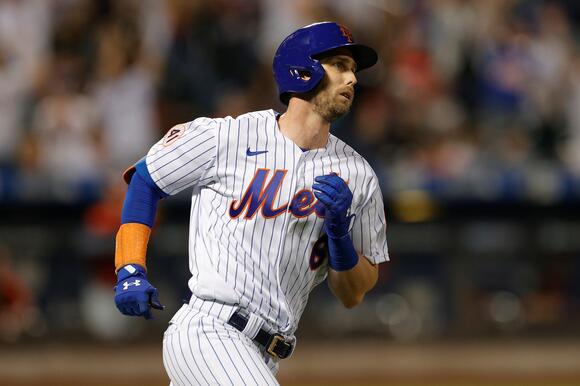 Whether or not Jeff McNeil was No. 1 in your hearts after the rat/raccoon fiasco, he will be No. 1 in your scorebooks whenever baseball resumes.

According to MLB.com’s Mets roster page, which looks a lot different right now thanks to the lockout, McNeil has switched from No. 6 to No. 1 in deference to newly-signed Starling Marte, who will take the No. 6 he wore in both Pittsburgh and Miami.

The page also lists other new Mets as Eduardo Escobar wearing No. 10, Mark Canha wearing No. 19, and Max Scherzer taking No. 21 – a change because both of the numbers he’s worn for the majority of his career, 31 and 37, are retired for Mike Piazza and Casey Stengel (he also wore 39 briefly in Arizona as a rookie, but apparently did not want to take that from Edwin Diaz).

Marte also wore No. 2 for his brief stints in Arizona in 2020 and Oakland in 2021, the former because David Peralta had No. 6 and the latter because No. 6 in Oakland belonged to manager Bob Melvin.

Usually, that kind of change for an established player means one of two things: either McNeil did it out of benevolence, or Marte, who just signed a four-year, $78 million deal, gave up something nice to get his preferred number.

Three weeks from when pitchers and catchers usually report and no one knows when spring training will start or if it will be a truncated schedule.
MLB・1 DAY AGO
Audacy

The Dodgers catcher explained how he approaches the highs and lows of a MLB season.
MLB・2 DAYS AGO
Inside The Phillies

A new change will be implemented in the upcoming minor league season.
MLB・2 DAYS AGO

Yankees legend Alex Rodriguez randomly showed up on the TV in the fourth quarter of Saturday’s divisional playoff game between the Packers and 49ers.
NFL・1 DAY AGO
Inside The Phillies

After a disappointing 2021 campaign, what are the Phillies' options with Didi Gregorius?
MLB・2 DAYS AGO
Inside The Blue Jays

Jean Segura doesn't put up flashy numbers or make dazzling defensive plays, but all together he is one of the most well-rounded players in the National League.
MLB・1 DAY AGO

Alec Bohm was one of the league's worst fielders in 2021. As trade rumors swirl this offseason, it would mean a lot for the Phillies if Bohm could put a hammerlock on his natural position.
MLB・1 DAY AGO
Inside The Phillies

The two sides are starting to step up the pace of their meetings.
MLB・16 HOURS AGO
Inside The Phillies

Five years after signing on as Phillies general manager, Matt Klentak has accepted a job as special assistant for the Milwaukee Brewers.
MLB・21 HOURS AGO
Inside The Dodgers

The MLB and MLBPA are set to meet on Monday to continue CBA negotiations.
MLB・1 DAY AGO

In less than a month, Orioles pitchers and catchers are scheduled to report to Sarasota, Florida, to mark the start of spring training. Yet, there remains uncertainty as to whether that will happen as planned with the league’s owners continuing to lock out the players as the two sides plod toward a new collective bargaining agreement. But as the lockout marches on, so too does Oriole of the ...
MLB・1 DAY AGO
San Diego Union-Tribune

Sizing up the Padres' 40-man roster heading into the 2022 season: Trent Grisham slumped badly after returning from his second stint in the injured list
MLB・19 MINUTES AGO
Inside The Royals

The Kansas City Royals drafted pitcher Ben Hernandez fresh out of high school in 2020, but he could display quite a bit of maturity and growth just two years later.
MLB・2 DAYS AGO
Inside The Blue Jays

Carter's fiery demeanor got him noticed by Blue Jays scouts. Now it's his humility off the field that's impacting the city of Toronto.
MLB・1 DAY AGO

If there is a Major League season, the Mets are expected to be serious contenders.
MLB・9 HOURS AGO
WEEI Sports Radio

Bill James served as the Boston Red Sox’ senior advisor for 17 years. Recently, he made some cryptic accusations about the 2011 Red Sox’ broken chemistry.
MLB・19 HOURS AGO