Canadian cannabis company Sundial Growers (NASDAQ: SNDL) restructured its business this year to run a cannabis cultivation and production segment alongside an investment arm. It has subsequently increased its commitment to the investment business multiple times, and made a new announcement related to its future today. The market reacted positively, and Sundial stock popped 5.3% in early trading Thursday. As of 12:48 p.m. ET, Sundial shares remained up 4.5%.

In March 2021, Sundial announced a strategic partnership to form SunStream Bancorp as a joint venture. The venture was meant to create an investment arm that Sundial would use to grow alongside its cannabis operations business. Sundial has now announced it has filed for an initial public offering (IPO) of Sunstream IVXX Investment Corp. The company said the entity will be a specialty finance company and anticipates it will be legally regulated as a business development company (BDC). 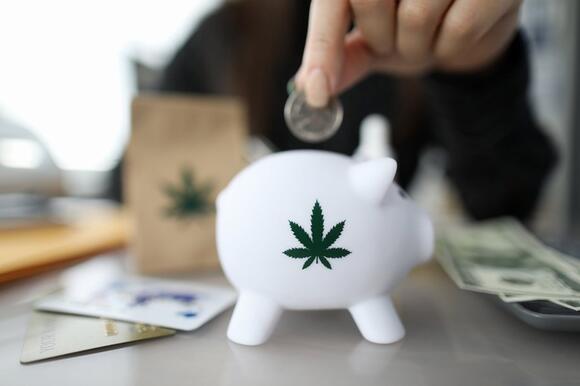 Sundial initially announced it would commit 100 million Canadian dollars to the SunStream Bancorp joint venture that would allow it to continue to focus on its cannabis operations while also participating in new investments in the sector. The company subsequently increased the capital it added to SunStream twice, for a total commitment of more than $400 million in U.S. dollars.

The latest announcement to create a new public company as a SunStream affiliate is intended to broaden Sundial's interest in cannabis investments into the U.S. Details including number of shares and price range for the IPO haven't been announced, but Sundial said in a statement, "The purpose of the offering is to use the net proceeds therefrom to invest primarily in the debt of U.S. cannabis companies across the cannabis industry."

Investors are cheering the move to continue to seek growth through investments in other cannabis businesses. Focusing on U.S. businesses also brings more potential should the market open up if federal legalization materializes in the future.

Here's The Marijuana Stock You've Been Waiting For
A little-known Canadian company just unlocked what some experts think could be the key to profiting off the coming marijuana boom.

And make no mistake – it is coming.

Cannabis legalization is sweeping over North America – 15 states plus Washington, D.C., have all legalized recreational marijuana over the last few years, and full legalization came to Canada in October 2018.

And one under-the-radar Canadian company is poised to explode from this coming marijuana revolution.

Because a game-changing deal just went down between the Ontario government and this powerhouse company...and you need to hear this story today if you have even considered investing in pot stocks.

Simply click here to get the full story now.

Despite lagging the market in the past year, these two tech companies boast historical returns any company would be proud of.
STOCKS・22 HOURS AGO
The Motley Fool

3 Marijuana Stocks That Could Make You Richer

The marijuana industry is not one to be overlooked.
STOCKS・21 HOURS AGO
The Motley Fool

The tech sector is having a rough couple of months, but top Wall Street firms have identified some enticing opportunities.
STOCKS・22 HOURS AGO
The Motley Fool

You might be surprised at how much this diversified mix of well-known companies has beaten the market.
STOCKS・18 HOURS AGO

Worried about fighting the Fed? Don't miss out on these potentially explosive stocks.
STOCKS・21 HOURS AGO
The Motley Fool

This Breakout Growth Stock Outpaced Bitcoin in 2021 -- Is It a Surefire Buy Right Now?

This brand's popularity has surged ever since the pandemic started.
STOCKS・19 HOURS AGO
The Motley Fool

If you're looking to invest in artificial intelligence companies, these three are amazing growth ideas.
MARKETS・21 HOURS AGO
The Motley Fool

This Breakout Stock Could Be a Surprise Growth Pick in 2022

A leading private label credit card provider has made a big move into BNPL.
STOCKS・23 HOURS AGO

2 Wildly Undervalued Stocks to Buy for 2022

The top U.S. automaker and the biggest U.S. regional airline both trade at deep discounts to the broader market despite their strong prospects.
STOCKS・19 HOURS AGO
The Motley Fool

High-yielding passive income is hard to find these days. This stock should keep paying you like clockwork.
STOCKS・22 HOURS AGO
The Motley Fool

Is Palantir a 2022 Breakout Stock?

Its commercial applications are starting to shine.
MARKETS・19 HOURS AGO
The Motley Fool

These companies have at least one thing in common: leadership in industries with solid tailwinds.
STOCKS・18 HOURS AGO

Let's look beyond this company's recent performances.
STOCKS・19 HOURS AGO
The Motley Fool

One of the keys to winning in the stock market is to ignore short-term issues and volatility.
STOCKS・1 DAY AGO
The Motley Fool

There are some excellent bargains for patient long-term investors right now.
STOCKS・1 DAY AGO
The Motley Fool

How can long-term investors protect their portfolios against inflation? Here are four key traits to look for when picking stocks.
STOCKS・22 HOURS AGO
The Motley Fool

Keep an eye on this market leader.
TECHNOLOGY・19 HOURS AGO
The Motley Fool

A stock that plunges nearly 90% is inherently risky, but Wall Street is rapidly warming up to this small-cap company.
STOCKS・1 DAY AGO
The Motley Fool

Should You Invest in the Metaverse or Is This an Overhyped Buzzword to Avoid?

Corporate history is littered with promising tech ideas that never really panned out as advertised.
STOCKS・20 HOURS AGO
The Motley Fool

Is the COVID-19 Investing Boom Over?

Maybe, but some COVID-19 stocks could still move higher.
MEDICAL & BIOTECH・22 HOURS AGO