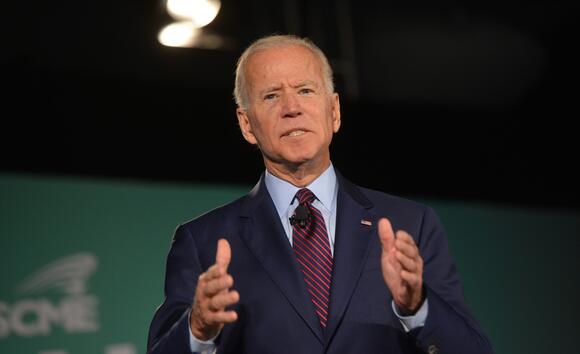 Is President Joe Biden 's approval rating getting any better?

Not so much — at least according to a Trafalgar Group poll conducted among 1,082 likely general election voters between Nov. 26 and 29. His approval rating was 36%, the survey found. That's compared to his approval score of 38% in October, according to a USA Today /Suffolk poll .

Biden's disapproval rating stood at 59%, over half of respondents.

KAMALA HARRIS ON LOW APPROVAL: 'POLLS — THEY GO UP, THEY GO DOWN'

About 7% disapproved of the president, with 52% strongly disapproving.

The party breakdown, as expected, was skewed toward Democrats favoring Biden.

Sixty-five percent of Democrats approved of him, while 31% disapproved. When it came to Republicans, a whopping 85% disapproved of the president's performance in the White House.

The poll had a margin of error of plus or minus 2.98 percentage points. The poll did not include Vice President Kamala Harris, who had a 28% approval rating in the October poll from USA Today /Suffolk.

He has lost all the backing of his voters by now,except the border people they gona keep coming as long he's in office ,I'm surprised he hadn't been assassinated

Biden his family and his administration are all criminals, drugs, human trafficking, treason, and fraud

Public confidence in President Joe Biden’s handling of major issues such as the economy has fallen off dramatically since the start of his first year, a new survey found.
PRESIDENTIAL ELECTION・20 HOURS AGO
WashingtonExaminer

House Majority Leader Steny Hoyer on Tuesday said he agrees with President Joe Biden’s assertion that the results of the midterm elections may not be legitimate to Democrats if they are unable to pass two election and voter overhaul measures.
PRESIDENTIAL ELECTION・19 HOURS AGO
WashingtonExaminer

More than half of Americans disapprove of President Joe Biden’s handling of his responsibilities in a new Pew Research Group survey published on Tuesday that found Mr Biden’s approval rating slipping further underwater.Just above four in 10 Americans, 41 per cent, gave Mr Biden positive marks in the poll while 56 per cent say the president is not doing a good job; his approval rating dropped by the same amount, 3 percentage points, by which his disapproval rating rose over the four months between the last survey released by Pew and January 25.Corresponding with that shift in Mr Biden’s...
PRESIDENTIAL ELECTION・17 HOURS AGO

The controversial remark came after Doocy asked the president if inflation will be a "political liability in the midterms."
PRESIDENTIAL ELECTION・1 DAY AGO
FOX4 News Kansas City

The 81-year-old Pelosi says in an online video that the upcoming election is crucial, and "nothing less is at stake than our democracy.”
CONGRESS & COURTS・14 HOURS AGO
Newsweek

While Republicans such as Greg Abbott and Ted Cruz have said Biden has an "open border," immigrations experts have said that is not correct.
PRESIDENTIAL ELECTION・1 DAY AGO
Newsweek

The president may have abandoned hopes of working with the GOP as he recently criticized his opponents in an address asking: "What are Republicans for?"
PRESIDENTIAL ELECTION・22 HOURS AGO
Daily Mail

Biden’s approval rating hits a dire 39% as a majority of Americans say he’s not a strong leader and don’t think he cares about them, new polls suggest

President Joe Biden's approval rating hit another grim record on Tuesday with a new poll placing him with just 39 percent of voters' support. Meanwhile a separate survey suggests the president has lost the faith of Americans who largely think he does not care about them and is a weak leader, both dire outcomes just a year after he took office.
PRESIDENTIAL ELECTION・23 HOURS AGO
Newsweek

The former president is currently leading the Florida governor by an average of 38 percentage points.
PRESIDENTIAL ELECTION・1 DAY AGO
POLITICO

The president maintained that schools can and should operate even as the pandemic continues.
POTUS・1 DAY AGO

In past years, news anchors, reporters, commentators, and late-night hosts have unabashedly gushed over Republican senators who’ve broken ranks with their party, hailing them as "mavericks" and "heroes" for casting politics aside and voting with their "conscience." However, when Democrats like Kyrsten Sinema, D-Ariz., and Joe Manchin, D-W.Va., buck...
PRESIDENTIAL ELECTION・1 DAY AGO
Fox News

Watters on 'Fox & Friends': Biden is no longer useful to Democrats and the mainstream media

"Jesse Watters Primetime" host Jesse Watters told "Fox & Friends" on Monday that Democrats and the media are "very disappointed" in President Biden. JESSE WATTERS: [Democrats] are very disappointed in Joe Biden and so is the media. You can tell the press dragged the guy over the finish line last November, and now he’s not useful anymore. He’s not useful because he’s not jamming through the Democratic agenda, and he’s not bringing in the ratings. So, he’s not profitable for the Democratic Party or for the mainstream media, so they’re kind of putting him out to pasture.
PRESIDENTIAL ELECTION・2 DAYS AGO
Washington Times

A poll released Monday finds that more than half of U.S. voters want Dr. Anthony Fauci to keep leading the government’s COVID-19 response, despite President Biden’s continued low approval ratings. The survey by the Trafalgar Group found that 53.7% of respondents from all political affiliations said they do...
PRESIDENTIAL ELECTION・1 DAY AGO
NewsRadio 740 KTRH

Senate Republicans are already taking aim at a police reform executive order that President Joe Biden is expected to sign in the coming days, warning that the order would effectively defund state and local police departments.
PRESIDENTIAL ELECTION・1 DAY AGO
Los Angeles Times

Activists warn that the failure to deliver on promises to Black voters could hurt Democrats in the midterm election.
LOS ANGELES, CA・2 DAYS AGO
The Guardian

Sanders: ‘Anti-democratic’ Republicans to blame for Biden woes, not just Manchin and Sinema