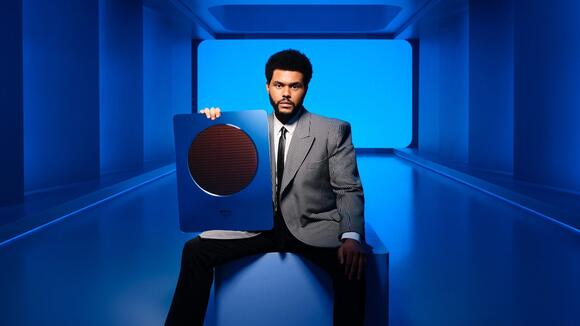 For its third annual Apple Music Awards, the streaming platform has awarded The Weeknd with one of its highest honors: Global Artist of the Year.

Of the award, the Toronto-bred crooner expressed in a statement, “I’m so grateful for this huge honour and want to thank Apple for all its support, not only for my work but also for great music by newer artists, where it matters so much for creators to be found and supported.”

With more than a million pre-adds, his fourth studio album, After Hours, became the most pre-added album of all time by a male artist on Apple Music. In its first week, it also garnered the record as the most-streamed R&B/Soul album in 73 different countries.

H.E.R. took home the award for Songwriter of the Year. In a statement, the Oscar winner shared, “I am very honored and blessed to receive this recognition. As a young Black and Filipino artist, and a woman who is on the stage giving my all, there’s no doubt that representation is important. Thank you so much, Apple Music.”

Additionally, this year the Apple Music Awards introduced the category, Regional Artist of the Year, which acknowledges “artists who made the greatest impact culturally and on the charts in their respective countries and regions.” For Africa, Wizkid was awarded this monumental feat as one of the continent’s biggest crossover artists.

Rap star Nas has begun the new year on a high note as the rapper recently announced his latest endeavor in the cryptocurrency realm, a partnership with blockchain-powered platform Royal. With the assistance of Royal, Nas will convert the streaming royalty rights to two of his songs, “Ultra Black” and “Rare,” into limited digital assets, which are extended versions of NFTs. The 48-year-old will give up 50 percent of his streaming rights for both of those songs as part of the sale, which will occur on Royal’s official website on Jan. 11 and will include a limited amount of tokens...
CELEBRITIES・10 DAYS AGO
Vibe

The Weeknd has shared more details regarding his highly anticipated album, Dawn FM. After releasing an album cover that features an elderly version of himself, as well as the cinematic trailer seen above, the Canadian pop star revealed the full tracklist for the project. Set to release his fifth studio album on Friday (Jan. 7) the singer promises fans a “new sonic universe.” The full tracklist for the project reveals 16 songs, which will feature Quincy Jones, Tyler, the Creator, Lil Wayne, Oneohtrix Point Never, and actor Jim Carrey. View this post on Instagram A post shared by The Weeknd (@theweeknd) While celebrating a...
MUSIC・12 DAYS AGO
Vibe

Roddy Ricch has been announced as the first musical guest of 2022 on Saturday Night Live, making it the West Coast rapper’s first performance on the SNL stage. Actress Ariana DeBose will also make her SNL debut as the host of the episode airing on January 15. The Compton-bred artist’s mainstream breakout single, “The Box,” was released in 2019, set Billboard chart records, and earned the 23-year-old a diamond certification from the RIAA. Prior to his 2019 debut studio album, Please Excuse Me for Being Antisocial, Roddy Ricch certified himself with his Feed Tha Streets mixtape series and the standout track “Die Young.” Roddy...
CELEBRITIES・10 DAYS AGO
hypebeast.com

The Weeknd kicked off 2022 with a bang as his fifth studio album Dawn FM has now been finally released to the public. And after teasing multiple trailers leading up to the launch day, the Toronto-born crooner has also accompanied the drop with his first visual for “Sacrifice” — track number five off of the new record.
THEATER & DANCE・10 DAYS AGO

2 Chainz Drops “Million Dollars Worth Of Game” Featuring 42 Dugg, And Cordae Releases A Freestyle Ahead Of His Upcoming Sophomore Album. As the new year kicks off, it’s only right that some of your favorite artists drop new music. With the feeling of uncertainty still on the horizon, one thing that is for certain is ESSENCE’s weekly roundup of fresh releases.
MUSIC・10 DAYS AGO
Mac Observer

Shazam has published its ‘Predictions 2022’ playlist on Apple Music. The playlist contains 50 tracks by 50 different artists, five of whom artists have been highlighted. They are Ayra Starr, DannyLux, Lyn Lapid, Sad Night Dynamite, and STAYC. You can check it all out, and maybe discover who you’re going to be listening to for the next 12 months!
MUSIC・13 DAYS AGO
hot969boston.com

If you were like Melissa and stayed up ’til midnight last night to watch The Weeknd’s listening party, you already know how brilliant of an album “Dawn FM” is. Set in the appearance of an actual radio station, Dawn FM takes you on a journey from the club, back to the 80’s and beyond. Stream it now on all platforms.
MUSIC・11 DAYS AGO
Distractify

For fans of The Weeknd, Friday, Jan. 7, 2022, marked a big day in the "XO" world. The Canadian crooner decided to release his highly-anticipated follow-up to 2020's "After Hours," titled "Dawn FM." The 16-track project is already making waves, and fans are eagerly trying to decipher all of the...
MUSIC・10 DAYS AGO

After the release of his hotly anticipated Dawn FM album, it's clear The Weeknd's penchant for dance music is more voracious than ever. The Weeknd has long championed electronic dance music, collaborating with the likes of Gesaffelstein, Daft Punk, and Disclosure, among others. However, Dawn FM twists the knife into this curiosity by presenting the most dance-forward album of his career.
MUSIC・10 DAYS AGO
Vibe

Though The Weeknd’s latest studio effort is barely a week old, he is already giving his fans more. An expanded version of Dawn FM is now available to stream plus new visuals and three new tracks including “alternate world” versions of “Take My Breath Away” and “Sacrifice.” First up, it’s the remix to “Sacrifice” featuring famed house trio, Swedish House Mafia. A notable sonic shift is the track’s percussion, which is now more parallel to that of its sampled track, Alicia Myers’ “I Want to Thank You.” Channeling the vein of classic horror films as seen in a tweet from Tuesday (Jan. 11) and...
MUSIC・5 DAYS AGO
101 WIXX

Mae Muller is starting off 2022 with “Better Days” because MTV has named her this month’s Global PUSH artist. The British singer, who teamed with Polo G and Neiked for the viral hit, was cited for her optimism and evolution as an artist. Mae, who’s 24, says she is hard at work on her new album.
CELEBRITIES・7 DAYS AGO
thesource.com

Fans have been waiting for over a year for Gunna’s new album DS4Ever and now they can’t stop listening to it. According to Apple Music, DS4Ever is the No.1 album on the their top charts. For the No.1 spot, DS4Ever had to beat out the Weekn’s Dawn FM...
MUSIC・11 DAYS AGO

Juicy J Says The Weeknd's Music Will "Heal Us"

The Weeknd's latest studio album Dawn FM seemed like a message from the Toronto singer that he prioritizes his fans above all else. With guest appearances from Tyler, The Creator, Lil Wayne, Quincy Jones and Jim Carrey, The Weeknd put together a stunning experience on Dawn FM. Prior to the...
MUSIC・8 DAYS AGO
Vibe

‘Raise the Bar’ is VIBE Hip-Hop Reporter Preezy Brown’s New Music Friday column. Each week he picks one Hip-Hop song or album that deserves your attention all weekend (but don’t worry, he’s also got a roundup of honorable mentions below). Releasing his debut album, The Lost Boy, in 2019, Cordae, who has already racked up a pair of Grammy nods for Best Rap Album and Best Rap Song, has been hailed as one of the most promising scribes of this era, by generations past and present. Initially rising to prominence alongside his former YBN brethren, Cordae chose to fly solo, leaving...
MUSIC・3 DAYS AGO
coast1045.com

The Weeknd unveils the music video for ‘Gasoline’

The Weeknd has released the official video for “Gasoline,” the second track off his most recent album, Dawn FM. Directed by Matilda Finn, the eccentric “Gasoline” video features The Weeknd portraying his character off the cover of Dawn FM—an old version of himself. The Weeknd...
CELEBRITIES・5 DAYS AGO
vinylmeplease.com

Every week, we tell you about an album we think you need to spend time with. This week’s album is The Weeknd’s Dawn FM. The idea of a “pop era” is usually ascribed to female pop stars and the worlds they build around their promotional album cycles. Take, for example, Katy Perry’s candy-coated Teenage Dream era, the tabloid frenzy of Taylor Swift’s reputation era or the pink and green apocalypse of Lady Gaga’s most recent solo album Chromatica. Though a very involved marketing ploy, these eras help to establish characters and landscapes that immerse listeners into the album’s story much deeper than a concept album, which lacks a life outside of the music itself.
MUSIC・8 DAYS AGO
NewsTimes

The Weeknd finds himself in the midst of a surreal dance floor ritual in the new video for “Sacrifice,” a track off his latest album, Dawn FM. The Cliqua-directed clip opens with a disconcertingly smooth radio DJ for “103.5 Dawn FM” waking up the Weeknd and telling him, “It’s time to walk into the light and accept your fate with open arms. Scared? Don’t worry, we’ll be there to hold your hand and guide you through this painless transition.”
MUSIC・10 DAYS AGO
dailybruin.com

In the wave of New Year’s resolutions, fresh music marches in as a soundtrack for accepting the past and ushering in new horizons. Artists are embracing the multiplicity of emotions a year can hold, with this winter’s releases welcoming honesty, pain and optimism. Read on to hear the...
MUSIC・14 DAYS AGO
hypebeast.com

J. Cole‘s full catalog of albums has been exclusively mixed for Spatial Audio with Dolby Atmos on Apple Music. Fans and subscribers of the platform can now listen to 4 Your Eyez Only, 2014 Forest Hills Drive, Born Sinners, Cole World: The Sideline Story, KOD, The Off-Season, Revenge of the Dreamers 2 and Revenge of the Dreamers 3 — all of which were mixed by engineers Juro “Mez” Davis and Kaleb “KQuick” Rollins — as an immersive listening experience on Apple Music. Those who use AirPods or Beats headphones with an H1 or W1 chip will automatically be able to listen to the Dolby Atmos tracks, as well as those using the built-in speakers of the latest versions of the iPhone, iPad and Mac.
ENTERTAINMENT・5 DAYS AGO
kpopstarz.com