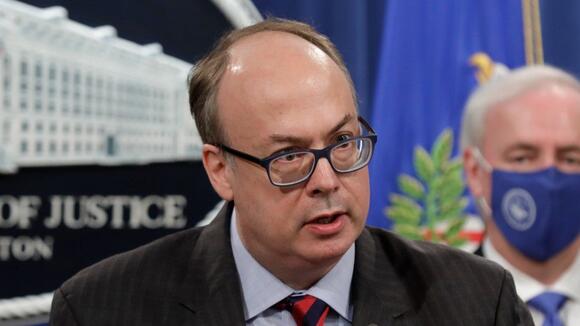 The House Rules Committee on Thursday weighed the contempt of Congress referral against Trump Department of Justice official Jeffrey Clark, who was censured Wednesday by the House committee investigating the Jan. 6 attack on the Capitol after he refused to answer their questions.

The move tees up a vote by the full House to refer Clark to the very agency where he once worked for prosecution, even as the Jan. 6 committee agreed to a last-minute request by Clark’s lawyer to reconvene a meeting where Clark can plead his Fifth Amendment right to their questions, invoking protections against self-incrimination.

“People sort of talk about the Fifth Amendment without stopping to think about what he is saying if he invokes the Fifth — that he won't answer a question because he's worried about criminal prosecution," Rep. Liz Cheney (R-Wyo.) vice chair of the Jan. 6 committee, said ahead of the hearing.

"And if you think about that in the context of questions we're asking, which have to do with his discussions with President Trump about the election. And if he feels that he can't answer those questions about discussions with Donald Trump because he's worried that he could be facing criminal prosecution, the American people deserve to know that,” Cheney added.

Clark, a mid-level attorney at the Department of Justice (DOJ), became a central figure in former President Trump’s quest to have the DOJ investigate his baseless claims of voter fraud, with Clark pushing superiors to send a letter encouraging states to delay certification of their election results.

In his opening statement, Jan. 6 committee Chair Bennie Thompson (D-Miss.) said Clark was an isolated case among the now more than 250 people that have sat down with the committee.

“Mr. Clark believes he’s protected by these sweeping claims of privilege. Executive privilege, even though the former president said he wouldn’t try to stop Mr. Clark from testifying. Attorney-client privilege, even though Mr. Clark wouldn’t say who his client is. And, as I stated last night, Mr. Clark came to us on Wednesday, through his attorney, stating that he is now claiming Fifth Amendment protection,” Thompson said during the Rules Committee meeting.

“Mr. Clark previously had the opportunity to make Fifth Amendment assertions on the record and declined. But a Fifth Amendment privilege assertion is very significant. So the Select Committee has agreed to provide him another chance to come in and assert that privilege on a question-by-question basis, which he’s required to do by law if he’s making such a claim,” he added.

Rules will formally vote on the matter after the deposition the committee has scheduled for Clark on Saturday, allowing for a quick response after the last-minute delay.

“They will hold in abeyance a decision based on what comes up Saturday, and then they can reconvene for so we would not have to come back before the committee,” Thompson said Thursday.

Republicans sought to defend Clark in the Rules hearing, arguing that the courts should resolve the issue, not Congress.

“Simply put, this contempt vote is not ripe,” he added.

House Majority Leader Steny Hoyer (D-Md.) previously said he would hold a vote this week on Clark’s censure, but the vote will now likely take place next week following the special Saturday deposition scheduled for Clark.

Clark could then face prosecution by DOJ much as it has gone after onetime White House strategist Stephen Bannon, who failed to show for his deposition. Bannon is now facing two counts of criminal contempt of Congress, which together carry up to two years in prison and $200,000 in fines.

"I think anyone with common sense would be reluctant to go talk to this committee," the GOP congressman said.
CONGRESS & COURTS・18 HOURS AGO
Newsweek

WASHINGTON, Jan 17 (Reuters) - The U.S. midterm elections are some 10 months away, but President Joe Biden's administration and allies already foresee a possible scenario in which Republicans take the House of Representatives, the Senate, or both, and launch a series of investigations and attempts to impeach the president.
PRESIDENTIAL ELECTION・3 HOURS AGO

Let’s be clear: In refusing to testify to the House select committee examining Jan. 6, House Minority Leader Kevin McCarthy may well be helping to cover up potential crimes committed by Donald Trump. The California Republican has announced that he will not cooperate with the select committee, which has...
POTUS・4 DAYS AGO
Washington Post

A few weeks ago, Jan. 6 committee member Rep. Liz Cheney (R-Wyo.) floated a specific crime she suggested President Donald Trump might have committed that day: “corruptly” obstructing or attempting to obstruct an “official proceeding” — that is, Congress’s counting of electoral votes. On...
POTUS・4 DAYS AGO
POLITICO

Opinion | What Does the DOJ’s New Jan. 6 Sedition Indictment Mean for Trump?

There are certainly dots to connect between the White House and those charged with conspiracy, but is there reason to believe the department is actually closing in on the former president?. Ankush Khardori, an attorney and former federal prosecutor, is a Politico Magazine contributing editor. The latest development in the...
POTUS・2 DAYS AGO
POLITICO

Judge mulls whether Trump’s silence on Jan. 6 could amount to ‘agreement’ with rioters

During a hearing on civil lawsuits stemming from the Capitol attack, Donald Trump’s lawyers claimed sweeping immunity for the former president.
PROTESTS・6 DAYS AGO

Former president Donald Trump lashed out Monday at Sen. Mike Rounds (S.D.), calling him a “jerk,” a day after the GOP senator said the 2020 election was “as fair as we have seen” and dismissed Trump’s widely debunked allegations of extensive voter fraud. Speaking on...
PRESIDENTIAL ELECTION・7 DAYS AGO
Reuters

WASHINGTON, Jan 9 (Reuters) - U.S. Republican Representative Jim Jordan, a close confidante of former President Donald Trump, said on Sunday he would not cooperate with a U.S. House committee investigating last year's attack on the Capitol. The panel had asked Jordan to disclose conversations he had with Trump on...
CONGRESS & COURTS・7 DAYS AGO
Reuters

Consequences for Trump over Jan. 6 up to DOJ -Psaki

White House Press Secretary Jen Psaki said President Joe Biden will leave to the Justice Department the decision on what consequences former President Donald Trump should face for his role in the January 6 attack on the Capitol.
POTUS・11 DAYS AGO

In his first op-ed since leaving office, the former president wrote about the work that must go into protecting democracy.
PRESIDENTIAL ELECTION・3 DAYS AGO
HuffingtonPost

Sen. Kyrsten Sinema (D-Ariz.) took to the Senate floor on Thursday to tell her fellow Democrats that she would not support changing the chamber’s filibuster rules in order to pass voting rights legislation. “There is no need for me to restate my position,” Sinema said, as she explained she...
PRESIDENTIAL ELECTION・3 DAYS AGO
Business Insider

"Things are not going well," Romney said Sunday of President Joe Biden's tenure. "And the president needs to stop and reset."
PRESIDENTIAL ELECTION・17 HOURS AGO
The Guardian

The MyPillow founder made the remarks at Trump's Arizona rally, where many speakers touted conspiracy theories about the 2020 election.
PRESIDENTIAL ELECTION・21 HOURS AGO
mediaite.com

CNN anchor Kate Bolduan pulled no punches after House Minority Leader Kevin McCarthy was grilled about the Jan. 6 committee at a press conference, exclaiming “HE WAS LYING!”. Seconds after McCarthy exited his weekly press conference after enduring a contentious grilling about the House Select Committee Investigating the Jan....
CONGRESS & COURTS・3 DAYS AGO