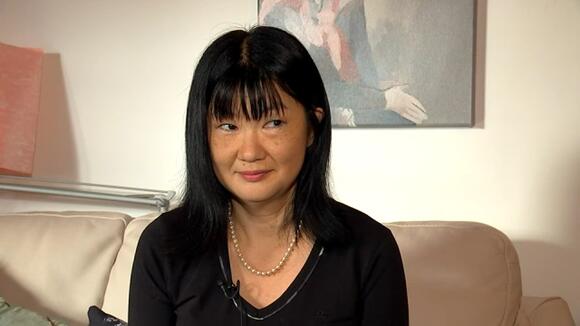 The NYPD's Hate Crimes Task Force is investigating after a woman reported that a man hit her with a bicycle and then made anti-Asian slurs towards her. Atsuko Obando, 54, was on her way to work as a nurse and had just gotten off of a 1 subway train at the 116th Street-Columbia University station around 6:30 p.m. Sunday when the suspect slammed into her from behind with his bicycle. "I was scared because he was a tall guy," Obando said. "He laughed and said, happily, I got you good you Asian ******* *****." Obando says the suspect continued to taunt her as she walked away from him. The 54-year-old said as much as her back hurt, the attacker's dismissive attitude was just as painful. "I sensed his entitlement, as if he had some kind of divine right to hurt another human being," Obando said. Obando was able to walk to the emergency room, but she has been unable to work since. She says she isn't a vindictive person, but says picking out the suspect's photo for investigators sends a message. "I will be satisfied that he sees his own face and poster and he knows that I didn't just go away and he couldn't dismiss me," Obando said. Police announced later Thursday evening that 46-year-old Raymond Bennet was arrested on charges of assault as a hate crime and criminal possession of a weapon. ALSO READ | President Biden to make at-home rapid tests free in new COVID plan

Rawleigh Thompson was heading to church on Sunday when a man pushed him from behind onto the subway tracks at the Fulton Street Station, directly in front of an oncoming train.
NEW YORK CITY, NY・11 HOURS AGO
ABCNY

Police say the driver was parked in the Westchester Square section when someone walked up to his vehicle and shot him in the leg.
BRONX, NY・5 HOURS AGO
ABCNY

Duane Costa, of from Long Island, was sentenced to 25 years to life in prison Thursday for opening fire on four police officers in Nassau County.
NASSAU COUNTY, NY・1 DAY AGO

Three teenagers are now facing murder charges in New Jersey for the death of 18-year-old Robert Cuadra, an honor student who was just months away from attending his dream university on a full scholarship.
PATERSON, NJ・8 HOURS AGO
ABCNY

Detectives believe the victim was shot by a person in the other vehicle, which then fled the scene.
BRONX, NY・2 DAYS AGO

A mother and her new son reunited Wednesday with a Suffolk County police officer who, with the help of a paramedic, helped deliver and save the baby born on Christmas Eve.
SUFFOLK COUNTY, NY・2 DAYS AGO
ABCNY

Hundreds of people came to the 32 Precinct on Wednesday night, packing 135th Street in Harlem and standing in the cold, to share the burden for a moment, of a pain that will last a lifetime.
NEW YORK CITY, NY・2 DAYS AGO