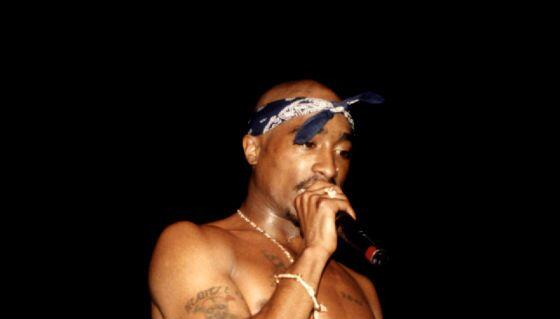 Even after 25 years since his tragic murder, West Coast rap legend Tupac Shakur is still a very sought-after figure in the public eye.

One lucky bidder will soon get the opportunity to obtain some never-before-seen photos and even music from 2Pac now that a hard-drive belonging to his former bodyguard is set to hit the auction block.

According to TMZ , an 83 GB drive belonging to the “Keep Ya Head Up” emcee’s ex-bodyguard, Frank Alexander, is currently listed on bidding website GottaHaveRockandRoll.com. While the minimum bid is set at $10,000, the site has an estimated selling price of $600,000 – $1,200,000. At the moment, there are zero bids with nine days left in the auction.

Take a look below at what the auction describes as a potential gem on the hard drive that could be huge for Pac fans and hip-hop heads alike, via Gotta Have Rock and Roll :

“Some of the highlights on the hard drive include a 35 second clip from a never released song — which is incredibly rare in Tupac’s recording history. The photos and videos bring you right into Tupac’s life in the mid to late 90’s and are some of the most intimate media that exists of him. Each file in this archive has been hand picked by Alexander himself, and included in our photographs above is Alexander’s work experience and resume. Frank Alexander was of course with Tupac the night he died, and was a key witness in the shooting. There are few people who could better document the life of Rap’s biggest star.”

As many may know by now, Frank Alexander was one of 2Pac’s most trusted affiliates and was even there on the night he was shot and killed in Las Vegas on September 7, 1996. Sadly, Alexander died back in 2013 due to a possible suicide or gun accident.

You can monitor the rare 2Pac hard-drive auction over on GottaHaveRockandRoll.com, which will donate 10% of the winning proceeds to the Tupac Amaru Shakur Foundation.

Condolences are pouring in on social media for CPO Boss Hog, a former Death Row Records artist widely known for his contributions to the 1996 Tupac Shakur single “Picture Me Rollin” from the All Eyez On Me album. On Thursday (January 13), Compton’s Most Wanted rapper Tha Chill confirmed his passing with an Instagram post and in a text message to HipHopDX.
CELEBRITIES・7 DAYS AGO
Rolling Stone

Young Dolph’s record label, Paper Route Empire, is prepping an album-length tribute to the revered Memphis rapper, Paper Route EMPIRE Presents: Long Live Dolph, set to arrive Jan. 21. Accompanying the announcement is the compilation’s titular first single, “Long Live Dolph,” helmed by Jay Fizzle. The track pairs a mournful piano loop and a stirring vocal breakdown with Jay Fizzle’s raw, heartbroken verses about his late friend and peer: “I fuck up plenty times, but you ain’t never threaten to cut me off/Always had my back and everybody know I wanted to be like Dolph/The way I talk, the way I...
MEMPHIS, TN・11 DAYS AGO
Vibe

The Weeknd Breaks This Billboard Global 200 Record With ‘Dawn FM’

And just like that, The Weeknd breaks the record for the most songs charting in a single week by a male solo artist on Billboard’s Global 200 chart. The Toronto-bred crooner had 24 songs charts simultaneously as of Wednesday (Jan. 19). His fifth studio album, Dawn FM, became an international success as it topped the charts in the U.K., Australia, Ireland, Switzerland, Sweden, and his home country, Canada. From the 16-track LP, “Sacrifice” charted at No. 2, while “Gasoline,” “Out of Time,” “Is There Someone Else?” and “How Do I Make You Love Me?” trailed behind one another. Currently, the artist who has...
MUSIC・1 DAY AGO
97.9 The Box

Prayers going out to his friends, family and inner circle during this difficult time.
HOUSTON, TX・16 DAYS AGO

Born Vincent Cohan, California rapper and frequent YG collaborator Slim 400 was laid to rest on Tuesday, January 18. After surviving being shot 9 times in 2018, he was murdered in December of 2021, adding to the long list of artists whose lives were cut short by gunfire. Born June 21, 1987, Slim 400 was 33 years old when his life was taken. The BompTTon rapper's memorial service was attended by family and affiliates, some of which include the previously mentioned YG, another California native.
CELEBRITIES・1 DAY AGO
djmag.com

A solar powered statue of LL Cool J is on display in New York. Currently installed at Flushing Meadows Corona Park in Queens, the Bronze bust of the Bay Shore rapper is the work of artist Sherwin Banfield, who called it a “labor of love”. The statue —...
MUSIC・14 DAYS AGO
97.9 The Box

We are only a couple of weeks into the new year and the internet is already interneting. Nelly says that a woman’s claims about returning luggage filled with money to him are false. As spotted on Complex the St. Louis, Missouri native has no idea what an unidentified woman is talking about on social media. Last […]
CELEBRITIES・9 DAYS AGO
HipHopDX.com

Sayings such as “Viral” and “Movie” are a staple of Fivio Foreign’s vocabulary. A clip from Trinidad James’ Drink Champs interview recently resurfaced where he claims he was the originator of bringing the word “viral” into the Hip Hop culture, but the Brooklyn drill rapper vehemently disagreed.
HIP HOP・1 DAY AGO

HipHopDX Rising Stars alumnus BLEU has wholeheartedly embraced the cost of living like a boss. In a quick Instagram story post on Thursday (January 21), BLEU revealed exactly how much a year he spends on private security, explaining his belief it helps him lead a low-maintenance lifestyle. “100k a year...
CELEBRITIES・13 HOURS AGO
MetroTimes

If you ask almost any millennial Detroiter to “hit the Blade dance,” it’s almost guaranteed that they will enthusiastically bend both their arms, raise two fists, and bring it back down in one shaking, rhythmic motion. If you speak Detroit, you know the dance and you know...
DETROIT, MI・14 HOURS AGO
Los Angeles Times

Remble is L.A.'s next big hip-hop star. He never wanted it to happen like this

Remble stood poised to become one of 2022's breakout stars. Then his mentor, Drakeo the Ruler, was killed. Remble's talent is undeniable. So is his loss.
LOS ANGELES, CA・1 DAY AGO

Wack 100 has colorful opinions on anything and everything, but when he called Master P “broke” in a recent Clubhouse conversation, he faced more than one person who disagreed. After all, the No Limit Records CEO is a self-made millionaire with the portfolio to prove it. On Friday (January 21), Master P appeared to address Wack 100’s comments, which included “he don’t have 20 percent of Nick Cannon’s net worth.”
CELEBRITIES・10 HOURS AGO
97.9 The Box

New health updates on Wendy Williams seem to be more conflicting than ever, with many outlets saying the beloved talk show host is seriously down bad in terms of health while those in her inner circle are brushing off the negative press as nothing other than speculation.
CELEBRITIES・2 DAYS AGO
97.9 The Box

Join Silk Sonic in Las Vegas for their 13-show residency instead of "smokin out the window." From February 25 thru April 2, Bruno Mars and Anderson .Paak are inviting you to "the sexiest party of the year!"
LAS VEGAS, NV・2 DAYS AGO
97.9 The Box

LOS ANGELES, CA (CelebrityAccess) – Tupac Shakur’s sister, Sekyiwa Shakur filed a lawsuit on Monday alleging Tom Whalley has embezzled millions, per Billboard. Whalley was named executor of Tupac’s estate in 2016 after the death of their mother, Afeni Shakur-Davis. In the lawsuit, Sekyiwa claims Whalley has...
CELEBRITIES・9 DAYS AGO
97.9 The Box

The cause of death remains unknown, and many of Sad Frosty's peers took to Twitter to mourn him.
HOUSTON, TX・3 DAYS AGO
97.9 The Box

Hip-hop icon Pete Rock made headlines recently after it was reported that he's planning to hit fellow rap god Nas with a lawsuit over unpaid royalties on the standout 'Illmatic' album single "The World Is Yours."
CELEBRITIES・8 DAYS AGO
shefinds

Miley Cyrus Wore The Most Risqué Green Dress In Miami—It’s SO Revealing!

Miley Cyrus is a frequent fashion risk-taker, and her wild outfits never fail to catch our eye. As one of her edgy ensembles for her televised New Year’s Eve party with Pete Davidson, Cyrus rocked a one-shoulder, sparkly green gown. It showed a lot of her glowing skin and toned figure!
BEAUTY & FASHION・9 DAYS AGO