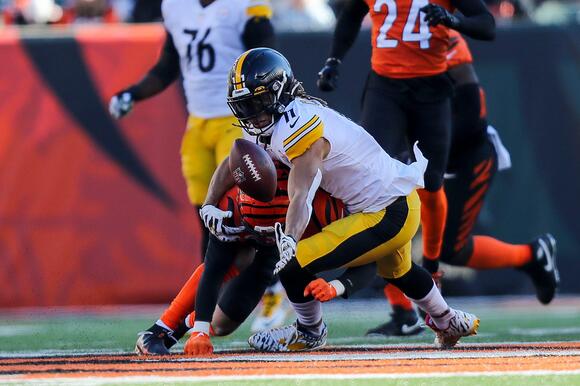 It’s a tantalizing narrative that’s too easy to resist: Chase Claypool’s request for the Steelers to play music during practice is indicative of the storied organization’s downfall. The wideout’s remark prompted widespread outrage among former Steelers players and even caused Stephen A. Smith to call the Steelers a “ national embarrassment .”

Make no mistake: Claypool suggesting playing music to make practice “a little bit more fun” on the heels of a three-game winless streak is indicative of a locker room that’s lost its way. Mike Tomlin shot down Claypool’s request Tuesday, saying the second-year player “plays wideout and I’ll let him do that.” Veteran Cam Heyward doesn’t want to entertain Claypool’s childish request, either.

“I hope he was kidding because as soon as he said it, I was literally about to rip the speaker out,” Heyward said.

All of this music talk prompted Ben Roethlisberger to explain why the team prohibits tunes in the locker room. The policy was put in place while Dan Rooney was still alive, so players would be able to pay attention if the late owner came down to chat with them.

“I had a conversation with guys like Cam Heyward and Vince Williams and told them, ‘The reason that we don’t do it is because I always wanted if Mr. Rooney came in the locker room, you want to listen to him,” Roethlisberger said. “You want to hear the things he had to say, whether it was about Steelers, about life, just about whatever.”

Mr. Rooney wouldn’t recognize his Steelers anymore, but it’s not because some younger players want to jam out while running practice routes. The Steelers are 5-5-1 and heading towards their first losing season under Tomlin because the defense is soft and Roethlisberger is washed up. On Sunday, Big Ben threw two interceptions, including a pick-six, and posted a QB rating of 65.4. The team’s no-music policy doesn’t seem to be helping his play at all.

It also doesn’t appear to be helping the defense buckle down. Despite employing T.J. Watt and Heyward — two of the best linemen in football — Joe Mixon ran for 165 yards and two scores in Cincinnati’s 41-10 win. Devin Bush can’t make a tackle, with or without music being played.

Ultimately, the music issues distracts from the Steelers’ structural problems. Despite a few individual standouts, this isn’t a talented roster on either side of the ball, and especially on offense. Entering the season, Pro Football Focus ranked the Steelers’ offensive line 31st in the league. They’ve played down to their billing, too. The Steelers possess the fifth-worst running attack in the league, even with first round pick Najee Harris.

Roethlisberger, meanwhile, gets rid of the ball faster than any other QB and throws it shorter distances than almost any other passer. He’s ranked 34th in the league’s PFF rating system.

When defending the music ban, Roethlisberger called himself the old and “grumpy guy.” Unfortunately, those descriptions also apply to his play. Everybody, including Claypool, would be having more fun if Roethlisberger was still good enough to win.

For 18 seasons, Ben Roethlisberger has been the face of the Pittsburgh Steelers’ franchise. He’s earned two Super Bowl titles
NFL・2 DAYS AGO
93.7 The Fan

Ben Roethlisberger’s NFL career came to a close on Sunday night with the Steelers’ 42-21 loss to the Chiefs. The Steelers started out the game strong (at least defensively) before giving up 21 points in the final six minutes of the second quarter. With how the Steelers offense...
NFL・2 DAYS AGO
Sportsnaut

The 2021 NFL regular season is over and playoffs are in full swing, which brings us to one of our
NFL・4 HOURS AGO

Ben Roethlisberger is officially done as the quarterback of the Pittsburgh Steelers, which means the franchise will be heading into a brand new era after 18 years. It’s widely expected they will either trade or draft another QB in the offseason to replace Big Ben. However, wide receiver Diontae...
NFL・1 DAY AGO
USA TODAY

Chiefs, Patrick Mahomes crush Steelers in what may be Ben Roethlisberger's final game

The Chiefs now advance to the divisional round, where they will host the Buffalo Bills next Sunday.
NFL・2 DAYS AGO
AllSteelers

PITTSBURGH -- Joe Hade might have played his final game with the Pittsburgh Steelers after spending the last five years in black and gold. The 32-year-old cornerback is expected to hit the free agent market with uncertainty whether or not the Steelers will make him another offer. Haden posted on...
NFL・2 DAYS AGO

The Pittsburgh Steelers have plenty of ways to replace Ben Roethlisberger. Here’s how they can do so via trade, signing and draft. The Pittsburgh Steelers somehow, someway made it to the playoffs this season. That gave quarterback Ben Roethlisberger a chance to potentially go out on top with a run to a Super Bowl victory. That did not happen.
NFL・2 DAYS AGO
93.7 The Fan

No endorsement for Rudolph, Haskins from Tomlin

Speaking during his final press conference of the year, Tomlin said that “all options are on the table” when it comes to the quarterback position. He added they are moving forward assuming Ben Roethlisberger will officially retire.
NFL・1 DAY AGO
102.5 WDVE

The Western PA native and Steelers fan has a major request for her 'favorite Steeler.'
NFL・1 DAY AGO

The Pittsburgh Steelers have known who their quarterback was for most of the past 18 seasons. But with Ben Roethlisberger
NFL・1 DAY AGO
Steelers Depot

The Pittsburgh Steelers got pummeled by the Kansas City Chiefs Sunday night, losing the game 42-21 in a laugher. Much like the Week 16 matchup, the offense failed to get anything going early in the game, only seeing success after the Chiefs built up a big league into the second half, allowing Pittsburgh to get small chucks of yardage while defending the big play. This isn’t to say that Pittsburgh didn’t take their shots downfield, but rather that they failed to connect to make an explosive play.
NFL・1 DAY AGO
93.7 The Fan

The Steelers have signed 12 players to Reserve/Future contracts Tuesday. Those players all spent time on the Steelers’ practice squad this past season.
1 DAY AGO
93.7 The Fan

The Steelers have signed Chartiers Valley grad Christian Kuntz to a one-year deal on Wednesday. Kuntz was the Steelers long snapper all season after spending 2020 on the practice squad.
NFL・1 HOUR AGO
93.7 The Fan

Haskins says Steelers are giving him shot to be starter

He looked good in exhibition games, now saying he improved without playing a regular-season snap, Dwayne Haskins gets chance to be Steelers starting QB
NFL・4 HOURS AGO
Sportsnaut

Mason Rudolph likely to be Pittsburgh Steelers starting QB in 2022

Ever since being selected in the third round of the 2018 NFL Draft, Mason Rudolph has waited in the wings
NFL・1 DAY AGO
On3.com

No one will question that retiring quarterback Ben Roethlisberger was a tough player. He played through a plethora of injuries over 18 years, seen in boots, ice packs, casts and more.
NFL・5 HOURS AGO