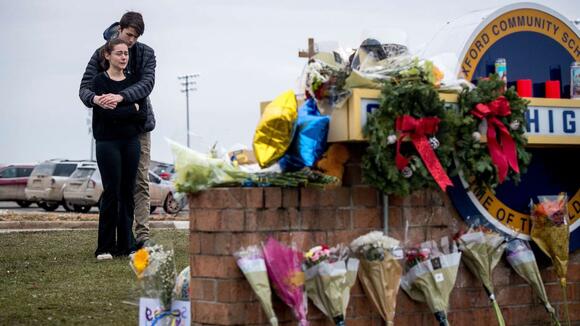 In the wake of Tuesday's deadly school shooting at Oxford High School in Michigan , a 17-year-old boy has been arrested for bringing a loaded gun to a nearby school.

The teen was arrested for carrying a concealed weapon on Wednesday at Southfield Regional Academic Campus, about 30 miles south of Oxford High School, after a classmate tipped off the principal, said Jeff Jagielski, a spokesperson for the Southfield Police Department.

The principal alerted a school resource officer, who found the gun, loaded with three rounds, in the student's coat pocket, Jagielski said.

Southfield Police Chief Elvin Barren said the student is believed to have been bringing the Bersa Thunder 380 pistol to school for "several weeks," but insisted the student did not pose a threat to classmates or staff.

"There was no indication that there was any type of copycat situation or any type of threats to the school, but rather a poor decision by this young man to not only carry a weapon but to carry a weapon onto school property," Barren said.

The student allegedly told police he found the weapon "down the street" in some bushes, Jagielski said. Police ran the gun's serial number, which did not yield anything, leading authorities to believe the weapon was stolen.

A few months ago, the student was suspended after an argument with two classmates boiled over and he allegedly threatened to shoot them, officials said, though the teen was not arrested.

Police have turned the case over to the Oakland County Prosecutor's Office.

Other nearby schools have announced closures due to threats following Tuesday's shooting at Oxford High School, in which four were killed and seven were injured.

Officials in Holly, about 25 miles from Oxford, announced that Holly Area Schools would close on Thursday and Friday.

At the end of the school day Wednesday, Holly's "district administration received multiple reports of a potential shooting threat against Holly Area schools that had been posted on social media," Superintendent Scott Roper and Chief of Police Jerry Narsh said in a joint statement.

"The police department has interviewed a number of students who have shared these posts. The investigation has produced no source for the original threat, but instead several second- and third-hand reports from individuals sharing what they heard others say," the officials said.

MORE: Michigan school shooting: What we know about the victims

The threat wasn't considered credible due to a lack of evidence, they said, "but given the extraordinary circumstances, we would like to take the next two days to ask our community to please share any information regarding any threats with school administration or the Holly police department at (248) 858-4911."

The West Bloomfield School District, about 25 miles from Oxford, said on its website: "Due to the serious nature of social media threats related to school shootings across Oakland County, the West Bloomfield School District will be closed PreK - 12, this Thursday, December 2, and Friday, December 3, 2021. ... All school-related events and activities are also canceled."

The suspected Oxford High School gunman, 15-year-old Ethan Crumbley, was charged as an adult. Crumbley has been charged with one count of terrorism causing death; four counts of first-degree murder; seven counts of assault with intent to murder; and 11 counts of possession of a firearm in commission of a felony, Oakland County Prosecutor Karen McDonald said. Additional charges are possible, she said.

The night before Tuesday's shooting, an undetermined number of students were said to have seen a video online warning of a shooting, a law enforcement official told ABC News.

Some students who saw the video stayed home from school, though no calls were placed to police regarding the video, the official said.

During Crumbley's first court appearance on Wednesday, Oakland County Sheriff's Lt. Tim Willis confirmed that videos were recovered from the suspect's phone. Willis said they included one video by Crumbley the night before the shooting, in which he allegedly "talked about shooting and killing students the next day at Oxford High School."

Investigators said they also recovered a journal from Crumbley's backpack that allegedly detailed a desire to kill students.

According to the sheriff's office, "The suspect had been involved in a meeting over behavior issues the prior day and the day of the shooting."

"Nothing of concern was noted in his school file prior to the first meeting," the sheriff's office said. "There are also no documented cases of bullying of the suspect with the school."

The Oxford Community Schools District said in a statement, "The result of the horrific attack at Oxford High School is four young lives lost and injury to six other students and one staff member. While this is a cost no community should bear the long-term impacts of this event cannot be comprehended."

"The response by our students, staff and first responders was heroic and undoubtedly saved lives," the district said. "Oxford Schools is fully participating in the ongoing Oakland County Sheriff’s Office investigation."

A judge entered a not guilty plea for Crumbley on Wednesday. His next court appearance is scheduled for Dec. 13.

ABC News' Will McDuffie contributed to this report.

KYIV, Jan 19 (Reuters) - U.S. Secretary of State Antony Blinken said on Wednesday that Russia could launch a new attack on Ukraine at "very short notice" but Washington would pursue diplomacy as long as it could, even though it was unsure what Moscow really wanted. On a visit to...
POLITICS・21 MINUTES AGO
NBC News

Washington (CNN) — The House committee investigating the January 6 attack on the US Capitol has subpoenaed and obtained records of phone numbers associated with one of former President Donald Trump's children, Eric Trump, as well as Kimberly Guilfoyle, who is engaged to Donald Trump Jr., sources tell CNN.
U.S. POLITICS・17 HOURS AGO
ABC News

Democrats will seek a carveout to the filibuster rule to pass voting rights legislation by replacing the current 60-vote threshold needed to break a filibuster.
CONGRESS & COURTS・21 MINUTES AGO

(CNN) — The new government website where people can order free Covid-19 at-home rapid antigen tests is up and running. With just names and addresses, families can go to COVIDtests.gov and request up to four free tests to be delivered to their homes. The website comes online as the...
POTUS・5 HOURS AGO
The Associated Press

U. of Michigan reaches $490M settlement over sexual abuse

The University of Michigan has agreed to a $490 million settlement with more than 1,000 people who say they were sexually assaulted by a former sports doctor at the school during his nearly four-decade career, those involved in the agreement said Wednesday. Attorney Parker Stinar said that 1,050 people will...
MICHIGAN STATE・1 HOUR AGO
The Associated Press

Major airlines cancel, change flights to US over 5G dispute

DUBAI, United Arab Emirates (AP) — Major international airlines canceled flights heading to the U.S. or changed the planes they’re using Wednesday, the latest complication in a dispute over concerns that 5G mobile phone service could interfere with aircraft technology. Some airlines said they were warned that the...
AEROSPACE & DEFENSE・4 HOURS AGO
CNN

Washington (CNN) — The Biden administration will make 400 million N95 masks available to Americans for free starting next week, a White House official told CNN, the latest federal step aimed at reining in the US' Covid-19 surge. The masks -- which are coming from the Strategic National Stockpile...
POTUS・6 HOURS AGO

SYDNEY (AP) — Three of Tonga’s smaller islands suffered serious damage from tsunami waves, officials and the Red Cross said Wednesday, as a wider picture begins to emerge of the destruction caused by the eruption of an undersea volcano near the Pacific archipelago nation. Communications have been down...
ENVIRONMENT・4 HOURS AGO
CBS News

André Leon Talley, the towering former creative director and editor at large of Vogue magazine, has died. He was 73. Taley's death was confirmed on his Instagram account. The cause of death was not provided. Talley's literary agent David Vigliano confirmed Talley's death to USA Today. The Instagram post...
BEAUTY & FASHION・4 HOURS AGO