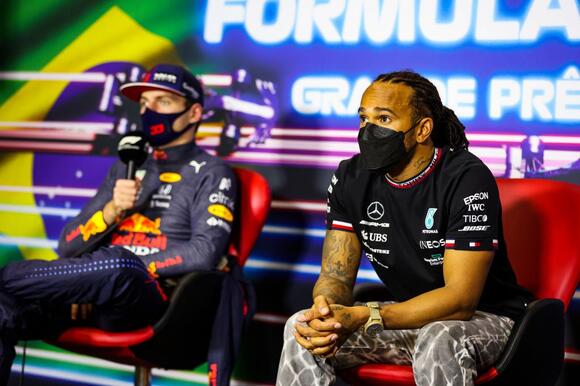 The Formula One title might not just be dictated by the two in the running to claim victory overall, but by their team-mates, Martin Brundle says.

Lewis Hamilton and Max Verstappen are fighting it out for supremacy at the top of the standings, the Dutchman leading by eight points with two races to go in Saudi Arabia and Abu Dhabi.

But how well their partners perform - and directly manage to hold off the No1 racers - is going to have a telling impact, according to Brundle, who backs Mercedes man Valtteri Bottas to fare better than Red Bull’s Sergio Perez .

“So I think that might just play into the title. One of these last two races, it’s just possible Valtteri will take some points of Max somewhere.

“And I don’t see Sergio taking points off Lewis.”

Hamilton has closed the gap thanks to back-to-back wins in Brazil and Qatar and victory in the last two would leave him top of the pile for an eighth championship. But there’s also a battle ongoing between the two teams for the constructor title, with Mercedes edging that race entirely.

Again, the factor of how Bottas and Perez perform will be pivotal to the outcome of that title fight, says Brundle - and although he feels Bottas could be key for Hamilton ultimately triumphing, it’s the Dutch driver for Red Bull who he thinks has been the top performer all season long.

“There are 88 points on the table still for the constructors - so another one that could go either way. It just depends on I don’t know, if the Mercedes really flies and Valtteri has one of his on days like in Istanbul, for example, or the sprint race in Brazil.

“It kind of feels like, season-long, Max has had the best season so far, if you look at the numbers.

“I think either of them deserve it, but it just feels as if it’s been Max’s to lose, through bad luck or bad judgment or whatever. That’s how the season feels to me.”

If this Lewis Hamilton F1 trend holds true once again, Tom Brady could be looking at yet another Super Bowl title next month. Tom Brady and his Tampa Bay Buccaneers are attempting to become the first repeat Super Bowl champions since Brady and his New England Patriots won both Super Bowl XXXVIII and Super Bowl XXXIX to cap off the 2003 and 2004 seasons.
MOTORSPORTS・1 DAY AGO
The Independent

When does 2022 F1 season start and what are the new rule changes?

The Formula 1 season may have only ended last month but fans are already clamouring for more action after the dramatic end which saw Max Verstappen take the crown.Lewis Hamilton headed into the final race on the same points as Verstappen and so the title was going to be handed to whoever finished higher. British driver Hamilton looked certain to take a record eighth world championship as he led the majority of the race in Abu Dhabi. However, a safety car was sent out after Nicholas Latifi crashed with less then 10 laps to go. Verstappen pitted with Hamilton...
MOTORSPORTS・11 HOURS AGO
firstsportz.com

According to ex-Formula 1 racer Perry McCarthy, Mercedes rookie George Russel will be the number 1 driver for the Brackley-based team. Moreover, he will be taking over the reins from 7-time world champion and teammate Lewis Hamilton and might be his ultimate challenger in the upcoming 2022 season. George Russel...
MERCEDES, TX・18 HOURS AGO
The Independent

Max Verstappen poked fun at the controversial end to the 2021 Formula 1 season with a joke at the expense of Mercedes boss Toto Wolff.Verstappen beat Lewis Hamilton at the Abu Dhabi Grand Prix to secure his maiden world title, afforded the opportunity by the intervention of race director Michael Masi.Masi seemingly went against precedent to allow cars to unlap themselves and clear the way for the Dutchman’s final lap pass of Hamilton in the Mercedes, despite the protests of Wolff on race radio.With the 2022 F1 season due to begin in March, Verstappen has been tuning up in...
MOTORSPORTS・18 HOURS AGO

Mercedes have celebrated the anniversary of Lewis Hamilton’s joining of the team as speculation continues over the British driver’s Formula 1 future.It is now nine years since Hamilton swapped McLaren for the German-based team, a period that has seen the 37-year-old win six world titles to draw level with Michael Schumacher as the most successful driver in F1 history.Hamilton is now said to be mulling over whether to remain on the grid in 2022 after being left disappointed by a controversial end to the 2021 season that saw Max Verstappen snatch Drivers’ Championship victory at the last in Abu Dhabi.While...
MOTORSPORTS・12 HOURS AGO
firstsportz.com

The 2021 F1 season saw Red Bull Max Verstappen and Mercedes’s Lewis Hamilton engaging in a intense, dramatic and controversial dual for the drivers championship where the former was successful in dethroning the latter putting an end to the years of domination Lewis Hamilton and team Mercedes had in the hybrid car era.
MOTORSPORTS・2 DAYS AGO
The Independent

Martin Brundle fears that race director Michael Masi could be made a “sacrificial lamb” for his role in the controversial conclusion to the Abu Dhabi Grand Prix.Masi’s decision to let cars between Max Verstappen and Lewis Hamilton unlap themselves, teeing up a final-lap duel between the title rivals, has been heavily criticised.The FIA are investigating the events that allowed Verstappen to snatch his first Formula 1 world title in Abu Dhabi.Mercedes were left furious by Masi’s late-race ruling, believing it went against precedent and was unfair on Hamilton, who had seemed poised to secure a record-setting eighth Drivers’ Championship.Former F1...
MOTORSPORTS・16 HOURS AGO
Financial World

Ahead of 2022 Formula One season opener that will kickstart in Bahrain on 20 March, F1’s official YouTube channel totals a record 4 billion views to-date with seven-time Grand Prix Champion Lewis Hamilton’s December defeat in Abu Dhabi breaching a whopping 16 million views in less than a month, data on social media analytics Social Blade had unveiled late on Sunday.
MOTORSPORTS・18 HOURS AGO

F1 Pundit and Commentator Karun Chandok drew a lot of flak on Twitter for his change of stance for the Lewis Hamilton-Max Verstappen collisions. The Indian Former Formula One driver had shared a tweet regarding an incident in the Formula Regional Asian Championship. Karun Chandok shared “Utter stupidity but also...
MOTORSPORTS・13 HOURS AGO
racingnews365.com

All the circuits Hamilton has won at during his F1 career