Shares of General Motors (NYSE: GM) were moving higher on Thursday, after the company's chief financial officer told analysts that GM now expects its full-year operating profit to come in above its previous guidance.

In a presentation at a Credit Suisse event for analysts on Wednesday, GM CFO Paul Jacobson boosted the company's full-year guidance for adjusted earnings before interest and tax, or "EBIT-adjusted" in GM's lingo.

"I'm pleased to say that we've experienced a little bit of favorability on costs and volumes [that] have been trending higher than we expected them to be, primarily on chip availability just from what we've seen just a few weeks ago," Jacobson said. "And consequently, our fourth quarter is coming in stronger than where we expected to be just a month ago.

"And we now see our full year EBIT adjusted in the sort of $14 billion-ish range, higher than our previous outlook of the high end of our $11.5 billion to $13.5 billion range," he said.

That's clearly good news for GM investors , and that's why the stock was higher on Thursday morning. 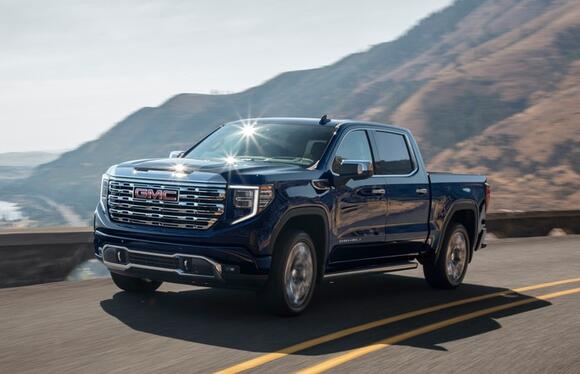 Amid 2021's supply chain disruptions, GM has prioritized production of its high-profit trucks. Demand has been strong, and GM's bottom line is seeing the benefits. Image source: General Motors.

Yesterday wasn't the first time that GM boosted its full-year guidance for EBIT-adjusted in 2021:

Now it's expecting even more, thanks to good cost controls and continued strong demand for its high-profit trucks and SUVs.

10 stocks we like better than General Motors
When our award-winning analyst team has a stock tip, it can pay to listen. After all, the newsletter they have run for over a decade, Motley Fool Stock Advisor , has tripled the market.*

They just revealed what they believe are the ten best stocks for investors to buy right now... and General Motors wasn't one of them! That's right -- they think these 10 stocks are even better buys.

A major investor in the electric vehicle maker looks to be selling its stake.
STOCKS・23 HOURS AGO
The Motley Fool

A rival's struggles could signal trouble for the entertainment giant.
STOCKS・18 HOURS AGO
The Motley Fool

It wasn't all about the streaming company.
STOCKS・21 HOURS AGO
The Motley Fool

You don't need a mountain of money to build wealth on Wall Street.
STOCKS・1 DAY AGO

Both of these businesses should benefit from industrywide tailwinds in the coming years.
STOCKS・4 HOURS AGO
WKBW 7 News Buffalo

GM said the investment will be used to renovate the facility, and purchase and install new machinery and equipment used in the production of the stator module which is a key component of an electric motor.
LOCKPORT, NY・1 DAY AGO
The Motley Fool

After a volatile trading, the Trump-affiliated stocks ended the week on a down note.
STOCKS・17 HOURS AGO
MarketWatch

Deutsche Bank just cut its price target. Then again, the bank cut a bunch of price targets.
STOCKS・18 HOURS AGO
The Motley Fool

Why Alibaba Stock Was Gaining Today

Shares of the tech giant gained amid a broader rotation.
STOCKS・1 DAY AGO
The Motley Fool

Why Salesforce.com Stock Slipped on Friday

An analyst price target cut pushed the CRM specialist down on the day.
STOCKS・18 HOURS AGO
The Motley Fool

The tech stock is still down roughly 78% from its high.
STOCKS・1 DAY AGO
The Motley Fool

It's not too late to get in on these market-beating companies.
STOCKS・1 HOUR AGO
The Motley Fool

The recent tech sell-off has made these stocks attractive picks for 2022.
STOCKS・5 HOURS AGO
The Motley Fool

Looking for a healthcare stock that will pay you to own it? Here are three suggestions.
STOCKS・18 HOURS AGO
The Motley Fool

The growth stock sell-off is intensifying.
STOCKS・1 DAY AGO
The Motley Fool

These three stocks, which trade for less than $100 a share, have businesses with stable growth and offer above-average dividends.
STOCKS・6 HOURS AGO
The Motley Fool

Why Ford Stock Is Down Today

It's about Rivian and accounting, it's a little complicated, and it's kind of silly.
STOCKS・2 DAYS AGO
The Motley Fool

There could be some major tailwinds for the big bank this year.
STOCKS・4 HOURS AGO
The Motley Fool

Down years are few and far between with these moneymaking stocks.
STOCKS・6 HOURS AGO