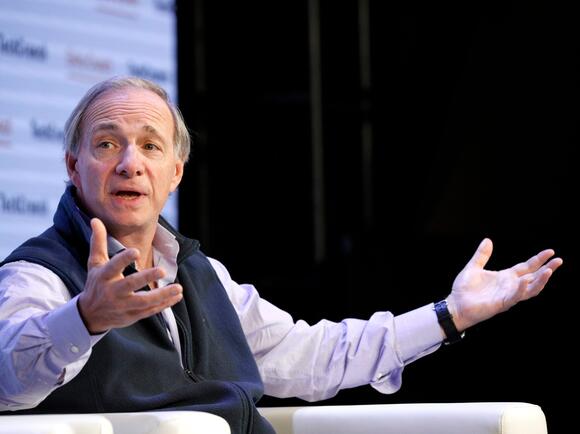 The billionaire investor Ray Dalio likened China's move to banish private citizens from the public eye to that of a "strict parent."

The founder of the investment-management firm Bridgewater Associates was speaking with the CNBC anchor Andrew Ross Sorkin on Tuesday.

Sorkin asked Dalio how he reconciled investing in the country when it has human-rights issues and some of its high-profile citizens have vanished from the public view recently.

The investor has long been bullish on the Asian superpower. His firm, the largest hedge fund, which has $150 billion in assets under management, has surpassed most other private-fund managers in China with its 8 billion yuan fund.

Watch the clip below.

The Chinese tennis player Peng Shuai vanished from the public view on November 2 after accusing former Chinese Vice Premier Zhang Gaoli of sexual assault. She reappeared a few weeks later, but the disappearance had sparked a public outcry on a national and global scale.

On Wednesday, the Women's Tennis Association announced an immediate suspension of all tournaments in China, including Hong Kong, because of Peng's treatment.

The former US Open semifinalist's disappearance from the public eye came after Alibaba founder Jack Ma was unseen publicly for several months after sparring with Chinese regulators.

you see that's the thing. once you turn 18 you move out of your parents house. so you can live by your own rules. I think it's more like a nazi government move.

I would like to disappear him. He is one of many elites that got into bed with the CCP. Like Beijing Biden.

so, it's ok and our govt would receive his blessing if they confiscated his billions and he disappeared?how generous of him!

Stock markets tumbled last week on fears about rising interest rates and inflation. The tech-heavy Nasdaq index fell 8% last week and is down 13% this year. The world's five richest tech tycoons have collectively lost about $85 billion in 2022.
STOCKS・1 DAY AGO
Markets Insider

Jeremy Siegel expects more downside ahead for US stocks and expects the bottom to be months away. "I think there's more pain to come," he told CNBC. "I certainly wouldn't be surprised that the Nasdaq go into the bear market territory and the S&P." The Wharton professor also said he...
STOCKS・15 HOURS AGO
MarketWatch

‘No signs of panic’ by Corporate America’s debt investors, even with stock market turbulence

Debt investors in top American companies aren't freaking out, even as turbulence on Monday briefly threatened to land the S&P 500 in correction territory.
STOCKS・10 HOURS AGO
Markets Insider

US stock futures fall as investors shun risky assets ahead of the key Fed rate meeting, while the crypto sell-off persists

US futures fell Monday after stocks suffered their worst week since the March 2020 sell-off. The rout in crypto markets showed little sign of abating, with tokens deep in the red. Investors have dumped speculative assets as they brace for the Fed to hike rates in 2022. US stock futures...
STOCKS・23 HOURS AGO

"The fact that it will bail out the stock market at some pre-determined level of losses... I think it's a very dangerous idea to uphold," Chanos said.
STOCKS・1 HOUR AGO
wallstreetwindow.com

Choose One, But Only One: Defend the Billionaire’s Bubble or the U.S. Dollar and Empire – Charles Hugh Smith

The Empire is striking back, protecting what really counts, and the Billionaire Bubble sideshow is folding its tents. One of the most enduring conceits of the modern era is that the Federal Reserve acts to goose growth and therefore employment while keeping inflation moderate (whatever that means–the definition is adjustable). This conceit is extremely handy as PR cover: the Fed really, really cares about little old us and expanding our ballooning wealth.
BUSINESS・1 DAY AGO
Markets Insider

Jeremy Grantham predicts the US 'superbubble' will pop, wiping out $35 trillion in stocks and housing. Here are the 11 best quotes from his new note.

Legendary investor Jeremy Grantham has said the US is in an epic market bubble that could soon implode. He said a crash could wipe out $35 trillion of value, attacked the Fed, and provided some investment advice. Here are the 12 best quotes from the GMO founder and market historian's...
STOCKS・4 DAYS AGO
Markets Insider

The Fed is poised to hike interest rates this year. Warren Buffett has compared rates to gravity — and said they 'power everything in the economic universe'

The Federal Reserve is poised to hike interest rates in a bid to curb inflation this year. Warren Buffett has emphasized the critical importance of rates in valuing assets. The investor compared interest rates to gravity, and recommended ignoring predictions about them. Sign up here for our daily newsletter, 10...
BUSINESS・2 DAYS AGO

Grantham, who sounded the alarm on a "superbubble" this week, said the hype around meme stocks, crypto, and other high-risk assets has dropped off.
STOCKS・3 DAYS AGO
Markets Insider

Carl Icahn told CNBC Thursday he won't let problems with inflation bother his investment philosophy. The legendary investor agreed there are bubbles in the market, saying some stock valuations are "out of this world." You don't have to be a genius to understand high levels of stimulus drives high inflation,...
BUSINESS・3 DAYS AGO
The Motley Fool

Why This Legendary Billionaire Investor Is All In On Crypto

Bill Miller is one of the most successful investors of all time, and Bitcoin is the top investment he recommends.
STOCKS・3 DAYS AGO
Markets Insider

When the "superbubble" bursts, the legendary investor predicts a total wealth loss of $35 trillion in the US alone.
STOCKS・4 DAYS AGO

Jan 21 - Welcome to the home for real-time coverage of markets brought to you by Reuters reporters. You can share your thoughts with us at markets.research@thomsonreuters.com. INDIVIDUAL INVESTORS KEEP A WATCHFUL EYE ON INFLATION (1345 EDT/1845 GMT) As part of the most recent American Association of Individual Investors (AAII)...
BUSINESS・3 DAYS AGO
Newsweek

Rubio is Right: We Must Stop U.S. Billionaires from Empowering China | Opinion

Sen. Rubio is right—the U.S. government cannot allow these companies to continue putting China's interests above our own.
U.S. POLITICS・6 DAYS AGO
Ledger-Enquirer

Investors in the stock and bond markets are uneasy about two moves the Federal Reserve plans to make in 2022: reducing its balance sheet and increasing interest rates. Both stock and bond investors have received losses already in the new year, with the impact of the monetary tightening spreading. During the past 10 trading sessions in 2022, the Nasdaq Composite Index dipped by over 8% while Treasuries dipped by 2.3%.
STOCKS・5 DAYS AGO
americanmilitarynews.com

US billionaire investor says ‘nobody cares’ about China’s Uyghur genocide

Chamath Palihapitiya, a Sri-Lanken born U.S. billionaire venture capitalist, said during a podcast over the weekend that “nobody cares” about ongoing human rights abuses against the Muslim minority Uyghur population in China’s Xinjiang province, which both President Donald Trump and President Joe Biden’s administrations have labeled genocide.
FOREIGN POLICY・6 DAYS AGO
virginia.edu

Although the U.S. still boasts the highest total number of billionaires of any country, China is — not surprisingly — hot on its heels. According to Forbes magazine’s 2021 World’s Billionaires List, the number of billionaires in China rose by more than 60 percent between 2020 and 2021 (growing from 387 to 626), as compared to an increase of 18 percent (from 615 to 724) for the U.S. during the same time period.
ECONOMY・6 DAYS AGO
Markets Insider

Billionaire Ray Dalio says the US could learn from China's equality drive, and says it's the riskier place to invest

Ray Dalio has praised China's "common prosperity" equality drive, saying the US could learn from it. The billionaire investor said the US is the riskier place to invest, as a debate on the issue rages on Wall Street. Last week, DoubleLine boss Jeff Gundlach said China is "uninvestible" given ongoing...
ECONOMY・13 DAYS AGO
WestfairOnline

Connecticut’s richest resident is calling on the U.S. to follow the example of China’s communist government and redistribute wealth among its population. According to a Bloomberg report, Ray Dalio, founder of the $150 billion Westport-based hedge fund Bridgewater Associates, insisted that the U.S. and other Western nations misunderstand the goals of Chinese President Xi Jinping in creating more opportunity by having government spread prosperity.
CONNECTICUT STATE・13 DAYS AGO
US News and World Report

HONG KONG (Reuters) - U.S. investor Ray Dalio, founder of the world's largest hedge fund, says investors need to be mindful of the current inflationary environment and stop viewing cash as a safe investment. The comments come as major central banks around the world have started or are preparing to...
BUSINESS・14 DAYS AGO