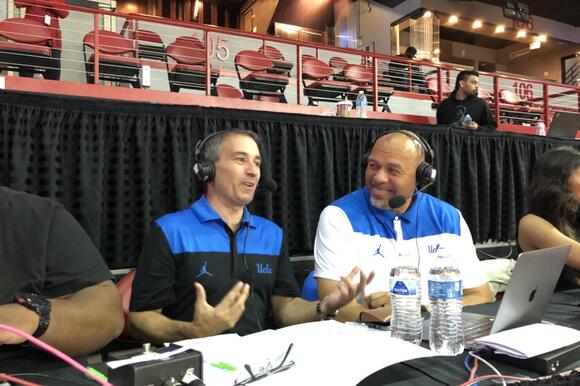 It’s 29 minutes until takeoff and Josh Lewin is contemplating his first delay.

The radio voice of the UCLA Bruins stares at David Singleton as the senior guard steps to the free-throw line inside Nevada Las Vegas’ Thomas & Mack Center, having been needlessly fouled with 10 seconds left in a runaway victory .

Every second counts for Lewin. He needs the game to end quickly so that he can shed his headset and race toward the limousine idling outside a back entrance to the arena, waiting to take him to a private terminal at McCarran International Airport for a 40-minute flight back to Southern California.

Lewin has another game to call. UCLA’s football team is playing its final contest of the regular season at the Rose Bowl in roughly 3½ hours and Lewin doesn’t want to miss it, even though his bosses would forgive him for passing on the daring daily double. It’s going to take some luck, in addition to the weeks of planning, to pull this off.

Moments later, the basketball game ends. Lewin shares some final thoughts with partner Tracy Murray, pats him on the shoulder and rises from his seat in the black Nikes he wore to increase his footspeed.

“I don’t want to jinx it,” Lewin says, assessing his chances of making the JetBlue flight to Burbank, “but I think we’ve got this.”

A short route to the exit beckons from Lewin’s spot almost halfway up the arena. He jogs down a few steps, through a tunnel and down a hallway, stopping momentarily to collect a dropped pen before bursting through the door.

Sergio Tamriz, the smiling limousine driver, greets Lewin outside as he ambles into the vehicle. Lewin moves into a leather seat behind the driver so that he can provide the fastest route for the 1.7-mile journey

to the airport on his Waze app.

The limo departs, crawling along a driveway littered with UNLV fans. One in a Larry Johnson jersey saunters in front of the vehicle, causing a delay of several precious seconds.

Finally, the path clearing, the limo accelerates and makes a few quick turns before reaching a red light.

“These lights are a killer, boy,” Lewin says, checking his phone.

This is hardly the most ambitious itinerary attempted by the veteran broadcaster, who compares himself to a less handsome version of the travel-worshipping George Clooney in “Up in the Air.”

In 2015, Lewin called an afternoon NFL game between the Baltimore Ravens and San Diego Chargers in Baltimore followed by Game 5 of the World Series between the New York Mets and Kansas City Royals in New York.

It required a police escort out of the Ravens’ M&T Bank Stadium that came courtesy of a connection with the team.

“They were kind enough to make it sound to their operations people,” Lewin says, “like this was life or death.”

Mindful of potential delays, Lewin shunned the one commercial flight that could have gotten him to Citi Field on time, paying out of his own pocket for a ride on a two-seat prop plane in which he became the de facto co-pilot. He knew as soon as he landed that he was going to make it — with New York’s La Guardia Airport essentially walking distance from the ballpark.

Another police escort was necessary to expedite Lewin’s departure from Qualcomm Stadium after a Chargers game in 2016, his first season calling UCLA football and basketball games. The security might have been more useful clearing a path inside the stadium.

The rest of the afternoon was less eventful, Lewin taking another private plane to the Santa Monica Airport before being whisked in a car to Pauley Pavilion, settling into his seat four minutes before the Bruins’ 6:05 p.m. tipoff against Cal State Northridge.

Over the years, Lewin has been a play-by-play voice of the Bruins, Mets, Chargers, Texas Rangers and Detroit Tigers in addition to calling games for the Boston Red Sox and Chicago Cubs, among other broadcast duties.

“Basically 35 straight years of doing baseball,” said Lewin, 53, “but once I got out here and put the UCLA thing in my lungs, it was kind of like, 'All right, this is not my next job, this is my last job' and I want to make this work and I think the way to make this work is to get my butt out to the West Coast and try to be around as much as possible.”

When he was hired, Lewin promised then-UCLA athletic director Dan Guerrero he would do everything he could to never miss a game. It’s happened only twice because of scheduling conflicts, once during the 2016-17 season while Lewin was also calling games for the Chargers and Mets and once in the fall of 2019, when he missed the UCLA football team’s epic 67-63 comeback victory over Washington State because he was calling a Red Sox game in St. Petersburg, Fla.

Another missed game seemed probable Saturday given the scheduling overlap until Lewin saw the start times — 2 p.m. for basketball, 7:30 p.m. for football. So what if the games were in different states and he’d have to make it from the arena to the airport in less than a half hour?

“Only Josh can pull it off,” Murray said about an hour before the basketball game. “He’s got that ‘S’ on his chest.”

In the limo, Lewin provides a different sort of play by play.

“Left on Paradise,” he tells the driver. “Right on Tropicana.”

After some slow going, a stretch of open road lies ahead. The speedometer climbs, but the satisfaction is only momentary. Another red light perched above a line of cars could force the limo to wait two cycles before making a left turn.

Nick Koop, a broadcaster who is on standby in case Lewin can’t make it to the Rose Bowl on time, might just have to handle the game’s opening minutes if Lewin gets bumped to the next flight an hour later.

The driver takes a hard left into a parking lot, narrowly avoiding a collision in hopes of a shortcut. He zooms over several speed bumps, Lenny Kravitz’s “American Woman” blasting from the sound system as the car bops up and down.

“That was a veteran move, the parking lot shimmy,” Lewin says. “Your shocks died a hero.”

A call is placed to airline officials to let them know Lewin is on the way and would appreciate any accommodations to help make the 4:25 p.m. flight. It’s now 4:07. The limo is about a half mile from the terminal when a sluggish white SUV blocks its path ahead of another left turn, slowing the pace considerably.

Unlike the final moments of the basketball game the Bruins easily won, this outcome could go either way.

Wouldn’t it be cool to be Josh Lewin, voice of the Bruins?

The budding broadcaster already had his own pretend radio station, WJML 700-AM, standing for Joshua Mark Lewin. Using a Sharpie, he wrote the call letters on a pillowcase that he hung near his television in the basement of his Rochester, N.Y., home, completing the fantasy.

He would call the college and NFL games of the week, using rosters he had culled from newspapers and Sporting News yearbooks.

“Just a squeaky little voice trying to call touchdowns and stuff,” Lewin said. “I never wanted to be a cowboy or an astronaut or any of that stuff — I just wanted to do this.”

After having worked for as many as three organizations at once, Lewin is easing his way into midlife. He’s dedicated solely to the Bruins, calling his final Chargers game in 2016 and his last Major League Baseball game in 2019.

Interest in UCLA football and basketball has skyrocketed in his five seasons with the school. The football team has followed the basketball team’s Final Four run with its first winning season since 2015, giving Lewin extra incentive to cover them both Saturday.

The limo pulls up to the private terminal at 4:11 p.m., only 15 minutes after the game ended. There are 14 minutes to go before takeoff.

Fortunately, there’s just one group ahead of Lewin at each of the two check-in kiosks. Security is minimal, consisting of agents running a paper strip over bags to check for explosives residue.

Lewin snatches his boarding pass and moves to the far side of the waiting area to begin his final game prep, taping chunks of text onto a poster. He’s assured of making the flight even before a 15-minute delay is announced.

Settling into seat 4A on the 30-seat Embraer, Lewin prepares for more work as the jet lifts into the evening sky, breathtaking hues of orange and purple blending together over nearby mountain ranges. His overhead light is the only one illuminated for much of the flight that ends with a hard touchdown at 5:40 p.m. at Burbank’s Bob Hope Airport.

David LaPeer, the son of longtime former UCLA broadcaster Chris Roberts, steps forward to greet Lewin after he enters the terminal. Lewin checks his phone. It shows the route taking only 25 minutes to reach the Rose Bowl.

“We should be in great shape,” he says.

The pregame show that airs at 6 p.m. with Lewin sitting in the backseat of a car on Highway 134 reveals that you really can be in two places at once.

“Yeah, right,” Lewin cracks moments before his own voice comes over the radio on a pre-taped segment.

In a matter of minutes, Roberts pulls into Lot K. Lewin scans all the open parking spaces, joking that he doesn’t need officers to clear a path for his arrival.

At 6:21 p.m., with more than an hour to spare, Lewin walks into the Rose Bowl, victory assured before kickoff.