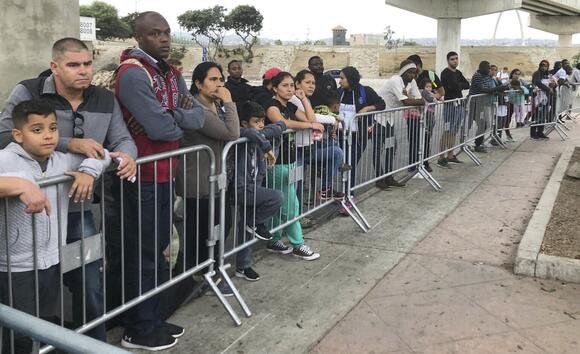 The Biden administration has reached a deal with the Mexican government to restart a Trump-era border initiative that mandated all asylum-seekers be returned to Mexico while their claims are processed.

U.S. and Mexican officials struck an agreement re-implementing the Migrant Protection Protocols program, otherwise known as "Remain in Mexico," U.S. officials announced Thursday. The Biden administration was forced to follow the Remain in Mexico plan by a Supreme Court order earlier this year.

The Departments of Homeland Security, Justice, and State on Thursday morning outlined the plan to restart the program, confirming that Mexico had agreed to accept back migrants returned under MPP. The two governments will work out the details before reimplementing the program on Dec. 6 at seven ports of entry along the southern border: San Diego and Calexico in California; Nogales in Arizona; and El Paso, Eagle Pass, Laredo, and Brownsville in Texas.

MULTIPLE MIGRANT CARAVANS STRUGGLE TO MOVE OUT OF SOUTHERN MEXICO

In a statement Thursday morning, the administration noted it was reimposing the policy under duress, saying that "Secretary of Homeland Security Alejandro N. Mayorkas has repeatedly stated that MPP has endemic flaws, imposed unjustifiable human costs, pulled resources and personnel away from other priority efforts, and failed to address the root causes of irregular migration."

The Biden administration revised MPP to ensure all who are sent back to Mexico have their cases resolved in six months and are not waiting indefinitely, as some of the 60,000 returned under Trump had been. It also mandates that asylum-seekers have "secure access to, and communicate with, counsel before and during non-refoulement interviews and immigration court hearings" and requires more information about the legal process be provided to asylum-seekers, so they better understand the process. Asylum-seekers will also be offered coronavirus vaccines.

Single adults and families are expected to be placed into the program if they are not able to be immediately expelled to Mexico under a separate U.S. initiative known as Title 42, the Wall Street Journal reported . Title 42, a coronavirus pandemic restriction the Trump administration enacted in March 2020, allowed border officials to turn away immediately any child or adult who came across the border. The Biden administration still operates under Title 42, but in the spring, it stopped sending back most families to their home countries because Mexican state governments refused to take back migrants who were not from Mexico or Central America.

Mexico agreed, as before, to accept Spanish speakers, which could mean Haitian migrants, many of whom are coming from South America.

The elderly, people with physical or mental disabilities, and people who identify as lesbian, gay, bisexual, or transgender will be exempt from return under MPP because they are at greatest risk of abuse or discrimination if sent back to Mexico.

Biden suspended the Remain in Mexico policy upon taking office and originally tried to end it in June, but was successfully sued by Texas and Missouri to reinstate it and lost an appeal to the Supreme Court. The administration has been in the process of restarting the program to fulfill the court order while it works to end it in a way that can withstand another legal challenge.

The move to restart the program follows the Biden administration’s second attempt to gut it in October. The DHS issued a memo to agency heads on Oct. 29 stating plans to try again at rescinding MPP on the basis it imposed “substantial and unjustifiable human costs on the individuals who were exposed to harm while waiting in Mexico.”

Although the court ordered the government to reinstate Remain in Mexico, the United States could not do so without cooperation from Mexico. The Mexican government sought assurances the asylum cases would be processed faster than they were under the previous administration, according to the Washington Post .

One factor that influenced Mexico's decision was the Biden administration's willingness to launch a joint development program with Mexico aimed at addressing problems in Central America that prompt people to flee north. Sembrando Oportunidades, or Planting Opportunities, was similar to a project that Mexican President Andres Manuel Lopez Obrador had been lobbying the U.S, to take up for several years, the Post reported.

The DHS recently disclosed in court documents related to the MPP suit that the U.S. has forked up $14 million and plans to spend an additional $24 million per month to set up tent courts where judges will hear asylum cases in select regions of the U.S.-Mexico border.

Although the Biden administration previously stated this restart is not intended to be permanent, the move may face legal action.

Marielena Hincapié, executive director of the National Immigration Law Center, called the new MPP deal a "shameful regression." NILC warned Attorney General Merrick Garland and Mayorkas in November they may sue on the basis that MPP violates the rights of Salvadorans seeking asylum in the U.S.

We Americans barely have our stuff together. We’re facing inflation pricing and a new Covid variant stronger than the Delta, our Congress is in disarray, we have no structure why would we consider allowing immigrants in at this time. Immigrant proponents you are single minded and not looking at American Rights. It was an American that gave you the right to advocate for immigrants it wants Haiti, Ecuador or Guatemala so, step back and let Americans breathe. There is no right to immigrate here and we’re not listening because we need a breathe. I don’t care how close to death they are , aren’t their governments responsible for them? How about advocating for that?

Neither of Donald Trump's impeachment trials led to his conviction, which would have prevented him from returning to the White House. Rep. Jamie Raskin has another idea on how to bar the former president.
POTUS・12 HOURS AGO
WashingtonExaminer

Biden: Texas synagogue attack 'was an act of terror'

President Joe Biden told reporters that the man who took four hostages at a Texas synagogue on Saturday night committed an "act of terror."
TEXAS STATE・1 DAY AGO
Newsweek

One QAnon follower said: "When he came out…I instantly felt it was not him. I kept trying to convince myself that it was."
ARIZONA STATE・20 HOURS AGO

The U.S. Senate's only Black Republican is putting forth what he characterizes as a positive response to partisan rhetoric on race that he's best-positioned to rebut
PRESIDENTIAL ELECTION・17 HOURS AGO
Daily Mail

Florida Lieutenant Governor Jeanette Nuñez took aim at President Joe Biden on Sunday, claiming his 'disastrous' policies are driving Hispanic voters out of the Democratic Party. She made the comments in an interview with Fox & Friends, less than a year until the midterm elections that will decide who...
PRESIDENTIAL ELECTION・1 DAY AGO
News 8 WROC

By the numbers: Stats that tell story of Biden’s first year

32 “not a joke" references. It's one of Biden's favorite speech lines.
PRESIDENTIAL ELECTION・16 HOURS AGO

The MyPillow founder made the remarks at Trump's Arizona rally, where many speakers touted conspiracy theories about the 2020 election.
PRESIDENTIAL ELECTION・1 DAY AGO
Business Insider

No evidence of fraud found in GOP-backed audit of election results in Macomb County, Michigan, which Trump won anyway

The review in Michigan's Macomb County located nothing that would advance the conspiracy theories held by many Trump supporters around the election.
MACOMB COUNTY, MI・17 HOURS AGO
Newsweek

Calls to somehow undo the 2020 election results once again rang out during the former president's rally in Florence.
PRESIDENTIAL ELECTION・15 HOURS AGO
MSNBC

In August 2018, CNN discovered that a White House speechwriter, Darren Beattie, spoke at a conference alongside well-known white nationalists. He was asked to resign, but he refused, prompting the Republican White House to fire Beattie soon after. But as regular readers may recall, Team Trump wasn't quite done with...
PRESIDENTIAL ELECTION・14 HOURS AGO
Newsweek

"100 Seats, 100 Years," he added on Gettr, referring to the century of political domination he argues will begin with the midterms.
ARIZONA STATE・1 DAY AGO

Will false Trump electors’ attempt to hijack the Georgia vote be punished?

The 16 Georgia Republicans who assembled at noon on Dec. 14, 2020, in the state Capitol and falsely certified that Donald Trump had won the state’s electoral votes were not the nation’s only bogus electors. They made up just one of seven groups falsely claiming Trump was the victor in states where the majority of […] The post Will false Trump electors’ attempt to hijack the Georgia vote be punished? appeared first on Georgia Recorder.
GEORGIA STATE・47 MINUTES AGO
Newsweek

His poll numbers continue to languish, though 45 percent of all voters said they "feel better" about him than they did about Trump.
PRESIDENTIAL ELECTION・1 DAY AGO
The Guardian

For Biden, it's been a year of lofty ambitions grounded by the unrelenting pandemic, a tough hand in Congress, a harrowing end to an overseas war and rising fears for the future of democracy itself.
PRESIDENTIAL ELECTION・1 DAY AGO