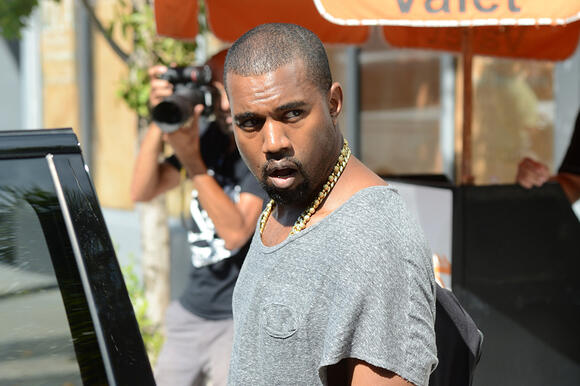 According to @YeezyMafia, the “Dazzling Blue” iteration of the popular running-inspired lifestyle shoe will hit stores in spring 2022. Although images of the style have yet to surface, the Yeezy insider shared several mockup photos on Instagram to give fans an idea of what to expect next year.

The shoe is expected to don a predominantly black color scheme on the breathable Primeknit upper that’s combined with a royal blue stripe on the lateral side that features the text “SPLY-350.” Adding to the stealthy execution are black shoelaces, a semi-translucent midsole that houses the full-length Boost cushioning, and a solid black outsole.

The Adidas Yeezy Boost 350 V2 made its retail debut in 2016, and some of the releases from that year were three new green, red and copper colorways that arrived on Black Friday. The aforementioned trio featured a similar color blocking to the forthcoming “Dazzling Blue” makeup but donning blue accents.

Although early info of the Yeezy Boost 350 V2 “Dazzling Blue” colorway was shared by @YeezyMafia, the release details have not been confirmed by Adidas.

In related Adidas Yeezy News, there are two new Adidas Yeezy styles dropping this week. The first pair will hit stores tomorrow with the Yeezy QNTM “Amber Tint” releasing in full-family sizing followed by the Yeezy 500 “Ash Grey” arriving on Saturday. Both pairs will be available at Adidas.com/Yeezy and the adult sizing for the shoes retail for $250 and $200, respectively.

Rap Icon Raekwon Reimagines a Classic Diadora Sneaker, Which Will be Sold Exclusively at Foot Locker

Rap icon Raekwon the Chef and Diadora have been cooking up something special for sneakerheads, which will land on shelves at Foot Locker Inc. soon. The Wu-Tang Clan standout, the footwear brand and the retailer have joined forces to launch a new program dubbed “Community Linx,” which will yield product collections that are built with, and linked to, communities. The first launch includes two new iterations of the classic Diadora N9002 silhouette. “It’s just a comfortable, nice shoe. There’s just something about it, to me, that gives you comfort, style — those things are important to me,” Raekwon told FN. “When you...
HIP HOP・1 DAY AGO
Footwear News

The Adidas Yeezy 450 Surfaces In a New Brown Colorway

It appears that more colorways of the acclaimed Adidas Yeezy 450 could be hitting shelves soon. After making its retail debut in the “Cloud White” makeup last year with sizes of the shoe selling out within minutes, sneaker leak social media account @Yeezyinfluence has revealed on Instagram that the Yeezy sneaker will launch in an all-brown iteration this year for a retail price of $200. The images and the mock-up depiction from the Yeezy insider show that the forthcoming style will don a predominantly brown Primeknit upper, which features a sock-like fit with a snug ankle collar. This iteration of the Yeezy...
APPAREL・9 DAYS AGO
Footwear News

The Louis Vuitton and Nike “Air Force 1” by Virgil Abloh sneakers are almost here. Open for bidding Jan. 26, 200 special-edition pairs of the shoes, paired with a Louis Vuitton pilot cases, are up for auction in partnership with Sotheby’s. Proceeds will benefit The Virgil Abloh “Post-Modern” Scholarship Fund, which in partnership with the Fashion Scholarship Fund, supports the education of academically promising students of Black, African American, or African descent — per Abloh’s wishes. The designer, who founded and built Off-White into a formidable brand and made a huge mark at Louis Vuitton as the men’s artistic director, died at...
AEROSPACE & DEFENSE・1 DAY AGO
hypebeast.com

Kanye West continues to be the talk of the town in pop culture as he recently went public about his newest fling with actress Julia Fox and officially announced his latest YEEZY GAP initiative “ENGINEERED BY BALENCIAGA.” 2022 has already started off hot for the creative genius, and it’s only going to get even better as he’s got a plethora of new.
BEAUTY & FASHION・11 DAYS AGO

Every year, Kanye West attempts to outdo himself in terms of delivering even more. YEEZY products to the market, and this Spring, the creative polymath intends to supply you with a boatload of new installments. One of the models that will be produced in many a different colorway throughout the course of the year is the adidas YEEZY 450, and it has just surfaced in a brand new “Cinder” colorway.
APPAREL・9 DAYS AGO
Footwear News

LaMelo Ball has another new iteration of his acclaimed Puma MB.01 sneaker coming soon. This time, the sophomore point guard for the Charlotte Hornets has tapped the hit tv series “Rick and Morty” to create a new mismatched makeup of his Puma signature shoe, which will hit shelves in February. According to the sportswear brand, the “Rick and Morty” x Puma MB.01 collab dons various graphics throughout the shoe that’s inspired by Rick and Morty’s intergalactic misadventures. The sneaker wears a mismatched look, donning a bright green color scheme for the left shoe while a vibrant red hue covers a majority of the right pair....
BEAUTY & FASHION・1 DAY AGO
hypebeast.com

Kanye West‘s 2022 is already off to a blazing start as he was recently announced at Coachella’s Sunday headliner and he unveiled his YEEZY GAP “ENGINEERED BY BALENCIAGA” creative venture. And on top of all of those initiatives, the DONDA artist is also readying a giant crop of new YEEZY footwear offerings, one being this upcoming.
DESIGNERS & COLLECTIONS・7 DAYS AGO
Footwear News

A new iteration of the Adidas Yeezy Knit Runner is coming soon. The North Carolina-based sneaker store Sole Priorities shared a first look on Instagram at the Kanye West-designed sneaker in the unreleased “Stone Carbon” makeup. The latest imagery shows the silhouette donning a predominantly black knit upper but is offset by a brown ankle collar and at the midfoot. The shoe’s standout design element is the slip-on design, which allows fans to wear the sneaker without the need for shoelaces. Additional details include the shoe size stamped by the ankle collar while indents appear at the center of the midsole. Rounding...
APPAREL・8 DAYS AGO

As winter hits its peak, Kanye’s Yeezy Knit Runners may just be your saving grace. After its “Sulfur” debut last year, the brand is ready to release the two-toned “Stone Carbon.”. The knitted, laceless boot is a winter alternative to the perforated Yeezy Foam Runner. The...
APPAREL・10 DAYS AGO
hypebeast.com

adidas Originals Readies the SUPERTURF ADVENTURE for a General Release

Sean Wotherspoon‘s collaboration with Originals on the SUPERTURF ADVENTURE might have been a divisive one, but things may be about to change for the silhouette as the Three Stripes has been busy making two new general release colorways. Coming in “Cream White” and “Wild Brown,” these GR iterations take...
APPAREL・14 DAYS AGO
SneakerFiles

Adidas Basketball will launch a Chinese New Year collection to celebrate the Year of The Tiger. One of the drops will be the Trae Young 1 dressed in a Sky Rush, Blue Rush, and Core Black color combination. Looking closer, this adidas Trae Young 1 comes constructed with the usual...
BEAUTY & FASHION・13 DAYS AGO
Hypebae

Joining a pink and red Air Jordan 1 and a lace-trimmed Nike Dunk Low, adidas is releasing a Valentine’s Day-themed UltraBOOST. The sneaker comes with a black and gray Primeknit upper with classic red hearts woven throughout. Additional hits of red land on the shoe’s lateral heel branding and insole. Sleek black covers the lacing system, heel cap, lining and BOOST midsole, while light blue and pink pop on the shoe’s tongue tag.
BEAUTY & FASHION・9 DAYS AGO

The Nike Waffle Debut is the latest rendition part of the Waffle family, and so far, we have previewed a few color options. One of those will come dressed in Yellow and Blue, which we have seen on previous Waffle iterations. Constructed with nylon and leather while suede adorns the...
APPAREL・7 DAYS AGO
SneakerFiles

Parley and adidas Originals will debut a special 4DFWD that features recycled materials. This adidas 4DFWD comes constructed with a knitted upper while a thick cable runs throughout highlighted in Green. Next, Black fills in the branding, collar, and rubber outsole while we have the traditional 4D-printed midsole. Lastly, co-branding on the tongue labels and outsole finishes the look.
LIFESTYLE・11 DAYS AGO
hypebeast.com

Yohji Yamamoto has a penchant for pushing the boundaries of where lifestyle footwear can go by often crafting silhouettes that are both avant-garde and fashion-forward. The Japanese fashion designer has a unique ability to merge the worlds of contemporary design with modern footwear technology, and he’s done exactly that with his all-new.
APPAREL・14 DAYS AGO
SneakerFiles

Adidas Originals is set to launch a new Forum Low, expanding the color offerings. For their next drop, it comes in a simple White and Beige scheme. This adidas Forum Low comes highlighted with White leather on the base while Beige suede adorns the overlays and ankle strap. Next, White nylon appears on the tongue, laces, midsole, and rubber outsole to finish the look.
RETAIL・13 DAYS AGO
SneakerFiles

Adidas Originals will launch the Forum Low highlighted in a Light Blue while constructed with mesh and suede. Looking closer, this adidas Forum Low comes constructed with a thick mesh on the base while suede adorns the overlays. We also have shades of Blue throughout, with a lighter shade on the liner and below the mesh base, while a darker yet more vibrant hue runs across the overlays. Other highlights include Blue on the strap and White on the midsole, and rubber outsole.
BEAUTY & FASHION・9 DAYS AGO
SneakerFiles

Adidas Originals latest Ultra Boost, the Ultra Boost 2022 will release in a bright Yellow which is sure to turn some heads. This adidas Ultra Boost 2022 comes dressed in a Yellow, Legacy Indigo, and Sky Rush color combination. The pair comes constructed with Primeknit on the upper that features high-performance yarn with at least 50% Parley Ocean Plastic. Other details include a White Boost midsole and a Continental rubber outsole.
RETAIL・1 DAY AGO
malemodelscene.net

The Adidas Yeezy Boost 350 has become Kanye West’s and Adidas’ most iconic model since its debut in 2015. When the sneaker was released, it created a massive splash in sneaker history. The most notable of all was the release of the Yeezy Boost 350 Turtle Dove. Adidas’ unique Primeknit fabric is knitted into intricate off-white and dark blue patterns. With a one-of-a-kind heel tab and a rubber sole. The sneaker’s few laces ensure a secure fit on any foot. They have become so popular and replicated by other manufacturers that they’ve almost developed into their own shoe sub-genre.
APPAREL・2 DAYS AGO
hypebeast.com

After being personally revealed by Jerry Lorenzo last month, we could be seeing an official first drop from the highly anticipated Fear of God x. This weekend an unexpected pop-up booth for the long-term partnership showed up at INNERSECT 2022 in Shanghai, China. Complete with a logo marked storefront, the experience at the exhibition featured the release of hoodies and crewneck sweaters in the fluorescent yellow colorway revealed by Jerry Lorenzo. It is now believed that the set of styles will see a wider global release in the coming weeks.
DESIGNERS & COLLECTIONS・3 DAYS AGO