What Does Bitcoin Mean for PayPal Stock?

It's estimated that up to 200 million consumers worldwide have transacted with Bitcoin (CRYPTO: BTC) in some way. As Bitcoin and other digital coins become more popular alternatives to holding cash, it's imperative for PayPal Holdings (NASDAQ: PYPL) to offer its more than 400 million active customers a means for transacting with Bitcoin, especially if it wants to keep up with the competition.

Through the first half of 2021, Square 's (NYSE: SQ) Cash App was downloaded at almost twice the rate of PayPal's Venmo. Furthermore, Square first offered its users the ability to buy Bitcoin four years ago. 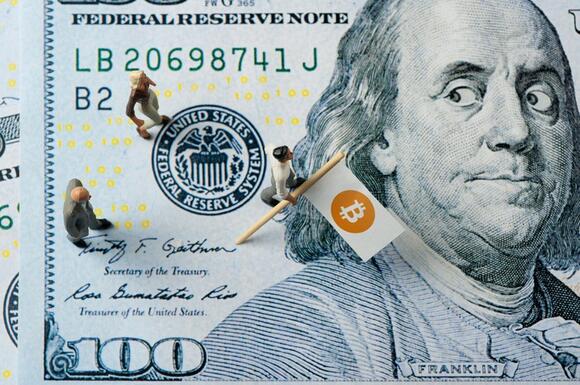 Toward the end of 2020, PayPal finally jumped on board the crypto train and offered the ability to buy, sell, and hold cryptocurrencies, including Bitcoin, Ethereum , Litecoin , and Bitcoin Cash . It followed up on that move by launching crypto in the Venmo peer-to-peer payment app in April.

While crypto transactions are likely not impacting PayPal's profitability that much, there is clear evidence that they are meaningfully boosting user engagement, which could make the increasing popularity of Bitcoin and other digital currencies an important growth driver for PayPal.

PayPal users are engaging with the new crypto offering

PayPal has made some major improvements to its apps this year. In addition to offering cryptocurrency, it recently overhauled the PayPal app with new shopping features, and announced other features coming soon, including a savings account and other investment capabilities. It's clear that PayPal users are taking a strong interest in the ability to buy crypto.

During the third-quarter earnings call last month, management noted that first-time users transacting with crypto in the PayPal app increased 15% compared to the old app's usage. In the second quarter, management reported "strong adoption and trading" of cryptocurrency after launching it for Venmo users in April.

However, that's about as specific as management got with analysts on the earnings call. Unlike Square, PayPal doesn't disclose specific revenue amounts from processing fees for cryptocurrency transactions. Square said it generated $8 billion in revenue from processing Bitcoin transactions through the first nine months of 2021. But the costs to process those transactions amounted to nearly $7.9 billion, which leaves a very slim gross margin.

If PayPal's gross margin on its own Bitcoin transactions is about the same as Square's, then crypto is not impacting its bottom line that much. PayPal was already a very profitable business before offering crypto, generating $4.2 billion of net profit on $21 billion of total revenue in 2020.

Still, the availability of cryptocurrency on PayPal's apps appears to be fueling a meaningful acceleration in how often customers are opening their apps, which is nearly as important.

The ability to buy Bitcoin through the PayPal and Venmo apps provides enormous benefits in attracting new users and maintaining high engagement with customers. CEO Dan Schulman said as much earlier this year during the first-quarter earnings call: "About half of our crypto users open their app every single day."

We can see engagement across the platform continuing to march higher. The average number of transactions per active account reached a new high of 44.2 per year, representing a year-over-year increase of 10% in the third quarter. This basically means the average customer is opening the app almost once per week, but the rate of increase has accelerated significantly over the last year. This time a year ago, annual transactions per account grew just 1% year over year to 40.1.

Moreover, all the new features included in the overhauled PayPal app that launched in September are driving interest in other offerings, too. During the third-quarter earnings call, management noted that Cash Card enrollments were up 35% since launching the new app.

Overall, I wouldn't expect cryptocurrency trading to be boosting PayPal's earnings significantly right now, but just as important, it seems to be driving engagement across the business. This way, it can fuel additional revenue and profit as users pop in to check out the cryptocurrency features but end up engaging with other services instead.

PayPal stock tanked following its third-quarter earnings report, as management's near-term guidance failed to impress. But the acceleration in engagement following PayPal's entry into the world of cryptocurrency shows why the share price will eventually bounce back, and why it's still a great investment for the long term.

10 stocks we like better than PayPal Holdings
When our award-winning analyst team has a stock tip, it can pay to listen. After all, the newsletter they have run for over a decade, Motley Fool Stock Advisor , has tripled the market.*

They just revealed what they believe are the ten best stocks for investors to buy right now... and PayPal Holdings wasn't one of them! That's right -- they think these 10 stocks are even better buys.

There are other programmable blockchains out there that show promise for bright futures.
MARKETS・5 HOURS AGO
The Motley Fool

A Robinhood listing would mean more to Shiba Inu.
MARKETS・9 HOURS AGO
The Motley Fool

Here's why Ethereum has lost over 30% in two months.
STOCKS・6 HOURS AGO

Investing Ideas: 2 Fintech Stocks to Buy on the Dip

These proven winners should handily outperform the world's hottest cryptocurrency.
STOCKS・9 HOURS AGO
The Motley Fool

Investors seem to be giving up on a catalyst that could have sent Loopring to the moon.
COMMODITIES & FUTURE・1 DAY AGO

Here's Why SoFi's Bank Charter Is Driving the Stock Higher

The fintech disruptor is soaring after the news, and for good reason.
MARKETS・39 MINUTES AGO
The Motley Fool

Should You Buy the Crypto Dip? 3 Questions to Ask Yourself First

Right now could be a smart buying opportunity, but crypto isn't right for everyone.
STOCKS・8 HOURS AGO
The Motley Fool

Why Bakkt Holdings Stock Surged, Then Slumped on Wednesday

The cryptocurrency trading and storage company scored a big win, but investors shrugged.
STOCKS・2 HOURS AGO
The Motley Fool

Block is down 43% over the last 12 months and is trading well below its competition in the digital payments atmosphere.
STOCKS・1 DAY AGO

Down roughly 42.5% in the last six months, PayPal's stock may now offer multibagger potential.
STOCKS・1 DAY AGO
The Motley Fool

3 Reasons to Buy Block, and 1 Reason to Sell

This growing fintech company still has plenty of irons in the fire.
MARKETS・1 DAY AGO
The Motley Fool

The "flippening" isn't working out the way that Ethereum bulls envisioned.
MARKETS・1 DAY AGO
The Motley Fool

Why Are Bitcoin, Ethereum, and Dogecoin Down Today?

Crypto traders have come out of the long weekend with their bear hats on today.
MARKETS・1 DAY AGO
The Motley Fool

Adobe and PayPal are two strong companies with stock worth buying that happens to be on sale.
STOCKS・1 DAY AGO
The Motley Fool

Here's What You Need to Know About Visa in 2022

The payment processing powerhouse is coming off an unusually challenging year.
BUSINESS・1 DAY AGO
The Motley Fool

It's time to reconsider this former market beater.
STOCKS・2 DAYS AGO
asapland.com

What Does It Mean To Peg Someone?

The definition of peg someone is to fix someone’s value or worth at a particular amount. To peg someone can also mean to assign someone to a specific category or group. For example, you might peg someone as introverted if they display characteristics typically associated with introversion. When it...
BUSINESS・3 DAYS AGO