It's hard to ignore the signs that Bitcoin (CRYPTO: BTC) is gaining mainstream acceptance. Retailers from cinema chains to grocery stores and others are starting to accept cryptocurrencies for payments. According to a Blockdata report, Bitcoin processed 62% more transactions by dollar value than PayPal (NASDAQ: PYPL) in 2021. Now, investors can benefit from bitcoin's potential without ever owning a coin directly, thanks to bitcoin mining stocks. 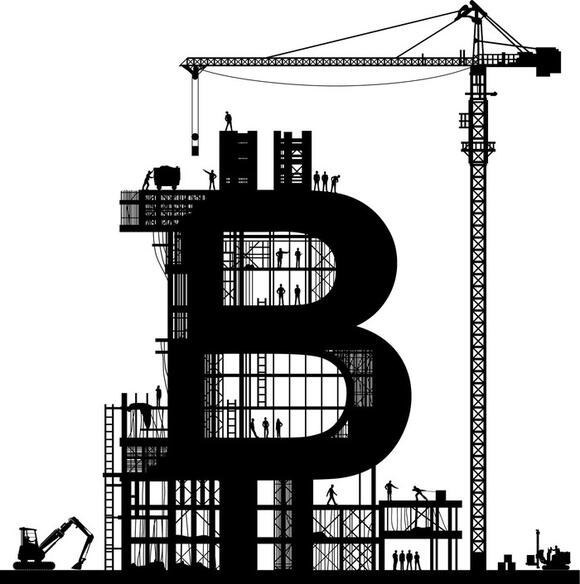 We'll  look at each company's operations, efficiency, potential growth, and a few intangibles. The company with the highest score at the end should take the pole position for investors to do further research.

The first comparison we'll make between the three companies is their current in-service mining power, measured by exahashes per second. More power means faster calculations. Since the reward for bitcoin mining is based on solving a complex mathematical problem, the faster to the finish line, the better.

Since the Argo figure comes from the end of October, and both Hut 8 and Riot are from the middle of November, we know this is a current comparison. Riot scores a 3, Hut 8 gets a 2, and Argo gets a 1.

A current leader is important, but it's at least as important for investors to know who might lead in the future. Each mining company is forthright about what machines they are buying and what they expect their hash rate to be in the future. 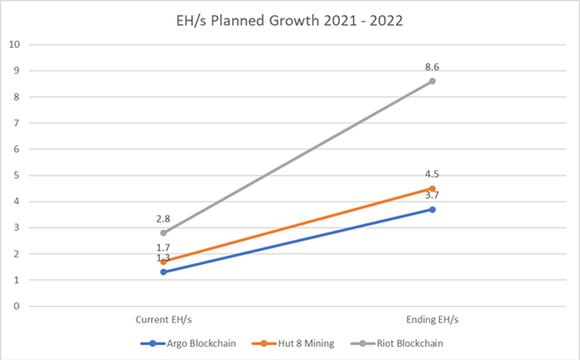 At first, this appears to be a decisive victory for Riot. However, investors need to remember that each company's growth rate must also be considered.

Riot comes out ahead in both growth percentage and its final predicted EH/s rate. However, Argo actually expects to grow its mining rate faster than Hut 8. For this calculation, Riot scores a 3, Argo gets a 2, and Hut 8 gets a 1.

With the price of bitcoin over $50,000, it's easy for investors to forget about the cost each miner pays to generate their profits. The most efficient miner makes more money per bitcoin, so potential shareholders should pay close attention to this metric as well. Mining companies use average cost per bitcoin mined as a point of comparison.

In a somewhat surprising twist, the company with the smallest existing and planned EH/s rate is also the most efficient. Argo cam post such a low cost partly thanks to the company's focus on renewable energy sources. The company's facility in Quebec Canada primarily uses hydroelectric power, while its site in Texas takes advantage of the area's extensive wind and solar power. Going green for Argo's power needs is also providing more green for the company's bottom line. This metric gives Argo a 3, Riot a 2, and Hut 8 a 1.

There are a few other considerations for investors that might not be obvious without some digging. Argo seems to have some catching up to do. The company has the smallest starting and smallest planned EH/s rates. However, Argo has begun construction of a new bitcoin mining facility it calls Helios, in Dickens County, Texas, that could change the company's future.

The Helios facility will ultimately have access to up to 800 megawatts  of power. If Argo were to use this entire amount, its Helios facility would become the largest bitcoin mining  facility in North America. A power source this size would allow Argo to go far beyond the 3.7 EH/s that it has planned over the next year or so. This massive potential gives Argo a score of 3.

Hut 8 has two intangibles that investors should keep an eye on. First, the company has 10,000 highly efficient GPUs by NVIDA (NASDAQ: NVDA) that are being installed. These units are mining at a total cost of under $3,000 per bitcoin. Given that Hut 8 has the highest average cost per bitcoin of the three companies, this should help improve efficiency. Second, the mining company's CFO, Shane Downey, said, "We have already surpassed our goal of 5,000 bitcoin held in reserve." This is the largest amount of the three companies and could provide additional potential profits if the price of bitcoin continues to rise. The company's huge bitcoin reserve gives it a score of 2.

Where Riot is concerned, the company presently uses about 200 megawatts of its power to mine bitcoin for other institutions. Riot runs the machines, pays out bitcoin to the other companies, and collects a percentage, plus enough to cover its costs. This decision technically lowers Riot's risk: It will cover its costs, and receive a profit, even if the price of Bitcoin declines. However, using 200 megawatts of the 750 megawatts at North America's largest bitcoin mining facility means nearly 27% of Riot's largest asset is working for someone else. The inability to directly mine with 200 megawatts of power means Riot scores a 1 for this section.

The tally shows Riot scores the highest, based primarily on its current and projected lead in mining power. The company's lead in these two segments gave Riot half of its points.

Each of these companies has the potential to be a good investment, with the obvious caveat that their values will be closely tied to the price of bitcoin. If you believe that bitcoin will continue to rise in the future, but want an alternative to holding the coin, this initial scorecard suggests starting your research with Riot Blockchain .

10 stocks we like better than Riot Blockchain, Inc
When our award-winning analyst team has a stock tip, it can pay to listen. After all, the newsletter they have run for over a decade, Motley Fool Stock Advisor , has tripled the market.*

They just revealed what they believe are the ten best stocks for investors to buy right now... and Riot Blockchain, Inc wasn't one of them! That's right -- they think these 10 stocks are even better buys.

Luckin Coffee and Curiosity Stream are simply too cheap to ignore.
STOCKS・21 HOURS AGO
The Motley Fool

Bloomberg says Nvidia's Arm deal is doomed -- and that could be great news.
STOCKS・20 HOURS AGO
The Motley Fool

Both companies are trading at 52-week lows, but there's reason for optimism ahead.
STOCKS・20 HOURS AGO

These beaten-down tech plays could go on bull runs thanks to massive catalysts.
STOCKS・23 HOURS AGO
The Motley Fool

These top tokens are starting to claw their way back.
MARKETS・19 HOURS AGO
The Motley Fool

Investors want to hear what Elon Musk has to say.
STOCKS・16 HOURS AGO
The Motley Fool

While Wall Street resets expectations around higher interest rates, investors are jumping back in.
STOCKS・20 HOURS AGO

A subsidiary's IPO went even better than expected.
STOCKS・17 HOURS AGO
Entrepreneur

5 Top Penny Stocks To Buy Now According To Reddit

DraftKings could earn $1 billion or more -- if Morgan Stanley is right.
STOCKS・18 HOURS AGO
The Motley Fool

Not one, but two analysts cut their price targets on the popular stock Wednesday morning.
STOCKS・14 HOURS AGO

Buy the best when America is on sale.
STOCKS・23 HOURS AGO
The Motley Fool

The "big money" on Wall Street seems to be dumping Tesla. The question is, why?
STOCKS・21 HOURS AGO
The Motley Fool

As a long-term investor, what should you do if the stock market is crashing?
STOCKS・23 HOURS AGO
The Motley Fool

Is Nvidia Stock a Buy Without ARM?

It seems the acquisition of ARM will not go through, but that isn't so bad for Nvidia.
STOCKS・21 HOURS AGO
The Motley Fool

Are metaverse cryptocurrencies like The Sandbox too good to be true?
STOCKS・16 HOURS AGO