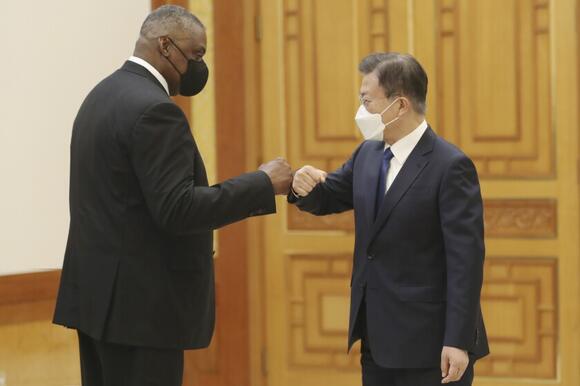 Austin's stern comments after annual security talks with South Korea, a key U.S. ally, are a window into one of the Biden administration's top foreign policy worries: How should Washington and its partners respond to a Chinese military that is getting stronger — both in firepower and in confidence — as it pursues an end of American dominance in Asia?

China sees much of Asia as its natural sphere of influence. But many in the region warn of a pattern of Chinese interference, accompanied by moves to acquire the weapons needed to dominate its rivals. Austin's comments were directed at China's July test of a hypersonic weapon capable of partially orbiting Earth before reentering the atmosphere and gliding on a maneuverable path to its target.

Experts say the weapons system is clearly designed to evade U.S. missile defenses, although China insisted it was testing a reusable space vehicle, not a missile.

“We have concerns about the military capabilities that [China] continues to pursue, and the pursuit of those capabilities increases tensions in the region,” Austin said about the hypersonic weapons test.

“We’ll continue to maintain the capabilities to defend and deter against a range of potential threats" to the U.S. and its allies, he said.

The Pentagon on Monday released the results of a global posture review that calls for additional cooperation with allies to deter “potential Chinese military aggression and threats from North Korea.”

Last month, Gen. Mark Milley, chairman of the Joint Chiefs of Staff, said the U.S. was also working on hypersonic weapons . But there is worry in Washington that it is lagging behind China and Russia in pursuing these types of weapons. Russia said Monday that its navy successfully tested a prospective hypersonic cruise missile.

Hypersonic weapons, which fly at speeds in excess of Mach 5, or five times the speed of sound, could pose crucial challenges to missile-defense systems because of their speed and maneuverability. But some experts argue that hypersonic weapons would add little to America’s ability to deter war and worry that they could trigger a new, destabilizing arms race .

He said he agreed with South Korean Defense Minister Suh Wook that the North's growing weapons program “is increasingly destabilizing for regional security." Austin said the allies remained committed to a diplomatic approach to North Korea.

Suh said the two agreed on a document updating joint contingency plans in the event of a war on the Korean Peninsula to reflect changes in North Korean threats and other conditions. He did not elaborate on the document's details.

North Korea’s nuclear arsenal is believed to have grown significantly in recent years .

After a series of high-profile missile and nuclear tests in 2016-17, North Korea claimed to have the ability to launch nuclear strikes on the U.S. homeland. According to a 2018 South Korean estimate, North Korea has built up to 60 nuclear weapons.

Despite severe economic hardships related to the pandemic, North Korea has continuously rebuffed U.S. offers to resume disarmament talks, saying that Washington must first abandon its hostility. The Biden administration maintains that international sanctions on North Korea will stay in place until the country takes concrete steps toward de-nuclearization.

The U.S. stations about 28,500 soldiers in South Korea to deter potential aggression from North Korea. During Thursday’s meeting, Austin highlighted a U.S. commitment to maintain the current level of forces, according to a joint statement.

The alliance, forged during the 1950-53 Korean War, was tested in recent years as then-President Trump threatened to pull U.S. troops out of South Korea if Seoul did not drastically increase its financial support for them. Trump also repeatedly complained of the cost of regular military drills between Washington and Seoul.

Such concerns have eased since President Biden took office. But the alliance still faces challenges, such as Seoul’s historical disputes with Japan, another key U.S. regional ally, and its hesitation to join U.S.-led initiatives targeting China, its biggest trading partner.

Austin and Suh pledged to continue trilateral cooperation involving Japan. But they didn’t elaborate on how South Korea and Japan could overcome tensions stemming largely from Tokyo’s 1910-45 colonization of the Korean Peninsula.

The test "confirmed the accuracy, safety, and operational effectiveness of this weapon system being produced," according to the North Korea's state news agency.
MILITARY・15 HOURS AGO
WBOY 12 News

North Korea said Tuesday it had conducted a test-firing of “tactical guided missiles,” a day after South Korea’s military detected the North launching two ballistic missiles into the sea.
MILITARY・17 HOURS AGO
The Independent

Grappling with pandemic difficulties and U.S.-led sanctions over his nuclear ambitions, North Korean leader Kim Jong Un could be reviving his 2017 playbook of nuclear and missile brinkmanship to wrest concessions from Washington and his neighbors.North Korea’s short-range missile launches on Monday were its fourth round of missile tests this month and signaled a refusal to be ignored by the Biden administration, which has focused more on confronting bigger adversaries such as China and Russia.The tests could also reflect a growing urgency in its need for outside relief after its economy decayed further under the severe sanctions and two...
MILITARY・15 HOURS AGO
Newsweek

China, Russia and Iran Team Up for Joint Naval Exercises

Russia's Defense Ministry said vessels from its Pacific fleet had arrived in the Persian Gulf for exercises that were first announced in 2021.
MILITARY・3 HOURS AGO

Taiwan is modernizing its military, but data compiled by the US Defense Department shows that China's advantage is only growing.
MILITARY・7 HOURS AGO
americanmilitarynews.com

Chinese leader Xi Jinping threatened on Monday that a confrontation with China would only result in “catastrophic consequences.”. During a speech before the virtual-only Davos World Economic Forum, Xi said the world needs to move away from what he called a “Cold War mentality.”. “Our world today is...
CHINA・1 DAY AGO
The Independent

Chinese President Xi Jinping called Monday for greater world cooperation against COVID-19 and pledged to send an additional 1 billion doses of vaccine to other countries, while urging other powers to discard a "Cold-War mentality” at a time of rising geopolitical tensions — a not-so-veiled swipe at the United States The Chinese leader touted his country's efforts to share vaccines, fight climate change and promote development at home and abroad as he delivered the opening speech of a virtual gathering hosted by the World Economic Forum. The online event is being held in place of its annual January meeting...
POLITICS・1 DAY AGO
albuquerqueexpress.com

The British defence secretary said ?light anti-armour? munitions were sent to Kiev amid rising tensions with Moscow. The United Kingdom has begun sending light arms to Ukraine, Britain's top military official said, though he claimed the weapons ?pose no threat to Russia? after repeated allegations that Moscow is planning to invade its neighbour.
MILITARY・13 HOURS AGO

SEOUL, South Korea (AP) — North Korea on Monday fired two suspected ballistic missiles into the sea in its fourth weapons launch this month, South Korea’s military said, with the apparent goal of demonstrating its military might amid paused diplomacy with the United States and pandemic border closures. South Korea’s Joint Chiefs of Staff said […]
MILITARY・1 DAY AGO
The Independent

Months before President Joe Biden announced the U.S.’s complete withdrawal from Afghanistan last year, Washington’s watchdog warned that the Afghan air force would collapse without critical American aid, training and maintenance. The report was declassified Tuesday.The report by the Special Inspector General for Afghanistan Reconstruction John Sopko, submitted to the Department of Defense in January 2021, underscores that American authorities had been alerted that Afghanistan’s air force did not have the capabilities to survive after a U.S. withdrawal. In particular, the report points to U.S. failure to train Afghan support staff, leaving the air force unable to maintain its...
AEROSPACE & DEFENSE・14 HOURS AGO
Scientific American

China’s test flight of a long-range hypersonic glide vehicle late last year was described in the media as close to a “Sputnik moment” in the race to develop new ultrafast maneuvering weapons. But even as senior U.S. military officials publicly fretted about missiles that are, for the moment at least, effectively invincible, the Pentagon was quietly making strides on an entirely novel way to help shoot down these weapons.
AEROSPACE & DEFENSE・15 HOURS AGO
KTLA

Fomin said it would take through Feb. 9 to deploy weapons and personnel for the Allied Resolve 2022 drills, which are expected to take place Feb. 10-20.
MILITARY・2 HOURS AGO
WEKU

North Korea is testing hypersonic weapons. Should the West be worried?

The U.S., Russia and China all have them. And now, North Korea claims to as well: hypersonic weapons. These aerial vehicles go a step further than the kind of ballistic missiles that Pyongyang has periodically tested over the years. They can fly fast and maneuver in ways that make them extremely difficult to detect and destroy.
MILITARY・3 DAYS AGO
defense.gov

Chinese President and Communist Party General Secretary Xi Jinping has declared his country will have the world’s strongest military by mid-century. China is militarizing the South China Sea, has Taiwan in its crosshairs and is seeking to project power on a global scale both militarily and through its mercantilist debt-trap diplomacy. A revisionist power seeking to shape the world in its authoritarian image, Beijing represents a clear and present danger to the U.S. and our allies.
POLITICS・5 DAYS AGO
dallassun.com

US, Japan to collaborate on developing hypersonic missile defenses: Blinken

Washington [US], January 7 (ANI/Sputnik): The United States and Japan will soon sign an agreement that will enable bilateral cooperation on developing defenses against hypersonic missiles and on new space-based capabilities, US Secretary of State Antony Blinken said. "We're launching a new research and development agreement that will make it...
MILITARY・11 DAYS AGO
Fox News

North Korea announced the completion of a successful hypersonic weapons test, adding to the list of agitators that continue to advance while America has stumbled in an area that has fast become the most important indicator of modern military capability. The Wednesday launch marks the second successful test of a...
MILITARY・11 DAYS AGO
Metro International

SECRETARY BLINKEN: Well, let me kick things off by just again saying welcome to everyone. Welcome to my good friend, the foreign minister, the defense minister, Secretary of Defense. In 2021, the very first foreign trip that Secretary Austin and I made was to Japan. And as we said at...
U.S. POLITICS・11 DAYS AGO