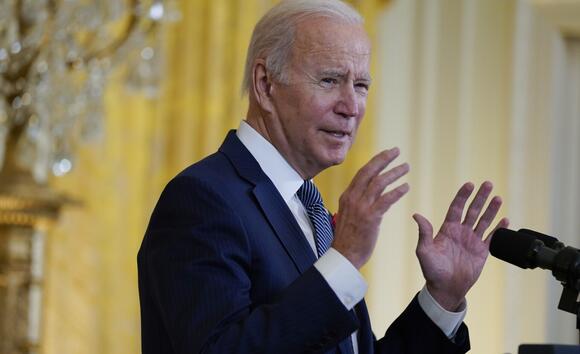 The White House is bracing for the Supreme Court to chip away at the landmark 1973 abortion case Roe v. Wade as the justices consider the constitutionality of a Mississippi law banning the termination of pregnancies after 15 weeks.

The majority's inclination toward upholding the Mississippi law, evident during oral arguments Wednesday, has rattled advocates of legal abortion but has some Democrats believing it will boost the party in next year's midterm elections.

The Supreme Court overturning or undermining Roe , which established that pregnant women have a constitutional right to choose to have an abortion, could derail Republican aspirations for the House and Senate in the 2022 midterm cycle, according to former Democratic consultant Christopher Hahn. The party in power has historically performed poorly in such elections and Democrats are defending small majorities.

"The White House and the entire Democratic Party needs to treat any decision made by the court that reduces a woman’s right to choose as if the 'Republican Court' has destroyed choice in America," Hahn told the Washington Examiner . "Make every Republican candidate across the nation answer for the court's actions. Let them try to explain any nuance in the ruling."

But Democrats must clarify their abortion-rights talking points when speaking to voters, according to Hahn, host of the Aggressive Progressive podcast.

"Democrats fail when their messaging requires explanation," he said. "This case could give the Democrats a simple message that could motivate women, particularly younger women, to vote in record numbers."

Democrats now openly embrace their support for legal abortion instead of relying on diluted phrases such as "reproductive rights." That includes President Joe Biden, the country's second Catholic commander in chief. Biden's stance even caused him personal embarrassment last summer when conservative bishops moved to deny him Holy Communion over the issue.

Republicans are successfully appealing to many parents by empathizing with their concerns about school mask and vaccine policies, as well as the teaching of critical race theory. An example is Gov.-elect Glenn Youngkin's win last month in Virginia. But abortion access in states such as Mississippi and Texas, which has passed its own heartbeat law, combined with more tangible warnings regarding the perceived dangers of a conservative-dominated Supreme Court may undo Republican gains with the demographic.

"A woman’s right to make our own health care choices will be a defining issue in the 2022 midterms, and for voters it will reinforce the stakes of protecting and expanding our Democratic Senate Majority with the power to confirm or reject Supreme Court justices," Democratic Senatorial Campaign Committee spokeswoman Jazmin Vargas wrote in an email blast to reporters.

The White House has remained relatively mum about the Mississippi abortion law, enacted in 2018 and contested in Dobbs v. Jackson Women's Health Organization . That is despite the potential advantage of a political distraction amid the emergence of the omicron COVID-19 variant, rising consumer prices, and Biden's flagging poll numbers.

But when asked about the Mississippi law multiple times this week, White House press secretary Jen Psaki regurgitated the same prepared statement concerning Biden's support of Roe and calls for Congress to codify Planned Parenthood v. Casey's pre-fetal viability abortion threshold through the House-passed Women’s Health Protection Act. But she did repeatedly describe the Mississippi measure as "blatantly" violating the right "to safe and legal abortions."

"The Department of Justice filed a brief in the case and will participate in the oral argument. And he is committed to working with Congress to codify the constitutional right. That's what he's focused on," she said.

Biden told reporters he did not listen to Wednesday's Mississippi abortion law Supreme Court proceedings, reiterating that Roe was "the rational position to take." Psaki later confirmed Biden would be briefed on the Dobbs oral arguments, the ramifications of which, Democrats claim, will affect 36 million women in 26 states.

"The tragedy of abortion ends the life of a child who, by 15 weeks, has a heart that pumps 26 quarts of blood per day and can feel pain — and deeply wounds her mother," she said.

For Megan Wold, a former Ohio deputy solicitor general and clerk to Supreme Court Justice Samuel Alito, the bench hinted Wednesday that Roe had been wrongly decided, that Roe had been undercut by scientific facts and legal evolution, that abortion is not mentioned in the Constitution, and that the country does not have an abortion rights history or tradition.

"These views support overruling Roe ," she said. "No justice proposed a new standard to replace Roe , and six justices suggested a willingness to eliminate Roe’s key viability holding. It is clear that the court is likely to substantially weaken Roe or, more likely, to overrule Roe altogether."

Senate Republicans are already taking aim at a police reform executive order that President Joe Biden is expected to sign in the coming days, warning that the order would effectively defund state and local police departments.
PRESIDENTIAL ELECTION・22 HOURS AGO
WashingtonExaminer

House Majority Leader Steny Hoyer on Tuesday said he agrees with President Joe Biden’s assertion that the results of the midterm elections may not be legitimate to Democrats if they are unable to pass two election and voter overhaul measures.
PRESIDENTIAL ELECTION・12 HOURS AGO
Newsweek

"Perhaps this means some of our colleagues will miss out on lucrative investment opportunities. We don't care," the lawmakers said.
CONGRESS & COURTS・1 DAY AGO

Democrats staked everything on a doomed effort to end the filibuster and pass voting legislation. The results were no surprise.
PRESIDENTIAL ELECTION・21 HOURS AGO
Reuters

WASHINGTON, Jan 24 (Reuters) - The U.S. Supreme Court on Monday declined to hear a challenge by Republican lawmakers to pandemic-related proxy voting rules set by Speaker Nancy Pelosi in the Democratic-led House of Representatives that were tailored to limit exposure to COVID-19. The voting rules, implemented in May 2020, allow members of the 435-seat House to serve as proxies for colleagues in quarantine or otherwise unable to cast floor votes in the chamber. House Republican leader Kevin McCarthy and other lawmakers had asked the Supreme Court to reverse a lower court decision that allowed the remote voting rules to remain in effect.
CONGRESS & COURTS・1 DAY AGO
Washington Examiner

Adam Laxalt isn’t overpromising. The Nevada Republican, his party’s leading candidate for Senate in the Silver State, offered a modest menu of agenda items he plans to pursue should the GOP win a majority of seats in the chamber in the midterm elections. Topping the list? Using control of the floor, and key Senate committees, to conduct aggressive oversight of President Joe Biden and his administration. Laxalt also would encourage the Republican majority he hopes to usher in to look deeper into the Russia investigation that consumed Washington during most of former President Donald Trump’s term.
PRESIDENTIAL ELECTION・1 DAY AGO
NewsRadio 740 KTRH

A letter from the office of Attorney General Jason Miyares sent to the Supreme Court cited a "change in Administration" in its new stance.
VIRGINIA STATE・1 DAY AGO
WashingtonExaminer

A federal court has blocked Alabama's Republican-backed congressional map, saying it is likely in violation of the Voting Rights Act.
ALABAMA STATE・15 HOURS AGO
WashingtonExaminer

The California-based jurist also became the first to reject a Trump ally’s challenge to the panel’s structure.
CONGRESS & COURTS・5 HOURS AGO
Newsweek

On Sunday the GOP lawmaker was asked about a proposed plan shared in the Trump White House to seize voting machines after the 2020 election.
CONGRESS & COURTS・2 DAYS AGO
Los Angeles Times

Activists warn that the failure to deliver on promises to Black voters could hurt Democrats in the midterm election.
LOS ANGELES, CA・1 DAY AGO
Idaho Capital Sun

WASHINGTON — A bipartisan group of senators is exploring legislation to overhaul how Congress counts Electoral College votes, but backers of stalled voting rights legislation are lukewarm on the effort as a substitute. The Electoral Count Act is an obscure law that has come under recent scrutiny, a year after the Jan. 6 attack on […] The post With voting rights stalled, some senators mull an update to the Electoral Count Act appeared first on Idaho Capital Sun.
PRESIDENTIAL ELECTION・1 DAY AGO

The court said it will take up lawsuits claiming that Harvard University, a private institution, and the University of North Carolina, a state school, discriminate against Asian American applicants.
CONGRESS & COURTS・1 DAY AGO
14news.com

INDIANAPOLIS (AP) - Indiana lawmakers are holding off on pursuing major anti-abortion action as they await a U.S. Supreme Court decision that could roll back abortion rights across the country. That Supreme Court decision isn’t expected until after the state legislative session ends in March. Indiana lawmakers might ask...
INDIANA STATE・1 DAY AGO
WTOP

Rally for abortion rights at US Supreme Court

On the 49th anniversary of Roe v. Wade, the Supreme Court decision that legalized the right to abortion in the U.S., supporters of those rights gathered in front of the high court Saturday in response to legal threats that could overturn the 1973 decision as early as this spring. The...
CONGRESS & COURTS・3 DAYS AGO
Boston Globe

Anti-abortion marchers gather with an eye on the Supreme Court

Anti-abortion protesters descended on Washington from across the country Friday for the annual March for Life, a ritual that this year took on a tone of hopeful celebration as they anticipated the Supreme Court overturning the decision that established a constitutional right to abortion a half-century ago. The marchers have...
PROTESTS・4 DAYS AGO