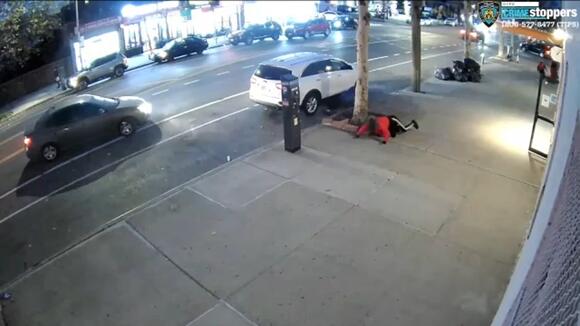 There is new video of a drive-by shooting in the Bronx as the search intensifies for the gunmen. Surveillance video shows a dark SUV passing by when suddenly someone opens fire from the car and people duck for cover. It happened last month on Burke Avenue in Williamsbridge. 18-year-old Aneki Chung was killed. A 15-year-old boy was shot in the left buttock, a 59-year-old woman was hit in the left thigh, and a 26-year-old man was struck in the thigh and ribcage. They're in stable condition. Police believe the victim may have been the intended target. Last month, data showed the number of shooting victims in the Bronx was up a staggering 147% compared to 2019, before the pandemic. In the 47th Precinct, it's up 201%. Bronx District Attorney Darcel Clark says a major issue surrounding many of these cases is the fact that teenagers caught with guns are now charged in Family Court and are usually released very quickly. ALSO READ | President Biden to make at-home rapid tests free in new COVID plan

The 25-year-old gunman wrote his name in the sign-in book before the shooting.
BRONX, NY・12 HOURS AGO
ABCNY

A college student from the Bronx has been indicted for selling 73 weapons and high-capacity magazines to an undercover NYPD officer.
BRONX, NY・4 HOURS AGO
ABCNY

A 17-year-old was caught with a gun on a subway train in Times Square Wednesday afternoon.
MANHATTAN, NY・2 HOURS AGO

Police are searching for an NYU professor who has been missing for several days.
MANHATTAN, NY・2 HOURS AGO

They worked diligently to inform desperate families of their loved ones' fates, in the hopes that the confirmation of a parent's, sibling's or child's passing can somehow help start the grieving process.
BRONX, NY・6 HOURS AGO
ABCNY

NYPD officer Wilbert Mora, who was shot and his partner killed while responding to a domestic call in Harlem, has died from his injuries, NYPD Commissioner Keechant Sewell announced Tuesday.
MANHATTAN, NY・1 DAY AGO
ABCNY

Hundreds of people came to the 32 Precinct on Wednesday night, packing 135th Street in Harlem and standing in the cold, to share the burden for a moment, of a pain that will last a lifetime.
NEW YORK CITY, NY・2 HOURS AGO
ABCNY

Police are ramping up their efforts to catch a suspect connected to a shooting that left a baby girl shot in the face in the Bronx last week.
BRONX, NY・2 DAYS AGO
ABCNY

A 13-year-old boy was charged with arson, reckless endangerment and criminal mischief for allegedly setting the fire that burned through an East Village card shop earlier this month.
PUBLIC SAFETY・1 DAY AGO

A mother and her new son reunited Wednesday with a Suffolk County police officer who, with the help of a paramedic, helped deliver and save the baby born on Christmas Eve.
SUFFOLK COUNTY, NY・4 HOURS AGO
ABCNY

The cause of death of Lauren Smith-Fields, a 23-year-old woman who was found dead after a date, has been revealed.
BRIDGEPORT, CT・1 DAY AGO
ABCNY

Two juveniles are facing charges for a fire that shut down part of the Garden State Parkway for several hours.
OCEAN COUNTY, NJ・3 HOURS AGO