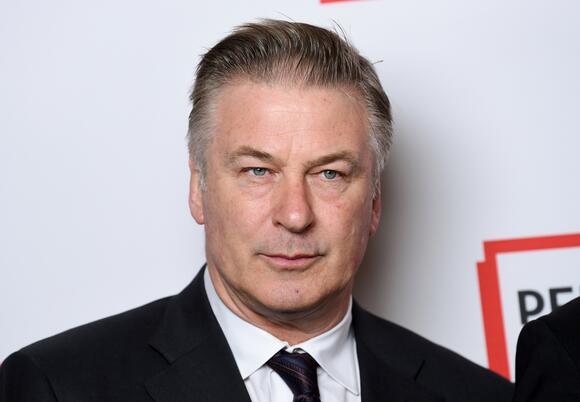 Actor Alec Baldwin has given his first interview since he accidentally shot and killed a crew member on the set of his latest movie Rust.

The Beetlejuice star, 63, sat down with George Stephanopoulos for an hour-long special with ABC which will air at 1am UK time on Wednesday December 2 and be made available to stream later on Hulu.

Cinematographer Halyna Hutchins, 42, was fatally struck and director Joel Souza, 48, injured when the actor discharged a live bullet from a gun he believed wasn’t loaded on October 21.

Describing the interview as the most “intense” he had ever conducted, Stephanopoulos said: “He [Alec] was so raw.

“As you can imagine he was devastated, but he was also very candid. He was very forthcoming, he answered every question.

“He talked about Halyna Hutchins, meeting her family as well. And he talked in detail about what happened on set that day.”

No criminal charges have been filed in the case, but investigations are still ongoing.

Following the shooting, Alec issued a statement saying he had “no words to convey my shock and sadness”.

Describing mother-of-one Halyna as a “wife, mother and deeply admired colleague of ours”.

He added: “I’m fully cooperating with the police investigation to address how this tragedy occurred and I am in touch with her husband, offering my support to him and his family.

“My heart is broken for her husband, their son, and all who knew and loved Halyna.”

He has since called for police to monitor the safe use of weapons on movie sets in future to avoid a tragedy like this ever happening again.

“Every film/TV set that uses guns, fake or otherwise, should have a police officer on set, hired by the production, to specifically monitor weapons safety,” he wrote on social media.

Reservoir Dogs actor Michael Madsen has said he is “heartbroken and overwhelmed with grief and pain” after his son Hudson was found dead at the age of 26 in Hawaii. Hudson Madsen – who was the godson of Hollywood director Quentin Tarantino – “died by a gunshot wound to the head in a suspected suicide,” a spokeswoman for the Department of the Medical Examiner in Honolulu confirmed to The Sun.
HAWAII STATE・6 HOURS AGO
newschain

A woman stabbed to death in a London street by a man who was then run over and died had previously been in a relationship with her suspected killer. The Metropolitan Police said it had established that Yasmin Chkaifi, 43, and 41-year-old Leon McCaskre, both from Maida Vale in west London, were known to each other.
PUBLIC SAFETY・6 HOURS AGO
newschain

The public are “very sick of being taken for fools” over MPs’ second jobs, Ian Hislop has told a sleaze watchdog. The editor of Private Eye magazine told the Commons Committee on Standards on Tuesday that MPs “need to redefine the term lobbying” and that current proposals for change need to be “harder”.
POLITICS・4 HOURS AGO
Outsider.com

The armorer who worked on the movie Rust is saying that star Alec Baldwin is partly responsible for a death on set because he failed to show up for a training session. Hannah Gutierrez-Reed, the armorer for Rust, filed a civil lawsuit in a New Mexico court on Wednesday. The suit alleges that Baldwin did not respond to a request for training. The session was a week before bullets fired from Baldwin’s prop gun killed cinematographer Halyna Hutchins and wounded director Joel Souza.
SANTA FE, NM・12 DAYS AGO

"Rust" armorer Hannah Gutierrez-Reed has sued Seth Kenney, the man who provided the prop ammunition used by the production team of the Alec Baldwin movie, which was halted following a fatal shooting in October. Gutierrez-Reed filed the lawsuit Wednesday in New Mexico, citing the state's unfair-trade-practices law. She also sued...
PUBLIC SAFETY・12 DAYS AGO
Insider

The armorer for “Rust,” the low-budget movie whose filming halted after a crew member was killed and another was injured when a gun discharged a live round instead of a dummy, is suing the production’s ammunition supplier, alleging that he introduced “dangerous products” onto the set.
PUBLIC SAFETY・12 DAYS AGO
Newsweek

A lawyer for the movie star argued in a court filing that a civil suit over the accidental shooting should be thrown out.
CELEBRITIES・18 HOURS AGO

An attorney for Alec Baldwin said Friday that the actor turned his phone over to police in Suffolk County, New York, earlier in the day as part of the investigation into last year’s deadly shooting on the set of the movie “Rust,” The New York Times reported.
SANTA FE COUNTY, NM・11 DAYS AGO
KNX 1070 News Radio

There is no peace for Alec Baldwin. The American actor had already entered a maelstrom of investigation and controversy over the death of the director of photography of his film Rust, killed by a bullet from a gun in Baldwin's hand. Now it adds a new piece in the actor's...
CELEBRITIES・2 DAYS AGO
Law & Crime

Actor Alec Baldwin has turned his cellular telephone over to the authorities in connection with the deadly shooting of cinematographer Halyna Hutchins and the wounding of director Joel Souza on the set of the film “Rust.”. “The Baldwin cell phone was been turned over to Suffolk County law enforcement...
SUFFOLK COUNTY, NY・10 DAYS AGO

More than two months after the script supervisor on Rust filed a lawsuit against Alec Baldwin and other producers for the actor’s fatal shooting of cinematographer Halyna Hutchinson on the New Mexico set of the indie Western, the defendants want a California judge to dismiss the action. “Nothing about Plaintiff’s allegations suggest that any of Defendants, including Mr. Baldwin, intended the Prop Gun to be loaded with live ammunition,” responded Baldwin, Rust Movie Productions, LLC,, El Dorado Pictures, Inc., Ryan Donnell Smith, Langley Allen Cheney, Thomasville Pictures, LLC, Anjul Nigam, Matthew DelPiano, and Cavalry Media, Inc., who were “erroneously sued as...
20 HOURS AGO
The Hollywood Reporter

Alec Baldwin on Friday gave his phone to Santa Fe authorities who are investigating the fatal Rust production shooting that took place last October, his civil attorney, Aaron Dyer, of Pillsbury Winthrop, confirmed to The Hollywood Reporter. The update comes on the heels of the Santa Fe County Sheriff’s Office on Thursday issuing a message to the media that said, even though a search warrant had been issued nearly a month prior, the actor had yet to relinquish his device. Baldwin said last week that he was complying with the investigation into last fall’s deadly production shooting. “Any suggestion that I am not...
CELEBRITIES・11 DAYS AGO
Middletown Press

Alec Baldwin’s attorneys argued in a filing on Monday that a lawsuit stemming from the “Rust” shooting in October should be thrown out because the shooting was a workplace accident. The filing marks the first time that Baldwin’s lawyers have laid out a legal argument for why...
CELEBRITIES・18 HOURS AGO
NBC News

Alec Baldwin and his fellow "Rust" producers asked a Los Angeles judge on Monday to dismiss a lawsuit by the movie's script supervisor, who claims she was hurt in last year's fatal on-set shooting. While defense lawyers agreed that the Oct. 21 death of cinematographer Halyna Hutchins, 42, was a...
LOS ANGELES, CA・51 MINUTES AGO
Radar Online.com

Bob Saget’s suspected cause of death has been revealed and cops believe the late comedian “suffered a heart attack or a stroke” due to the circumstances in which they found his body. Article continues below advertisement. According to Daily Mail, authorities that arrived at Saget’s Ritz-Carlton hotel...
CELEBRITIES・14 DAYS AGO
Black Enterprise

A Long Island couple has been charged with hate crimes and child endangerment after launching an unprovoked verbal attack against a biracial couple and their 10-year-old son on a commuter train. According to WNBC, the incident occurred as Liz Edelkind, who is Afro-Latina, was heading home from a Knicks game...
SOCIETY・2 DAYS AGO
hotnewhiphop.com

The rumours are false. A photo that's been circulating online claiming that 73-year-old Samuel L. Jackson met Martin Luther King Jr. back in 1966 has made its way onto one Tina Lawson's Instagram page, and upon seeing it, the actor didn't hesitate to let Mama T know that she was spreading some fake news.
CELEBRITIES・1 DAY AGO
Newsweek

Candace Owens Reacts to 'SNL' Spoof: 'I Am Much Better Looking'

Candace Owens was parodied by Ego Nwodim during the cold open on "Saturday Night Live" over the weekend—and the conservative commentator was not impressed.
TV & VIDEOS・1 DAY AGO