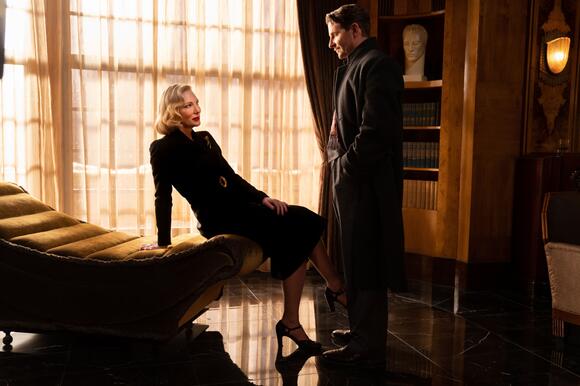 Based on William Lindsay Gresham’s 1946 novel of the same name, “Nightmare Alley” stars Bradley Cooper as Stan Carlisle, an ambitious carnival entertainer with a knack for manipulating people with a few select phrases. Carlisle’s abilities and showmanship launch him into the upper classes of society, where he encounters Cate Blanchett’s Dr. Lilith Ritter, a suspect and highly dangerous psychiatrist.

Variety’s own executive editor Ramin Setoodeh’s immediate reaction featured high praise for Cooper’s lead performance, declaring a belief that the actor will earn a fifth Oscar nomination for his performance.

Variety awards editor Clayton Davis also praised Cooper, along with del Toro’s direction. He also declared that the year’s production design Oscar race essentially has a bow on it at this point. Read his complete initial takeaways here .

Film critic Robert Daniels was much less favorable, calling the look of the film “so murky” that he had trouble making out actors’ faces.

Fandango’s Erik Davis highlighted the scenes between Cooper and Blanchett as particularly impressive.

You can expect to see the next installment of Daniel Craig as Private Detective Benoit Blanc in “Knives Out 2” streaming on Netflix this fall. Variety has learned exclusively that writer and director Rian Johnson’s hotly-anticipated sequel is expected to release in theaters and the streaming platform in the last quarter of 2022. In addition, the film is expected to also make a festival run before its release, although it’s unknown which ones it’s expected to debut at. With this added layer, we can expect the sequel to be a possible awards hopeful for Netflix next year. The streamer is expected...
MOVIES・2 DAYS AGO
Variety

From ‘Zombieland’ to Sundance: Jesse Eisenberg on Teaming With Emma Stone for ‘When You Finish Saving the World’

For Jesse Eisenberg’s feature directorial debut, “When You Finish Saving the World,” he crafted a quirky family dramedy about a woman Evelyn (Julianne Moore) and her “oblivious” son Ziggy (Finn Wolfhard) as they struggle to connect. The movie debuted Thursday as an opening day selection for Sundance 2022 nearly one year to the day after Eisenberg sat down with Variety to discuss the Audible originals drama on which this script was based. Joining the Variety Virtual Sundance Studio presented by Audible, the emerging filmmaker looked back on the project’s journey from audio production to A24 release. “I feel so fortunate to have...
MOVIES・2 DAYS AGO
Variety

Crafting a Noirish ‘Nightmare Alley’ Through Costume and Production Design

Guillermo del Toro’s visually striking “Nightmare Alley” straddles two worlds, the grit and grime of a post-World War II carnival that has suffered wear and tear traveling from city to city, before jumping a few years ahead to a lush and sleek world. Connecting the two is Bradley Cooper’s Stanton Carlisle, a down on his luck guy who uses the carnival as his ticket out. As Stanton plots a new con, he encounters Cate Blanchett’s Dr. Lilith Ritter, a mysterious psychiatrist, in whom he might have met his match. Renowned for his lavish world-building, del Toro called on production designer Tamara Deverell...
DESIGN・10 DAYS AGO
Esquire

Bradley Cooper's twisty noir thriller Nightmare Alley includes a full frontal nude scene, which the Oscar-nominated star describes as "a big deal" for him. Directed by Mexican maestro Guillermo del Toro (The Shape of Water), the sequence itself is built around his character Stan Carlisle's sexual encounter with Toni Collette's Zeena Krumbein.
MOVIES・6 DAYS AGO

Dir: Guillermo del Toro. Starring: Bradley Cooper, Cate Blanchett, Toni Collette, Willem Dafoe, Richard Jenkins, Rooney Mara, Ron Perlman. 15, 150 minutes.In Nightmare Alley, our hero Stanton Carlisle – an ambitious carny played by Bradley Cooper – is haunted by the perpetual feeling that he’s being watched. Not by the ghosts that habitually inhabit Guillermo del Toro’s films – be it the spindly limbed phantoms of Crimson Peak, or the boy with the shattered head staring out from the shadows in The Devil’s Backbone. Nor is it God, or at least in the traditional sense. No, the thing that’s...
MOVIES・3 DAYS AGO
Deadline

SPOILER ALERT: This story contains plot details from Searchlight’s Nightmare Alley. EXCLUSIVE: The difference in stumping for awards in years past, compared to now — when a Covid encore with the catchy Omicron variant sent everyone back to their homes — is evident when Nightmare Alley star Bradley Cooper, director Guillermo del Toro and producer J. Miles Dale materialize on a Zoom call. It becomes clear they haven’t seen each other in person for a while. “There he is, El Capitan,” Cooper says to del Toro; Dale tells Cooper they have to talk about Alvin Williams, the Toronto Raptors player-turned-TV commentator who...
MOVIES・6 DAYS AGO
The Hollywood Reporter

Before his first film even was released, Guillermo del Toro already was pursuing his own version of Nightmare Alley, the 1947 film noir classic from 20th Century Fox, which ultimately would become his 11th feature. It would take 25 years, an Oscar best picture win and the culmination of a bromance and a romance before the opportunity would materialize — as it finally has in this year’s darkly seductive awards season contender starring Bradley Cooper and Cate Blanchett. In 1998, del Toro, then only 29, had just wrapped production on his debut feature, the genre-bending horror drama Cronos, starring Ron Perlman,...
MOVIES・5 DAYS AGO
The Hollywood Reporter

Guillermo del Toro’s neo-noir Nightmare Alley is one of a handful of high-profile films to crash and burn at the box office as of late, earning just $9.4 million since its December release despite the star power of Bradley Cooper, Cate Blanchett, Rooney Mara and Toni Collette. According to Cooper, that did not level anyone involved and he’s hopeful the Searchlight film will soon find an audience when it heads to streaming on HBO Max and Hulu. “It wasn’t a shock to any of us how it landed theatrically,” Cooper tells Kim Masters, who is also an editor-at-large for The Hollywood Reporter, during a...
MOVIES・2 DAYS AGO

Bradley Cooper dishes on baring it all in 'Nightmare Alley,' plus more celeb news

Bradley Cooper says he spent six hours filming 'Nightmare Alley' bathtub scene with nothing on. No clothing for six hours on-camera? No problem. That was the thinking Bradley Cooper tried to maintain when it came to appearing on the big screen without a stitch on in his new thriller, "Nightmare Alley." The Oscar nominated star opened up about his bathtub scene with Toni Collette on the KCRW podcast "The Business" featuring The Hollywood Reporter's Kim Masters. "I remember reading in the script and thinking, he's a pickled punk in that bathtub and it's to story. You have to do it," he recalls. While he got through the shoot, he also admitted that wearing nada "in front of the crew for six hours" on what turned out to be Toni's first day on set "… was just like, 'Whoa,' it was pretty heavy." Still, Bradley said, "there was nothing gratuitous about it," so he was OK with just how much would be revealed onscreen (read: pretty much everything). "Nightmare Alley" is in theaters now.
CELEBRITIES・5 DAYS AGO
Sentinel-Echo

Best Picture and Best Director Oscar winner Guillermo del Toro (“The Shape of Water”) cowrote and directed this throwback to film noir, a thriller based on William Lindsay Gresham’s novel. Set in the 1940’s, the feature stars Bradley Cooper as Stanton Carlisle, a down-on-his-luck guy who joins...
MOVIES・8 DAYS AGO
The Hollywood Reporter

Directing movies has always been a high-wire act, and it has only gotten harder in this unpredictable era of the pandemic. In mid-November, six filmmakers behind some of the year’s most celebrated cinematic work gathered for The Hollywood Reporter’s Director Roundtable: Pedro Almodóvar (Parallel Mothers), Kenneth Branagh (Belfast), Jane Campion (The Power of the Dog), Guillermo del Toro (Nightmare Alley), Asghar Farhadi (A Hero) and Reinaldo Marcus Green (King Richard). The group, who convened in person in L.A., talked about giving up guns on sets, mining personal traumas and why they wished they had “slept more, laughed more and breathed...
MOVIES・3 DAYS AGO
USA TODAY

All the best movies we saw at Sundance Film Festival, ranked (including 'We Need to Talk About Cosby')

Among the rich selection of stills and footage in the unexpectedly affecting Lucy and Desi, there’s an image that might strike you with its likeness to the film’s director, Amy Poehler. The photo captures Lucille Ball, in one of her daffier getups, beaming at the camera: a wide-eyed, beautiful clown. More than 70 years after I Love Lucy transformed the airwaves, many people working in television can trace their inspiration to that trailblazing sitcom and its beloved stars. But Poehler brings a particularly powerful sense of connection and understanding to her debut documentary. Like Ball, she’s a funny woman with...
THEATER & DANCE・1 DAY AGO
The Guardian

‘I don’t think we should talk about me’: a visit to David Strathairn’s own Nightmare Alley

One of the stars of Guillermo del Toro’s new noir, he has been a captivating character actor for 40 years, but is rarely put up before the press. We find out why …
MOVIES・10 DAYS AGO
Insider

The majority of superhero movies coming in 2022 are sequels, including "Aquaman 2," "Doctor Strange 2," and "Across the Spider-Verse."
MOVIES・20 HOURS AGO
IndieWire

Rian Johnson’s hugely anticipated mystery sequel “Knives Out 2” may be headed to theaters, Netflix, and fall festivals toward the end of 2022. Variety has reported that the follow-up to the 2019 Academy Award nominee (Best Original Screenplay) is “expected to release in theaters and the streaming platform in the last quarter of 2022” and will “also make a festival run before its release.” The original “Knives Out” was released by Lionsgate in the fall of 2019 following a world premiere at the Toronto International Film Festival. The movie earned $311 million on a budget of $40 million. Reached for comment, Netflix...
MOVIES・2 DAYS AGO
Deadline

Editors note: Deadline’s Read the Screenplay series debuts and celebrates the scripts of films that will be factors in this year’s movie awards race. “I wanted to render a classic story in a very alive and contemporary way – I wanted people to feel they are watching a story pertinent to our world,” says Nightmare Alley director and co-writer Guillermo del Toro, whose penchant for stylishly crafted horror stories took a turn for the decidedly noir with his latest film. Del Toro and his writing partner Kim Morgan, an accomplished film journalist and essayist, turned to author William Lindsay Gresham’s fatalistic 1946 novel...
MOVIES・10 DAYS AGO
KTLA

Guillermo del Toro talks about his new film “Nightmare Alley.” He talked about how long it takes to make a movie, and said the Bradley Cooper and Cate Blanchett duo in the film is out of this world. “Nightmare Alley” is in theatres now. “Nightmare Alley: Vision in Darkness and Light” is in select theaters […]
MOVIES・9 DAYS AGO
Middletown Press

Guillermo del Toro on the Crafts of ‘Nightmare Alley’

Guillermo del Toro’s “Nightmare Alley” is physically stunning, which the director says “sustains the darkness of the movie by keeping the audience almost hypnotized by those textures. If you make a beautiful movie that’s not telling a story or defining a character, it’s just decorative. That’s the difference between eye protein and eye candy.”
MOVIES・3 DAYS AGO