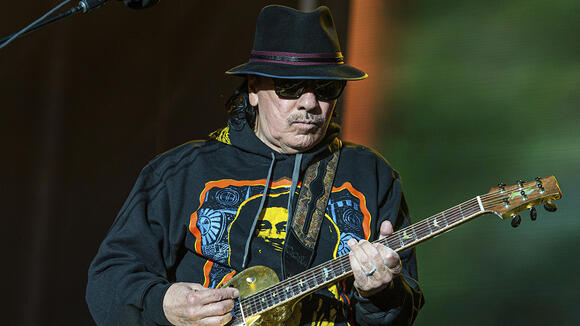 Carlos Santana has canceled several of his upcoming Las Vegas concerts to recover from a successful unscheduled heart procedure. No other specifics have been given on the nature of the operation.

Santana made the announcement through a video posted to his official Twitter on Wednesday afternoon.

“Last Saturday, I had an incident where my wife had to take me to the hospital because I had this thing happening in my chest,” Santana said. “So when we went there we found out we needed to take care of it.”

Santana also affirmed his plans to return for his performances scheduled for January 2022.

“I’m going to be taking time out for a little bit to make sure I replenish and I rest and I catch up with my health, so when I play for you I play the way I’m used to and I give you 150%,” Santana continued.

The 74-year-old guitarist had been set to perform a series of concerts at the Mandalay Bay Resort and Casino through the end of the year.

“Carlos is doing fantastic and is anxious to be back on stage soon,” Michael Vrionis, president of Universal Tone Management, said in a statement. “He profoundly regrets that this ‘speed bump’ necessitated the cancellation of his upcoming performances.”

In addition to his Las Vegas shows, the rock band Santana released its 26th album, “Blessings and Miracles,” in October. Distribution was handled by Starfaith LLC and BMG Rights Management, while Santana produced. The album features a collaboration with Rob Thomas, marking a reunion between the two musicians 20 years after the release of their hit “Smooth.”

The Sandbox, a decentralized gaming virtual world and a subsidiary of Animoca Brands, has partnered with Warner Music Group to create the first music-themed world in The Sandbox gaming metaverse. Described as a combination of musical theme park and concert venue, the Warner Music Group “LAND in The Sandbox” will feature concerts and musical experiences featuring WMG artists. The strategic partnership marks The Sandbox’s first deal with a major music company and Warner Music Group’s first entry into the NFT metaverse realm. Under the partnership, the Sandbox will work with WMG to develop innovative music experiences taking place in LAND. To mark the occasion, The Sandbox will hold a LAND sale in...
MUSIC・1 DAY AGO
Variety

Why Is Adele’s Las Vegas Residency in Limbo, and Can She Still Pull It Out of the Bag? 10 Burning Questions

Not every Las Vegas residency has to be a cast-of-dozens, song-and-dance extravaganza, although most obviously are. When Garth Brooks settled into a five-year residency at the Wynn that lasted for 187 shows between 2009 and 2014, it was just him, wife Trisha Yearwood and (for all of the shows but the final handful) a single acoustic guitar. Many fans have said they would have been happy if a voice and guitar was all the spectacle Adele provided during her now-postponed residency that was slated to run at Caesars Palace from January through April. Right about now, as she faces some tough...
LAS VEGAS, NV・1 DAY AGO
Variety

Moon Projects, former TikTok music chief Mary Rahmani’s joint venture with Republic Records, has unveiled its first signing: Los Angeles-based singer-songwriter Em Beihold, whose song “Groundhog Day” became a viral smash last year. Today she’s released the single and video “Numb Little Bug,” which she first teased on TikTok a few months back. “I try to write happy sing along pop about sad topics,” Beihold, 23, says. “I go for the lyrics or chords you wouldn’t necessarily expect.” She adds about the song, “Last year, all of my dreams were coming true. Everything I wanted was happening, but somehow I didn’t feel anything....
MUSIC・3 HOURS AGO
Fox5 KVVU

EXCLUSIVE: Carlos Santana makes comeback on & off the Vegas stage

Our Mike Davis chats with the legendary Carlos Santana about his big return to the Vegas stage after a health scare & the advice he got from Miles Davis. You can see Santana perform at the House of Blues Las Vegas now with show dates through May.
LAS VEGAS, NV・1 DAY AGO

We won’t call Carlos Santana’s return to the stage a “comeback,” exactly. The guitar great never really halts the creative process. But he sounds reborn today, having survived a serious health scare just as his latest album, “Blessings and Miracles,” has been released. Santana’s...
LAS VEGAS, NV・2 DAYS AGO
news3lv.com

Las Vegas (KSNV) — Carlos Santana will be performing for the first time in 2022 after the singer had to cancel his December shows due to health concerns. Santana's residency, An Intimate Evening with Santana: Greatest Hits Live, will return Wednesday, January 26, to the House of Blues stage inside Mandalay Bay Resort and Casino.
LAS VEGAS, NV・4 DAYS AGO
Las Vegas Weekly

When Reuben Nieves became a homeowner with the help of Habitat for Humanity Las Vegas, he didn’t just get a place of his own. He also received a one-of-a-kind handmade bench—a sittable sculpture, really—thanks to Carlos Santana and the legendary rocker’s home venue, House of Blues.
LAS VEGAS, NV・1 DAY AGO
Las Vegas Sun

Wednesday, Jan. 19, 2022 | 8:49 a.m. Some tickets for Adele’s upcoming concerts are more expensive than seats at this year’s Super Bowl. The Grammy Award-winning singer is set to play 24 shows at the Colosseum at Caesars Palace on Fridays and Saturdays from Jan. 21 until April 16 as part of a “Weekends with Adele” residency in Las Vegas.
LAS VEGAS, NV・9 DAYS AGO

After postponing the start of her Las Vegas residency, Adele surprised a group of disappointed fans with a video call at Caesars Palace. James Mason Fox told CNN someone from the singer's team held up a phone on Friday so Adele and fans in a pop-up merchandise shop could see each other. He said only a few people were allowed in the shop at a time because of Covid-19 protocols.
LAS VEGAS, NV・5 DAYS AGO
Telegraph

On a personal level, it's hard not to feel desperately sorry for Adele. The 92-second video she posted in Instagram last night explaining her decision to postpone her Las Vegas residency – due to start today – laid bare her disappointment. Her eyes blotchy and her voice cracking, the 33-year-old singer said preparation for the show has been “absolutely destroyed” by Covid and what she called delivery delays.
MUSIC・7 DAYS AGO
thesource.com

Adele fans who were hoping to catch her during her Las Vegas residency might find themselves waiting even longer (or indefinitely) to see her live. The pop star’s Caesar’s Palace “Weekends With Adele” residency, which was supposed to start in mid-January has already faced a series of delays and now maybe reportedly delayed even further due to issues with sports agent boyfriend Rich Paul.
CELEBRITIES・9 HOURS AGO
spectrumnews1.com

LOS ANGELES (CNS) — Following a postponement due to a surge in COVID-19 cases, the 64th Grammy Awards ceremony was moved Tuesday from downtown Los Angeles to Las Vegas. The Grammys were originally set for Jan. 31 at Crypto.com Arena, but the Recording Academy opted to postpone the event amid rising COVID cases in the Los Angeles area.
LOS ANGELES, CA・9 DAYS AGO

A tearful Adele announced on social media that her Las Vegas show is not ready. The singer's Las Vegas residency, "Weekends with Adele," at Caesars Palace was scheduled to begin on Friday. Adele said the show has been hampered by delivery delays and COVID-19. "Half my crew and team are...
LAS VEGAS, NV・7 DAYS AGO
98online.com

Metallica‘s upcoming concert in Las Vegas just got a bit spookier. Ice Nine Kills are set to open the show, which takes place February 25 at Sin City’s Allegiant Stadium. In a tweet, the horror-themed metallers share that they’re “beyond honored” to be supporting the “Enter Sandman’ legends.
LAS VEGAS, NV・8 DAYS AGO
Glamour

Adele was’'t going to leave fans empty-handed after being forced to postpone her Las Vegas residency last-minute. “She messaged me and it’s my singing Instagram. So I was like, ‘What? This can’t be real. This is a forwarded thing from her team,’” TikTok user @JamesMasonFox thought when he received a personal DM from Adele suggesting he visit her store at Caesars Palace for a gift. “I said, ‘Is this really mama Adele or her team?’”
LAS VEGAS, NV・5 DAYS AGO

50 Years of The Manhattan Transfer: The Quintessential Vocal Group Kept Harmony Alive When the World Needed It Most

Looking back at the last 50 years, you’d be hard-pressed to say the world has gotten a lot more harmonious since then — not figuratively, in the geopolitical sphere, and certainly not literally, in a popular music world that’s become a slave to the rhythm, and to singers’ disinterest in sharing a mic, much less a spotlight. But you can’t fault the Manhattan Transfer for not doing their part — and just about everyone else’s, too — to keep the spirit of harmony alive ever since the group formed in 1972. At their modern-day shows, attendees may not know whether to...
MUSIC・19 HOURS AGO