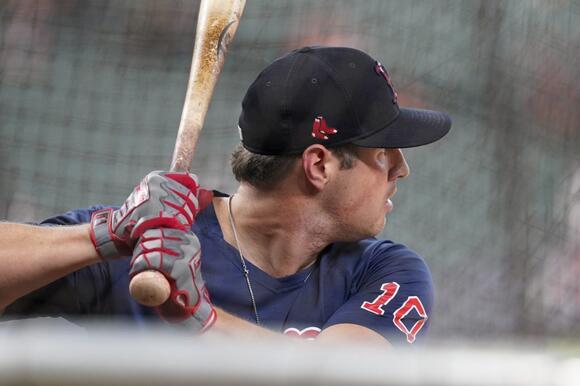 With MLB headed for a lockout in the matter of hours, the Boston Red Sox pulled off a surprising deal. They moved Hunter Renfroe to the Milwaukee Brewers for three players, including former Sox outfielder Jackie Bradley Jr. late Wednesday evening.

ESPN’s Jeff Passan was the first to report the news with Will Sammon of The Athletic breaking down the bounty heading back to Boston.

According to Sammon, that includes the aforementioned Bradley Jr. as well as prospects David Hamilton and Alex Binelas.

The 29-year-old outfielder is coming off a career-best 2021 campaign that saw him hit .259 with 31 homers, 96 RBI and a robust .816 OPS. Renfroe finished second among Red Sox players in homers and third in RBI. Back in 2019 with the San Diego Padres, he blasted a career-best 33 homers.

For Milwaukee, the idea is to upgrade an offense that led to its downfall after winning the National League Central. Not a single member of the lineup hit as much as 30 homers or drove in more than 86 runs. Renfroe would have led the team in each category.

A former All-Star player for the Red Sox, Bradley Jr. played in Boston from 2013-20. He struggled at the plate in his only season with the Brewers — hitting a career-low .163 in 387 at-bats. However, Bradley remains one of the best defensive outfielders in the game.

As for the prospects Boston received, Hamilton ranked as the 16th-best Brewers prospect at the time of the trade with Binelas coming in at 17th, per MLB.com .

An infielder by trade, Hamilton hit .258 with eight homers and 43 RBI in stops at Single-A and Double-A last season. Meanwhile, Binelas posted a .309 average with nine homers and 29 RBI in the lower MILB levels.

The New York Mets and 2022 National League batting champion Jeff McNeil have agreed on a contract extension that will
NEW YORK CITY, NY・18 HOURS AGO
Sportsnaut

The decision by Los Angeles Angels owner Arte Moreno to not sell the franchise, could reportedly cost the team any
LOS ANGELES, CA・15 HOURS AGO
Sportsnaut

The Tampa Bay Rays announced a three-year extension with a club option on a fourth season for right-handed reliever Pete
SAINT PETERSBURG, FL・11 HOURS AGO
Sportsnaut

When Golden State Warriors general manager Bob Myers joined the team as assistant GM back in 2011, the organization had
OAKLAND, CA・2 DAYS AGO
Sportsnaut

The Chicago Bulls could be active before this year’s NBA trade deadline, however, the players they move may not be
CHICAGO, IL・1 DAY AGO
FastBreak on FanNation

Anthony Davis is on the injury report for Saturday's game.
BOSTON, MA・19 MINUTES AGO
Sportsnaut