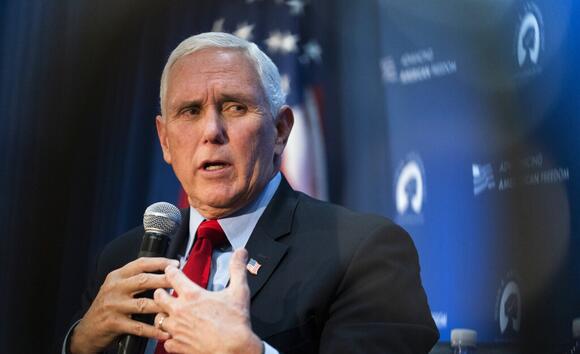 Former Vice President Mike Pence shrugged off the anger of Trump supporters who are upset he did not attempt to challenge the results of the 2020 election while presiding over Congress in January as lawmakers tallied the electoral votes in President Joe Biden's victory despite pressure by his boss at the time.

After admitting months ago he may never see "eye to eye" with former President Donald Trump regarding the events of Jan. 6, Pence expanded that explanation to address his break with the "MAGA" faithful even as he called them "our" supporters. This happened during a new interview in which Pence left the door wide open to a presidential run in 2024 which could very well pit him against Trump or another Trump-endorsed candidate should Trump decide not to run.

He was asked by CBN News journalist David Brody to respond to those who call him "traitor." Brody noted that these complaints are so consistent that he hears them every day.

"On Jan. 6, I said that I believe there were irregularities about which I was concerned, and I wanted them to have a fair hearing before the Congress," Pence said. "But from the founding of this nation forward, it's been well established that elections are to be governed at the state level and that the only role that Congress has is to open and count the electoral votes that are submitted by states across the country — no more, no less than that."

Referring back to the 2017 inauguration, Pence said he took an oath to "support and defend" the Constitution.

"The Bible says in Psalm 15 that he 'keeps his oath even when it hurts,' and on that day, I could relate to that sentiment. But I wanted to keep my oath to the Constitution," he said. "I know in my heart of hearts that on that day, we did our duty, under the Constitution. ... I don't know if President Trump and I will ever see eye to eye on that day or that many of our most ardent supporters will agree with my decision that day. But I know I did the right thing."

Despite immense pressure from allies, Pence sent a letter to Congress saying that he did not have the power to reject Electoral College votes, dealing a blow to Trump’s hopes to deny a presidential victory to Biden as he insisted the contest was fraught with fraud and irregularities. Election officials on the federal and state level, including in Trump's own government, have said they found no evidence of widespread fraud to support his claims of a stolen election.

Trump insisted to Fox News that he and Pence maintain a "good relationship," even after the 45th president criticized his former No. 2 for lacking the "courage" to try and stop lawmakers from certifying the Electoral College vote in favor of now-President Biden, a process disrupted by rioters who stormed the U.S. Capitol on Jan. 6. The siege of Congress is now under investigation by a House select committee, which has subpoenaed several of Trump's closest advisers.

Although some of the rioters were threatening Trump's vice president, chanting "hang Mike Pence" at the Capitol, Pence has downplayed the events of the riot as "one day in January" and critiqued the media's focus on it as being a way to distract from the Biden administration's "failed agenda."

Pence, who started a political nonprofit organization after leaving the West Wing in January and recently began hosting a podcast, has signaled that he will make his 2024 decision irrespective of his former boss and may choose to challenge him in the Republican primary with a travel schedule this year that includes early voting states including Iowa and New Hampshire .

He said during the interview that he is putting his time into supporting conservatives in the midterm elections next year, but did not dismiss the notion that he could run for office again in the future.

"For right now, my focus is entirely on doing everything in my power to support the conservative cause and win back the Congress and statehouses all across this country in 2022. We'll let the future take care of itself after that, and I promise to keep you posted. ... And then in the years ahead, I'm confident that our party and our movement will choose the right leaders and the right voices to make our country strong and great once again," Pence said.

Trump not only put this guys and his families life at risk but he also ruined his political career and this moron still kisses Trumps Ass , unbelievable .

I wonder if Mike Pence ever thinks that if his party would have done the right thing during the impeachment hearings that he would be the president still 🤔......

Yeah embrace them, as they wanted to embrace you with a rope around your neck. How brainwashed do you have to be to embrace someone who wants to and has attempted to - kill you?

When House Speaker Kevin McCarthy (R-CA) sits down with President Joe Biden on Wednesday, they may meet in the Oval Office, but the California Republican will be walking into the lion’s den.
CALIFORNIA STATE・2 DAYS AGO
WashingtonExaminer

A quarter of GOP say they'd back Trump as independent in 2024, threatening to split vote: Poll

More than a quarter of Republican voters say they’d back former President Donald Trump in the 2024 election even if he runs as a third-party candidate — possibly threatening to split the GOP electorate as the party seeks to win back the White House.
FLORIDA STATE・2 DAYS AGO
TheDailyBeast

MAGA-boosting radio host John Fredericks has turned on Donald Trump, telling the former president in no uncertain terms on Tuesday that “nobody cares” about his petty media feuds and “grievances” anymore.Fredericks, a longtime supporter of the twice-impeached ex-president, largely took issue with how Trump has seemingly ignored political issues while focusing his attention on far-fetched lawsuits and complaints about “fake news.” Additionally, Fredericks grumbled about Trump privately backing Ronna McDaniel in her successful re-election bid for Republican National Committee chair.“President Trump is going to do what he wants,” Fredericks declared in a clip first flagged by Raw Story. “I think...
2 DAYS AGO
WashingtonExaminer

Essential Connecticut workers who worked through the COVID-19 pandemic are set to receive a payment worth up to $1,000 on Feb. 1.
CONNECTICUT STATE・1 DAY AGO
WashingtonExaminer

Larry Elder considering 2024 White House run, says it wouldn't be to 'derail' anyone

Conservative talk radio host Larry Elder hinted he might get involved in a White House run in 2024, nearly two years after he unsuccessfully ran for governor of California.
CALIFORNIA STATE・2 DAYS AGO
WashingtonExaminer

Several members of Congress have been targeted by thieves who nabbed hundreds of thousands of dollars combined from their campaign accounts as fraudsters and cybercriminals continue to exploit entities involved in federal systems for major gains, according to Federal Election Commission filings reviewed by the Washington Examiner.
KANSAS STATE・1 DAY AGO
Victor

The Social Security Administration's first round of retirement payments for the month of February, worth up to $4,194, will begin being issued to recipients starting next week.
9 HOURS AGO
WashingtonExaminer

"There is no other way to talk to these fools," State Duma member and former military commander Andrey Gurulyov said.
3 DAYS AGO
WashingtonExaminer

The White House was adamant it would not negotiate with House Republicans regarding the debt limit before President Joe Biden sits down with House Speaker Kevin McCarthy (R-CA).
WASHINGTON STATE・1 DAY AGO
WashingtonExaminer

House Rep. Andy Biggs (R-AZ) is set to file articles of impeachment against Department of Homeland Security Secretary Alejandro Mayorkas, reviving his previous efforts to charge the Biden administration official for his handling of illegal immigration at the southern border.
ARIZONA STATE・1 DAY AGO