Kamala Harris braces for loss of another top aide 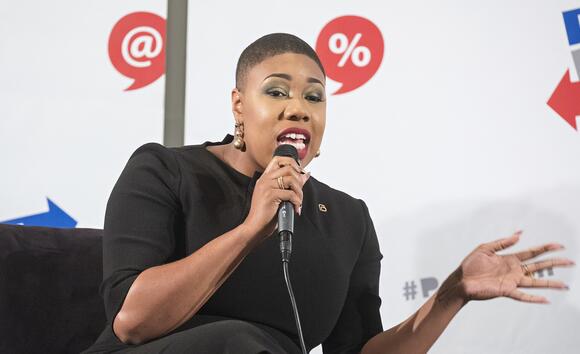 T he top adviser and chief spokeswoman for Vice President Kamala Harris, Symone Sanders, is set to resign from her position by the end of the year, a White House official confirmed late Wednesday. She is one of several top aides to leave the office less than a year into the Biden administration.

“Symone has served honorably for 3 years. First as a valuable member of the President’s 2020 presidential campaign, then as a member of his transition team and now deputy assistant to the President and senior advisor/chief spokesperson to the Vice President,” the official told the Washington Examiner in a statement. “Grateful to have her working through the end of the year.”

Word of Sanders's exit comes amid reports of turmoil between the West Wing, Harris’s office, and some of the vice president’s advisers.

Peter Velz, the vice president's director of press operations, is also leaving Harris's office "in the coming weeks," along with Vince Evans, deputy director of public engagement and intergovernmental affairs, according to the Washington Post .

Few of Harris's presidential campaign staff followed her to the White House, likewise from her Senate office to the campaign, and before that, from her California Attorney General's office to Washington. Former advisers have said that Harris is tough on her staff.

One former Harris adviser who remains close to the vice president told the Washington Examiner that Sanders’s departure was “not the least bit surprising” and cited her prominent public profile. “I’m not a fan of the ‘celebrity staffer,’ and I can’t imagine Kamala is either," the ex-adviser said.

This person added, “She needs people who bring down the collective blood pressure.”

In a letter to staff late Wednesday that was reported by Politico , Sanders wrote, “Shortly, Politico, CNN and lord know whoever else is going to report that I am leaving the office at the end of December. It’s true and I’m sorry you all found out like this."

She added: “I’m so grateful to the VP for her vote of confidence from the very beginning ... I am immensely grateful and will miss working for her and with all of you,” she added. “We are fighters. Our President and VP are fighters and I will continue to be on the team, fighting for them.”

Sanders did not immediately respond to a request for comment.

A prominent Democratic campaign operative before joining Harris’s team, Sanders advised Biden and served as a cable television surrogate for the now-president during the 2020 campaign. She was a rumored prospect for White House press secretary before the role went to Jen Psaki. Earlier, Sanders was the national press secretary for Vermont Sen. Bernie Sanders in the race to lead the 2016 Democratic Party ticket.

Harris and Biden both face low approval ratings amid concerns over rising inflation, gas and grocery prices, and issues surrounding the handling of COVID-19, issues that are prompting new scrutiny as Democrats begin looking toward the 2022 elections.

President Joe Biden’s top aides spent the first day of his second year in office wending through hours of cleanup that showed no sign of disappearing.
PRESIDENTIAL ELECTION・1 DAY AGO
WashingtonExaminer

Without a change in rules, the president's agenda is stalled.
PRESIDENTIAL ELECTION・1 DAY AGO
WashingtonExaminer

The consequences of Democrats devaluing citizenship and sovereignty.
IMMIGRATION・1 DAY AGO
Newsweek

Vice President Kamala Harris struck a defiant tone as Democrats’ bid to pass voting rights reforms failed to pass the Senate late Wednesday evening.“We are not giving up,” Ms Harris told The Independent. “We will not give up.” The Senate failed to pass voting rights on a 49 to 51 basis with Senate Majority Leader Chuck Schumer voting against it so as to bring up the bill later this year. Speaking to reporters earlier she said: “I’m here tonight because this is a historic night, and history is going to record – and watch, certainly – the votes that are taking place.“This...
PRESIDENTIAL ELECTION・2 DAYS AGO
USA TODAY

Sagging ratings, fractured Democrats, record inflation and a virus that won't go away: What's a president to do when things are going wrong?
PRESIDENTIAL ELECTION・2 DAYS AGO
Fox News

Biden goes over the top praising Kamala Harris; 'I love you'

President Biden Friday put on full display admiration for "partner" Vice President Kamala Harris claiming he could not imagine having anyone else serve by his side as questions about her performance grow. Biden's praise for Kamala came as the two of them delivered remarks at a virtual Democratic National Committee...
PRESIDENTIAL ELECTION・14 HOURS AGO
POLITICO

THE REBOOT — With his agenda stalled in Congress, President JOE BIDEN is switching strategies, “a stark admission that his approach to governing so far has fallen short,” NYT’s Michael Shear, Zolan Kanno-Youngs and Katie Rogers report. “Biden will retreat from the tangle of day-to-day negotiations...
POTUS・1 DAY AGO

Biden suggested the 2022 midterm elections might not be legitimate if voting rights legislation wasn't passed.
PRESIDENTIAL ELECTION・2 DAYS AGO
KFI AM 640

Westside motorists could encounter some afternoon rush-hour delays today thanks to an anticipated weekend stopover by Vice President Kamala Harris.
21 HOURS AGO
Newsweek

President Biden has said that Vice President Harris is "doing a good job" and would be on the presidential ticket.
PRESIDENTIAL ELECTION・2 DAYS AGO
Newsweek

"She's doing a great job," said the president during his Wednesday address.
PRESIDENTIAL ELECTION・2 DAYS AGO

SAN DIEGO (KUSI) – President Biden and VP Harris have been in office for a full year, but their administration seems to be failing on its biggest promises from the campaign. TIME Magazine even commemorated President Biden’s first year in office with a grim image depicting Biden ignoring everything except his plan to distribute free COVID-19 tests to Americans.
SAN DIEGO, CA・1 DAY AGO
101.1. The Wiz

President Joe Biden said in no uncertain terms that Vice President Kamala Harris will definitely be his running mate in 2024 and pushed back against the narrative that he may have let down Black voters to whom campaign promises have not been kept.
PRESIDENTIAL ELECTION・2 DAYS AGO
The Independent

Two rival septuagenarians - Donald Trump and Bernie Sanders - unknowingly combined to help create the most progressive generation in modern American history, according to a new account.Anger over the victory of Mr Trump in 2016, and the wild, enthusiastic support for Mr Sanders, now aged 80, in both that race and the one of 2020, helped in different ways to create a generation of young people - Generation Z - that was notably more progressive than their parents.Other key factors in creating this depth of liberal views, according to  John Della Volpe, polling director at the Harvard Kennedy School...
PRESIDENTIAL ELECTION・1 DAY AGO

During the 2020 Democratic Presidential primary, then-candidate Joe Biden was made fun of by his chief opponent, Senator Bernie Sanders, for believing he could persuade the Republican Party to negotiate with him in order to advance his agenda. Wednesday night, the Republican Party, coupled with Democratic Senators Joe Manchin and Krysten Sinema, destroyed hopes of […] The post Democrats fail to change filibuster, Republicans block voting rights bill appeared first on The Atlanta Voice.
PRESIDENTIAL ELECTION・2 DAYS AGO
POLITICO

DON’T CALL ME BERNIE — There’s a lot to unpack from President JOE BIDEN’s marathon press conference in the East Room, but let’s start with this statement deep into the 1-hour-and-51-minute event:. “You guys have been trying to convince me that I am BERNIE SANDERS....
PRESIDENTIAL ELECTION・2 DAYS AGO
Fox News

Much like the famed Hippocratic Oath, the job of a vice president is "First, do no harm." Ideally, a vice president should be supportive of her administration as a political goodwill ambassador that builds her party’s governing go right coalition. Unfortunately, for Kamala Harris, the Democrats, and the nation so far, Kamala Harris has been unsuited for the job and has endured many self-inflicted wounds en route to her historically low approval numbers.
PRESIDENTIAL ELECTION・2 DAYS AGO
Fox News