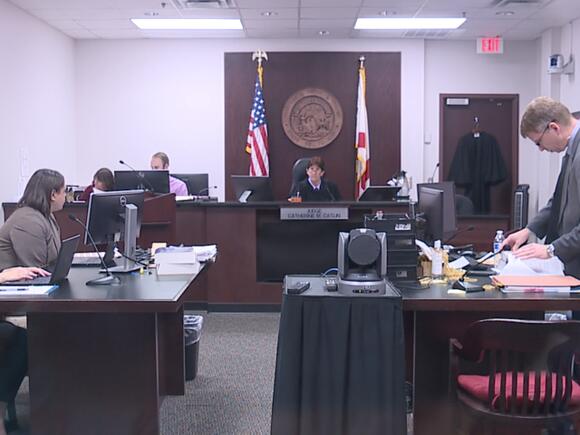 Robert Kessler didn't show up to his pre-trial hearing Wednesday.

"We will waive his right for this afternoon's hearing," said public defender Maria Dunker.

He's currently charged with second-degree murder and abuse of a dead body in connection to the death of Stephanie Crone-Overholts .

The judge's call for the day's hearing hinged on whether the prosecution could prove the crimes Kessler is accused of likely happened and that Kessler is a danger to the community.

Tampa police detective, Michael Kirkpatrick, was called up as a witness on behalf of the State Attorney's Office. On the stand, he testified that Kessler's phone was pinged by cell towers at the time witnesses say they saw him dumping things into Mckay Bay. He also said that law enforcement found blood in Kessler's home.

But it was a witness interview that Kirkpatrick says investigators did with Kessler's child, that ultimately turned the tide.
"She overheard her father telling Stephanie that she's gonna have to leave and Stephanie, I guess asked for $200 dollars to leave, or she wasn't [going to]," said Kirkpatrick

Kirkpatrick also said that Kessler's child told police the room she shared with Crone-Overholts had a "smell" after she was gone and that her dad "promised to redecorate" the room.

Kessler's defense team pushed back on most of the claims Kirkpatrick and Assistant State Attorney, Scott Harmon, made Wednesday.

"I think maybe there's one possibly two things that the detective testified to that he has personal knowledge of and none of those things is sufficient to prove that the crime of homicide was committed," said public defender Maria Dunker.

Dunker also asked that judge Catherine Catlin offer Kessler a high bond or to release him with an ankle monitor. But she ruled against that.

“This was a heinous act committed in his home where his child resides. In fact in the child’s bedroom. It’s a total lack of concern for human life," said 13th Judicial Circuit Court Judge Catherine Catlin.

It's important to note that despite the judge's statement about an "act being committed," Kessler has not been convicted of the charges against him.

In the end, Judge Catlin offered Kessler no option for pre-trial release on his charge of second-degree murder. She did, however, set bail at $7,500 for his charge of abuse of a dead body. But that bail amount was nullified by the no-bond order on his previous charge.

According to the Hillsborough County Sheriff's Office, Kessler was initially arrested for possession of cocaine with intent to sell or deliver on Nov. 22. Court records show that his other two charges were filed on Nov. 25.

According to Kessler's booking report, the "date of offense" for his second-degree murder charge, is listed as November 5.

A Bradenton man is behind bars after he shot another man dead during an argument, according to deputies.
BRADENTON, FL・3 DAYS AGO
ABC Action News WFTS

The Federal Bureau of Investigation Denver office issued a statement Friday saying that during their investigation, they did not identify any other individuals "directly involved" in Gabby Petito's death other than Brian Laundrie.
1 DAY AGO
ABC Action News WFTS

A Hillsborough county auto shop says someone is casing local parking lots and stealing a very expensive part from specific cars. And so far, they've hit at least 8 cars in the bay area.
2 DAYS AGO
ABC Action News WFTS

Tampa Police investigating 2 homicides that 'appear to be related'

Tampa Police are investigating two homicides within two miles of each other that the department says appear to be related.
6 DAYS AGO
ABC Action News WFTS

Escaped inmate police said could be head to Tampa is captured

Authorities are searching for an escaped inmate they say could be on his way to Tampa.
5 DAYS AGO

The Hillsborough County Sheriff's Office is investigating asking for help finding the man that robbed a bank in Carrollwood.
8 DAYS AGO
ABC Action News WFTS

Film crew teams up with law enforcement to shed light on PTSD, police

The film 115 Grains, shot right here in Tampa Bay, is based on the real life story of a police officer suffering from PTSD and the calls throughout his career that have impacted him.
5 DAYS AGO
ABC Action News WFTS

No injuries were reported following a house fire in St. Petersburg Monday night.
5 DAYS AGO

The DOJ reports that three Tampa Bay area men were arrested Jan 13. on felony charges related to the breach of the U.S. Capitol on Jan. 6, 2021.
8 DAYS AGO
ABC Action News WFTS

A COVID-19 outbreak in Tampa Bay Area jails has inmates worried that there are not enough safety measures in place.
8 DAYS AGO