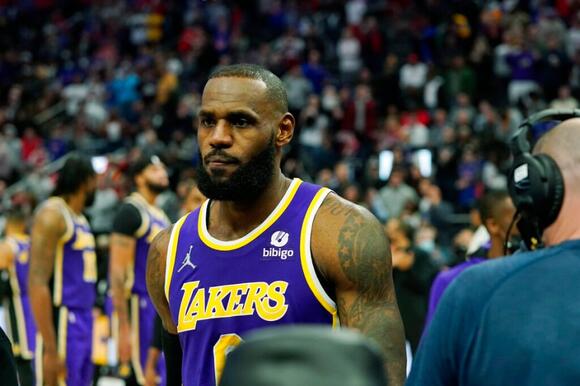 (WJW/AP) – LeBron James tweeted out that “something is REAL” fishy the day after he was placed in the NBA’s health and safety protocols and ruled out of Tuesday’s game against the Sacramento Kings.

According to reports from TMZ Sports , James tested positive for COVID-19. The reports said he was asymptomatic.

James took to Twitter Wednesday afternoon, but he didn’t specify what exactly he considers to be fishy, using several fish emojis.

The news that he is missing time came on the same day that the NBA underscored its previous recommendation, echoed by the National Basketball Players Association, that coaches and players who are vaccinated receive a booster shot as soon as possible.

Other NBA stars have already missed multiple games this season after testing positive, including Philadelphia’s Joel Embiid — who just missed three weeks while dealing with the virus.

Keep him on the bench. He is a distraction to the team and his far left views are destroying morale in the league. I suggest cutting him loose and then he can go to China and play with his comrades.

Does he believe that someone intentionally gave him Covid? What's fishy Lebron? The fact that you're vaccinated but still caught Covid? He all know that breakthrough transmission is possible. What's fishy?

awwwe, is somebody crying crocodile tears???? it must have been that racist Rittenhouse kid!!!!🤣🤣🤣🤣🤣and those are real tears of me dying laughing!!!!

OKLAHOMA CITY (AP) — Darius Garland had 27 points and a career-high 18 assists and the Cleveland Cavaliers overcame an 18-point deficit to beat the Oklahoma City Thunder 107-102 on Saturday night for their fourth straight victory. Lauri Markkanen made a 3-pointer with 11.4 seconds remaining to secure the victory, Cleveland’s fifth on a six-game, […]
NBA・1 DAY AGO
WJW FOX 8 News Cleveland

Detroit Pistons legend Isiah Thomas recently speculated about what it would be like if star players from today’s NBA were inserted into the league in the 1980s and 1990s. Thomas explained that players like Los Angeles Lakers superstar LeBron James and Brooklyn Nets superstar Kevin Durant would pose massive issues for anyone hoping to stop them in that era.
NBA・2 DAYS AGO
CBS LA

LOS ANGELES (CBSLA) – Superstar LeBron James issued an apology to Los Angeles Lakers fans Sunday after the team’s latest setback. LeBron James of the Lakers goes to the basket against the Denver Nuggets at Ball Arena on Jan. 15, 2022 in Denver. (Getty Images) The Denver Nuggets torched the Lakers by 37 points Saturday night. After a four-game winning streak, the Lakers have lost three straight to drop under .500. They have a 21-22 record and are clinging to the No. 8 seed in the competitive Western Conference. “#LakerNation I apologize and I promise we’ll be better!” James tweeted Sunday. The Lakers came into...
NBA・5 HOURS AGO

James may not have any room in his trophy case by the looks of it.
NBA・4 HOURS AGO
fadeawayworld.net

Kyle Kuzma is back playing at a decent level, but that's not the only comeback he's made this season. The Washington Wizards' young forward was recently pictured with an ex-girlfriend months after they reportedly broke up. The former Los Angeles Lakers player and supermodel Winnie Harlow reportedly broke up in...
CELEBRITIES・22 DAYS AGO
ClutchPoints

Isiah Thomas is one of the most underrated legends that has ever played the game. There's no question that he is extremely overlooked for someone that managed to win two championships and was the face of the "Bad Boy" Pistons. Michael Jordan and Isiah Thomas notably had a rivalry, but...
NBA・2 DAYS AGO

Kevin Durant injured his knee during the game between the New Orleans Pelicans and Brooklyn Nets.
NBA・1 DAY AGO
TMZ.com

LeBron James is quickly getting over the Lakers' struggles and focusing on the positives ... by losing his mind over his wife's latest Instagram post. The Lakers are below .500 with a 21-22 record so far this season, forcing the King to publicly apologize via social media on Sunday. While...
NBA・5 HOURS AGO
95.7 The Game

The Golden State Warriors crushed the Chicago Bull in Illinois on Friday night, and after the game DeMar DeRozan spoke to the media.
NBA・2 DAYS AGO

The Los Angeles Lakers were a hot destination in free agency. Over the summer, multiple players flocked to the team to chase a title alongside LeBron James in the NBA's biggest market. But since the start of the season, things have been less than ideal for the Lakeshow. Through the...
NBA・1 DAY AGO
FastBreak on FanNation

Rajon Rondo has been ruled out for the game between the Cleveland Cavaliers and Oklahoma City Thunder on Saturday night.
NBA・2 DAYS AGO
FastBreak on FanNation

Zach LaVine has been ruled out for the remainder of the game between the Golden State Warriors and Chicago Bulls on Friday night.
NBA・2 DAYS AGO
FastBreak on FanNation

Steph Curry has been ruled out for Sunday's game between the Golden State Warriors and Minnesota Timberwolves.
NBA・1 DAY AGO
Sportsnaut

The pair of former UCLA guards are battling for a spot in the All-Star Game while Jrue Holiday and Lonzo Ball are currently on the outside looking in.
NBA・2 DAYS AGO
Sports Illustrated

The Phoenix star says he's inspired by the late Lakers legend and the iconic phrase, Mamba mentality.
NBA・2 DAYS AGO