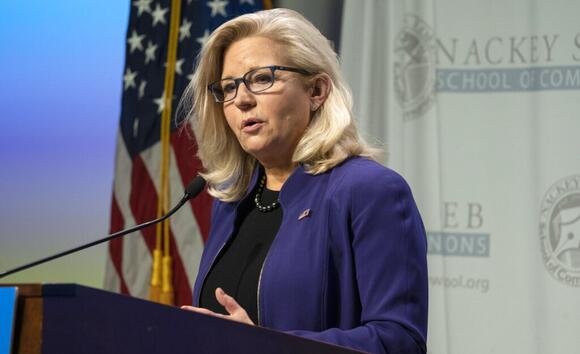 W yoming Republican Rep. Liz Cheney, vice chairwoman of the House select committee tasked with investigating the Jan. 6 attack on the U.S. Capitol, issued a warning to former President Donald Trump amid his posturing that he wanted to debate members of the committee: Lie, and there will be criminal penalties.

Cheney made the comment in a statement before the committee voted to recommend that the House hold former Justice Department official Jeffrey Clark in contempt of Congress and refer him for criminal prosecution.

“President Trump continues to make the same false claims about a stolen election, with which he has misled millions of Americans. These are the same claims he knows provoked violence in the past. He has recently suggested that he wants to debate members of this committee,” Cheney said.

JAN. 6 COMMITTEE SUBPOENAS PHONE RECORDS OF PRIVATE CITIZENS BUT NOT MEMBERS OF CONGRESS

“This committee's investigation into the violent assault on our Capitol on Jan. 6 is not a game. When this committee convenes hearings, witnesses will be called to testify under oath,” she continued. “Any communication Mr. Trump has with this committee will be under oath. And if he persists in lying then, he will be accountable under the laws of this great nation and subject to criminal penalties for every false word he speaks.”

Cheney was ousted from her No. 3 House Republican leadership position largely because of her vocal criticism of the former president in the aftermath of Jan. 6.

This astonishing jump in falsehoods is the story of Trump’s tumultuous reign. By the end of his term, Trump had accumulated 30,573 untruths during his presidency—averaging about 21 erroneous claims a day. What is especially striking is how the tsunami of untruths kept rising the longer he served as president and became increasingly unmoored from the truth. Trump averaged about six claims a day in his first year as president, 16 claims day in his second year, 22 claims day in this third year—and 39 claims a day in his final year. Put another way, it took him 27 months to reach 10,000 claims and an additional 14 months to reach 20,000. He then exceeded the 30,000 mark less than five months later.Should expect criminal charges then..

Psst,come here please I have something to tell you, you're not the president anymore you are a private citizen with all the rights & responsibilities as everyone else ,are we clear? now please sit down and raise your right hand ,GEEZ🤠

This woman is a serious person. She is the only person to let Trump know he is not above the law. Love this woman, she is as strong as it gets. Wyoming should be proud of her.

'We are not gonna take it anymore': Trump borrows from glam metal in defiant Copper State remarks

Former President Donald Trump quoted from a glam metal anthem to express his displeasure at his successor's decision-making.
POTUS・1 DAY AGO
The Independent

Republican senators rallied to the defence of Sen Mike Rounds this week after he was attacked by former President Donald Trump.Mr Rounds sparked a feud with the former president when he went on ABC’s This Week on Sunday and reiterated that he did not believe conspiracy theories supported by Mr Trump and his allies about the 2020 election, namely the assertion that Mr Trump had in fact won the election."We simply did not win the election, as Republicans, for the presidency,” Mr Rounds said on Sunday.“[I]f we simply look back and tell our people don't vote because there's cheating going...
PRESIDENTIAL ELECTION・22 HOURS AGO

The MyPillow founder made the remarks at Trump's Arizona rally, where many speakers touted conspiracy theories about the 2020 election.
PRESIDENTIAL ELECTION・23 HOURS AGO
Newsweek

Mitt Romney made the comment Sunday after Lindsey Graham said he'd only back McConnell if he mends his relationship with Trump.
PRESIDENTIAL ELECTION・22 HOURS AGO
Newsweek

"I think anyone with common sense would be reluctant to go talk to this committee," the GOP congressman said.
CONGRESS & COURTS・19 HOURS AGO
mediaite.com

CNN anchor Kate Bolduan pulled no punches after House Minority Leader Kevin McCarthy was grilled about the Jan. 6 committee at a press conference, exclaiming “HE WAS LYING!”. Seconds after McCarthy exited his weekly press conference after enduring a contentious grilling about the House Select Committee Investigating the Jan....
CONGRESS & COURTS・3 DAYS AGO

"This entire indictment echoes the words, the conduct, the crimes of Donald Trump," Glenn Kirschner said in a Saturday video.
POTUS・1 DAY AGO
Newsweek

Representative John Katko, a New York Republican, announced on Friday that he would not seek another term this year.
POTUS・2 DAYS AGO
AOL Corp

Jan. 6 hearings 'are going to blow the roof off the House,' Raskin says

On a Thursday Zoom call with progressive activists, Rep. Jamie Raskin, D-Md., said that the upcoming hearings by the Jan. 6 select committee probing the riot at the U.S. Capitol staged by supporters of former President Donald Trump will “blow the roof off the House.”. “We are going to...
CONGRESS & COURTS・2 DAYS AGO
Newsweek

The House minority leader mocked the idea that Democrats would consider a presidential candidate "the country has rejected."
PRESIDENTIAL ELECTION・3 DAYS AGO

Donald Trump's rally in Arizona was largely in line with expectations. The former president lied about his election defeat; he needlessly seeded racial resentments with false claims about white people lacking access to vaccines; and the Republican even lent his support to a discredited conspiracy theory about the FBI. But...
POTUS・4 HOURS AGO
Newsweek

The cartoon pictures the GOP congressman as a dog, with a red tie functioning as a leash being held by Trump's hand.
OHIO STATE・3 DAYS AGO
Reuters

WASHINGTON, Jan 17 (Reuters) - The U.S. midterm elections are some 10 months away, but President Joe Biden's administration and allies already foresee a possible scenario in which Republicans take the House of Representatives, the Senate, or both, and launch a series of investigations and attempts to impeach the president.
PRESIDENTIAL ELECTION・4 HOURS AGO
Newsweek

Democratic Rep. Jamie Raskin said the ongoing Capitol riot investigation revealed that some in the mob called for the lost items a day after taking over the building.
PROTESTS・2 DAYS AGO
Washington Post

Let’s be clear: In refusing to testify to the House select committee examining Jan. 6, House Minority Leader Kevin McCarthy may well be helping to cover up potential crimes committed by Donald Trump. The California Republican has announced that he will not cooperate with the select committee, which has...
POTUS・4 DAYS AGO
The Guardian

The former president still is angry that key agenda items got stymied in the chamber. He doesn’t want that to happen again.
POTUS・4 DAYS AGO
POLITICO

Judge mulls whether Trump’s silence on Jan. 6 could amount to ‘agreement’ with rioters

During a hearing on civil lawsuits stemming from the Capitol attack, Donald Trump’s lawyers claimed sweeping immunity for the former president.
PROTESTS・6 DAYS AGO