#The Killer#Avants#Tylerperry#The Neighbors Of Watts 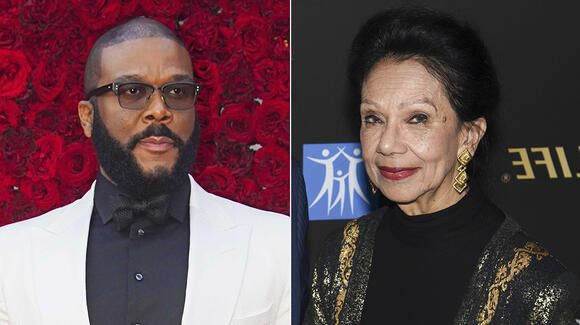 Tyler Perry has shared his mourning over the death of Jacqueline Avant , stating that “every available resource will be used” to help find the philanthropist’s killer. Avant, the 81-year-old wife of music industry legend Clarence Avant and mother of Nicole Avant, was fatally shot early Wednesday morning by a home intruder at her Beverly Hills residence.

“My heart breaks for Clarence and Nicole and all the Avant family. This world can be so cruel and cold!!” Perry wrote on his official Twitter. The media figure also shared several images of the Avants. “I have no idea what kind of sub-human could shoot an 81 year old woman, and in her own home.”

“But you can rest assured that every available resource will be used to find whoever is responsible for this awful nightmare,” Perry wrote in a second Tweet. “This is tremendously sad.”

During a press conference on Wednesday afternoon, Beverly Hills police chief Mark Stainbrook stated that investigators are continuing to search the scene for clues. He also advised that the public help in apprehending the killer, who remains at large.

Stainbrook also shared a message from the Avant family during the press conference: “Jacqueline was an amazing woman — a wife, mother, philanthropist and a 55-year resident of Beverly Hills who has made an immeasurable positive contribution and impact on the arts community. She will be missed by her family, friends and all the people she has helped throughout her amazing life.”

Jacqueline Avant was well-known in the entertainment industry for her philanthropic work, including her service on the board of directors of UCLA’s International Student Center and as president of the Neighbors of Watts.

Wow. As a proud auntie of mix race within my entire familyI so much hurting every time I read all this back and forth hate because of skin color.. My wish for this New Year. May we begin this new year not looking at our skin color and let's try working together as one people. This world would be such a beautiful place.. Happy New Year to ALL...YESSSSSSSSS ALL....🥰

I just wished that this type of resource was available to elderly people who were killed regardless of their social standing. That saddens me

Tiffany Haddish was arrested early Friday in Georgia on suspicion of driving under the influence, police said. Haddish, the comedian and star of “Girls Trip” and “The Last O.G.,” was arrested after driving into the yard of a residence in Peachtree City, Ga., according to a statement from the local police department. Officers had received a report around 2:30 a.m. of a driver asleep at the wheel on Highway 74, according to the statement. Police located the vehicle and conducted a traffic stop, after which Haddish was arrested. Haddish was booked into Fayette County Jail without incident. TMZ, which first broke the news,...
PEACHTREE CITY, GA・3 DAYS AGO
Variety

J.K. Simmons on ‘Being the Ricardos,’ His ‘Spider-Man’ Evolution and the Truth Behind His Jacked Body

J.K. Simmons seemed destined to star in an Aaron Sorkin film and he finally does in Amazon Studios’ “Being the Ricardos.” But the two actually crossed paths years earlier. “My first Broadway play, I was an understudy replacement in ‘A Few Good Men,’” Simmons tells Variety’s Awards Circuit podcast. Simmons played the role of the Doctor (which is not in the film version) but also had the opportunity to play the role of Col. Nathan Jessup – the role Jack Nicholson made infamous in Rob Reiner’s film version. “It remains to this day maybe the best role I’ve ever had,”...
MOVIES・11 DAYS AGO
Variety

Left out of most obituaries about renowned country music talk-show host Ralph Emery, who died Saturday, was his infamy among many rock fans for having gotten into a tiff in the late 1960s with the Byrds. Their beef even resulted in Emery being dismissed, by name, in a Byrds track — “Drug Store Truck Drivin’ Man,” which had Gram Parsons and Roger McGuinn attempting to get the last laugh in song. But, lest Emery be remembered forever by Byrds buffs as a villain in the story, Emery invited McGuinn onto his highly rated cable series “Nashville Now” 17 years later for...
MUSIC・1 DAY AGO
TVLine

Tyler Perry isn’t playing around when it comes to COVID vaccinations. His Tyler Perry Studios in Atlanta will enforce an across-the-board vaccine requirement for all cast  and crew members, according to our sister site Deadline. Hollywood unions and major studios’ return-to-work protocols in June of last year didn’t mandate vaccinations, but gave producers “the option to implement mandatory vaccination policies for casts and crews in Zone A” — where the actors perform, and their immediate proximity — “on a production-by-production basis.” Both Disney and Netflix previously established a policy for their own U.S. productions, requiring vaccinations for everyone working in Zone A....
PUBLIC HEALTH・11 DAYS AGO

Over the last several years, Tyler Perry has become well known for consistently putting out new content. Among his latest offerings is the BET+ series Ruthless which debuted in March of 2020. The series, which is a spin-off of The Oval, follows a woman named Ruth Truesdale who becomes entangled with a cult. As part of the group, she turns on several people including her best friend. Like many of Perry’s other shows, Ruthless features a cast of up-and-coming actors as well as people who have been in the industry for several years. Even if you’re not a fan of the show, you might want to make note of its stars because you’ll probably be seeing a lot more of them over the years. Keep reading to learn more about the cast of Ruthless.
NFL・13 DAYS AGO
tvseriesfinale.com

Last year, the Sistas TV show was BET’s top-rated scripted series. Will it continue to be a solid performer and be renewed for season five or, could it be cancelled instead? Stay tuned. A comedy-drama series, the Tyler Perry’s Sistas TV show stars KJ Smith, Mignon, Ebony Obsidian, Novi...
TV SERIES・11 DAYS AGO
TVLine

The only characters on Tyler Perry’s Sistas who know for sure if Hayden is dead or alive are Fatima’s goons and Hayden himself. The rest of us will have to find out when the soapy and addictive drama airs this Wednesday at 9/8c on BET. Until then, a video of behind-the-scenes footage from Season 4 has been circulating all over the interwebs ever since the receptionist told Andi and Fatima that their coworker Hayden had been found dead in the garage in last week’s season opener. While some celebrated Hayden’s passing in some of the funniest tweets, memes and GIFs known to...
TV SERIES・6 DAYS AGO
TVLine

In Season 2 of Tyler Perry’s Sistas, Gary’s soon-to-be ex-wife Jasmine rolled up on Andi with a couple of lady goons she had paid to rough up the attorney. Andi fought back as best as she could against all three of her attackers in the parking garage at her job, but she wasn’t able to break free until her girl Fatima rolled up with a Glock and shut down their beat down. Fast forward to Season 4, and now Fatima could use Andi’s professional and personal support, especially if Hayden presses charges, but will Andi pull up? KJ Smith, who stars...
TV SERIES・3 DAYS AGO

#The Killer#Avants#Tylerperry#The Neighbors Of Watts
tvseriesfinale.com

Tyler Perry’s Sistas: Season Five? Has the BET TV Series Been Cancelled or Renewed Yet?

The complicated love lives of four singles continues on Tyler Perry’s “Sistas” this week. “Sistas” Season 4 premieres on BET on Wednesday, Jan. 5, at 9 p.m. ET (6 p.m. PT). You can also watch the show on Philo and FuboTV. The comedy-drama series picks up...
TV & VIDEOS・12 DAYS AGO
Syracuse.com

“Tyler Perry’s The Oval” Season 3 returns to BET on Tuesday, Jan. 11, at 8 p.m. ET (5 p.m. PT). You can also watch the show on FuboTV, Philo and Sling. The show, produced by Tyler Perry, “captures the volatile relationship between the President, First Lady and First children as they navigate their new life in the White House.”
TV & VIDEOS・6 DAYS AGO

The Oscar winner was 94.
CELEBRITIES・10 DAYS AGO
nwahomepage.com

Check out this quick look at trending stories in Good Day NWA’s Hot Topics brought to you by “An Officer and a Gentleman” at Walton Arts Center. If you’re following the superstar on social media, singer Adele is not taking it easy on fans, then you know she teased a new song “Oh My God.” Checkout this video from Adele’s social media with the caption “rested and re-set feeling ready for 2022. There’s so much coming.” Adele released her highly anticipated album “30” back in November, and is showing no signs of slowing down.
MUSIC・10 DAYS AGO
HollywoodLife

Rihanna & A$AP Rocky: Why Barbados Was The ‘Perfect’ Place To Celebrate The Holidays Together

Rihanna and A$AP Rocky spent the festive season hanging out with both sides of their family in Barbados. Find out why it was the ‘perfect’ vacation!. Rihanna and boyfriend A$AP Rocky celebrated the holidays once again in her home country of Barbados, where the rapper also has family — and the trip couldn’t have been more perfect! After getting all dolled up for a New Year’s Eve bash, the adorable couple played the rest of the festive vacation relatively low-key, allowing for them to spend some quality time with their relatives, according to an insider who spoke EXCLUSIVELY with HollywoodLife.
CELEBRITIES・12 DAYS AGO
Us Weekly

It’s Kody Brown‘s rules — and the others are just living by them. During the Sunday, December 26, episode of Sister Wives, that’s exactly what Robyn Brown tries to explain to Janelle Brown, Meri Brown and Christine Brown. In Us Weekly‘s exclusive sneak peek of the...
FAMILY RELATIONSHIPS・26 DAYS AGO
Radar Online.com

Bob Saget’s suspected cause of death has been revealed and cops believe the late comedian “suffered a heart attack or a stroke” due to the circumstances in which they found his body. Article continues below advertisement. According to Daily Mail, authorities that arrived at Saget’s Ritz-Carlton hotel...
CELEBRITIES・6 DAYS AGO
arcamax.com

Megan, 35 - who has Noah, nine, Bodhi, seven, and Journey, five, with her ex-husband Brian Austin Green - loved the proposal and "thought it was beautiful and perfect". The insider told People: "She is excited to get married." The loved-up duo first started dating in May 2020 after meeting...
CELEBRITIES・4 DAYS AGO
Closer Weekly

Ever since they began dating in 2013, socialite Lauren Silverman has made her fiancé, Simon Cowell, feel like one lucky guy! Although fans never imagined it would happen, the beloved TV star found his one true love and has been living a life of bliss ever since. In January...
CELEBRITIES・5 DAYS AGO
TODAY.com

Watch makeup-free Michelle Obama do a birthday dance for cake

Former First Lady Michelle Obama celebrated her 58th birthday makeup-free, dancing, and ready to eat all the cake. "Here’s to a sweet 58th! Thank you so much for your outpouring of love. Whether you texted, emailed, or posted on social media, every birthday message I received today meant a lot to me," the best-selling author wrote in an Instagram post commemorating her birthday. "I am so grateful to have so many people cheering me on. Looking forward to seeing what this upcoming year has in store."
THEATER & DANCE・2 HOURS AGO